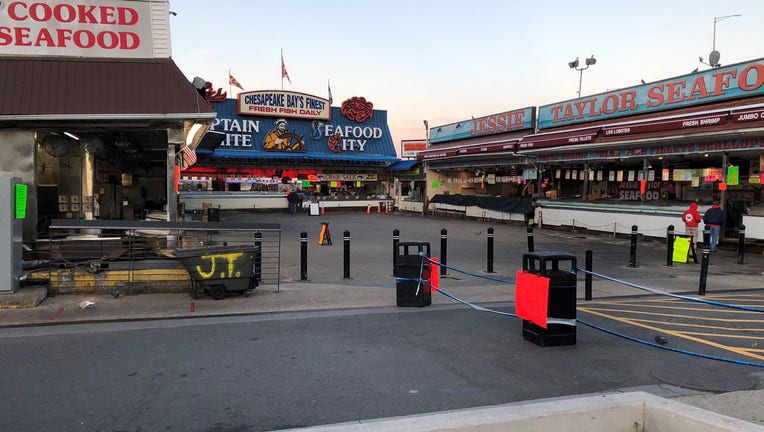 Emergency signs say the closure will remain in place until April 24th, but the Mayor’s office tells FOX 5 city leaders will give the market operators a chance to reopen.

Workers, delivery trucks, even customers – they all arrived before 7 a.m. to find orange “Emergency Closure Notice” signs posted throughout the market on Sunday morning. The date and times were marked as having gone into effect mostly after 11 p.m. the night before.

D.C. shuts down Fish Market at the Wharf

The closure comes after images posted on social media sparked a huge backlash. The images showed a packed Wharf by the Fish Market on Saturday, with plenty of people not keeping their distance despite signs telling them to stay six feet apart. An emergency “Stay At Home” order issued by D.C. Mayor Muriel Bowser went into effect this week, encouraging people to stay home and limit their exposure to others as much as possible.

Celebrity chef Jose Andres was one of the first high-profile figures to call for the market's closure:

Some fish market employees walked away stunned and others were disappointed after arriving to work to find the market closed.

“I probably would be too. I mean, a lot of people not working now,” Greg Sellers, a would-be customer who drove from Woodbridge, Va., said. “I thank God I’m working, I appreciate that. But yea, I would probably be upset.”

Sellers said he understood the shutdown after Fox 5 showed him images of the packed market Saturday.

Penny White and her husband, who own Captain White Seafood City, went to the Wharf on Sunday morning to speak to their staff. White told FOX 5 in her frustration, they did present a COVID-19 safety plan to officials.

“I got a plan right here. Showed it to the Mayor earlier in the week,” White said. “No way were we expecting that many people yesterday. I’m willing to modify to make it right. I want people’s safety just as well as anyone else. We all do. I have my families here.”

The family told FOX 5 more than a 100 employees are involved and that the market also honors food stamps for this in need.

“Yesterday I was told, 'look in the morning you guys have to have a plan of what you want to do if we’re going to continue to keep you open' and I said, 'Yes, you know, we’re willing to do anything that we can do.," Pete White, Penny White's son, said.

"I agree this is not what we want, but you know once we get X amount of people in a certain area, you can’t try and disperse the crowd without officers."

D.C. Police tell FOX 5 they arrived at around 4:40 p.m. Saturday to disperse the crowd and that no arrests were made.

By Sunday morning D.C. police had blocked off other parts of the Wharf in addition to the Fish Market. Officers used their cruiser loudspeakers to tell market customers, “The Wharf is closed. Go home!”

A Spokesperson with the Mayor’s office tells FOX 5 they will give vendors a chance to reopen.

“The notice shall remain in effect until April 24 which is the last day of the public health emergency (subject to change). Since food is essential, the operators will be able to present a plan for social distancing to the Department of Consumer and Regulatory Affairs (DCRA). If the plan allows for safe operations, the venue will be allowed to reopen, and DCRA and DC Health would continue to monitor compliance,” wrote the Spokeswoman with the Mayor’s Office, LaToya Foster.

Any food orders from other businesses on The Wharf are currentlly brought out to customers on Main Avenue.

A spokeswoman for The Wharf tells Fox 5 the neighborhood association respects the DCRA's decision, and that the area remains open for essential travel to homes and grocery stores, among other places.

"If the Fish Market vendors can satisfy DCRA that sufficient measures will be taken so that they can operate safely, we likewise will respect a future decision of DCRA to allow the Fish Market vendors to reopen," the spokeswoman said in a statement. "All of us at The Wharf will continue to encourage complete compliance with the Mayor’s mandate in this most challenging time."

Sellers recalled one flood that only temporarily shut down a few operators. However, in his some 40 years of coming to the market, he said “First time I ever seen it like this. Wow.”