D.C. Mayor Muriel Bowser announced Thursday that she is declaring a public emergency and creating a new office to provide services for migrants being bused into the District from border states such as Texas. FOX 5's Stephanie Ramirez reports.

WASHINGTON (FOX 5 DC) - D.C. is declaring a public emergency and creating a new office to provide services for migrants being bused into the District from border states such as Texas, Mayor Muriel Bowser announced Thursday.

Texas and Arizona have reported that approximately 9,400 people have been bused to D.C. since April. Both states have pledged to continue – and expand – busing operations indefinitely.

The public emergency will direct the Director of the Department of Human Services to provide temporary services and supports to migrants arriving from southern border states.

It also authorizes the City Administrator and agency directors to establish new programs and expand or modify existing programs in response to the emergency.

Declaring a public emergency grants Mayor Bowser administrative authority not typically held by her office for 15 days, such as creating the Office of Migrant Services.

D.C. is declaring a public emergency and creating a new office to provide services for migrants being bused into the District from border states such as Texas, Mayor Muriel Bowser announced Thursday.

Mayor Bowser says she will be submitting a request to the DC Council to extend the emergency.

The new office will be called the Office of Migrant Services and $10 million has been allocated for it with the District seeking reimbursement from FEMA. It will provide support with the reception of migrants, meals, temporary accommodations, urgent medical needs, transportation, connection to resettlement services, translation services and more.

The District is putting in place a framework to meet all buses and facilitate onward travel for those who plan to move on from D.C.

The framework also includes triaging the needs of people arriving in D.C. and tending to their basic needs.

The District also plans to set up a system that is separate from the homeless services system to respond to migrants being bused into D.C.

Mayor Bowser says declaring the public emergency gives the District more flexibility on the procurement of resources to assist migrants. She says she plans to emergency legislation to the DC Council to codify new migrant services.

After being released, some migrants have been offered free rides to D.C. paid for by the state they are coming from. 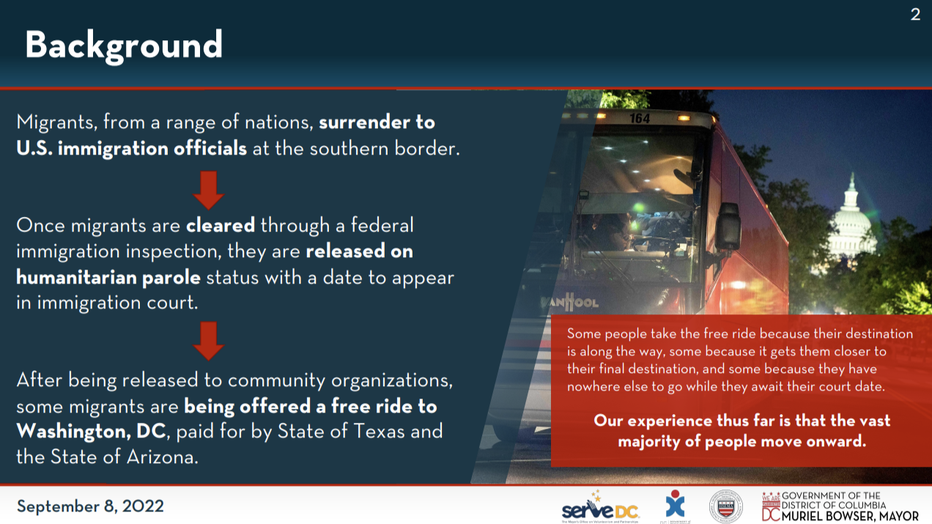 "Some people are taking this ride to get to their destinations along the way because it gets them closer to their final destination," says Mayor Bowser. "And some, because they have nowhere else to go and, quite frankly, I believe that some are being tricked or lied to."

Mayor Bowser's request for the National Guard to assist with the influx of migrants arriving in the District was denied twice by the Department of Defense. FOX 5 asked Mayor Bowser why a response like this was not initiated sooner.

"We think we're actually taking it at the right time," says Mayor Bowser. "We have responded in a lot of different stages not knowing the full capacity of what we would be dealing with day-to-day or month-to-month. So, we thought it was very appropriate that we worked with our partner organizations who are very experienced in this work, who have done migrant services work, to work with them…The volume of the work and our expectation that that could increase really necessitates a broader coordination from us."

The mayor continues to encourage support from the federal government. 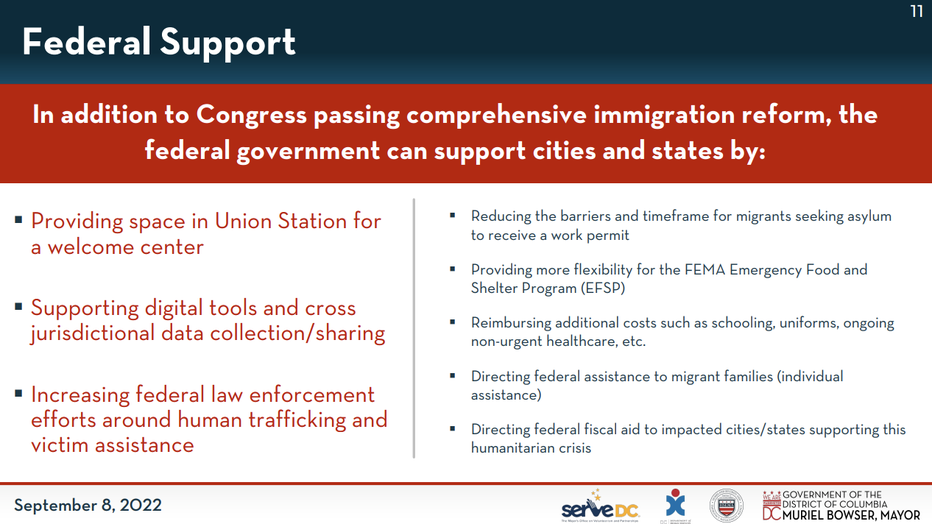 Local volunteers on the front lines of the crisis have been calling on D.C. officials to step up additional resources for to help asylum seekers.

Protestors aren't pleased with how Mayor Muriel Bowser is handling the migrant situation in D.C. On Thursday, demonstrators crashed her early birthday event in Southwest to ask her why she isn't providing sanctuary for the migrants being dropped off in D.C. from border states.

Del. Eleanor Holmes Norton introduced an emergency appropriations bill last month that would provide an additional $50 million for humanitarian assistance, like food and shelter, for migrants.

The District is also establishing an Office of Migrant Services to better direct resources from the D.C. government to assist with the migrant crisis.