The D.C.&nbsp;Council&nbsp;voted unanimously Tuesday in favor of emergency legislation on police reform.

WASHINGTON (FOX 5 DC) - The D.C. Council voted unanimously Tuesday in favor of emergency legislation on police reform -- a measure that limits police use of force, puts discipline in the hands of management, and changes policy on body-worn cameras.

The 13 votes in favor came against a warning from the police union that the council members were making a mistake.

All 13 councilmembers spent several hours debating the legislation and discussing how far it should go. Ultimately voting 13-0 in favor of making drastic changes in the way police go about their jobs and the way they are held accountable. 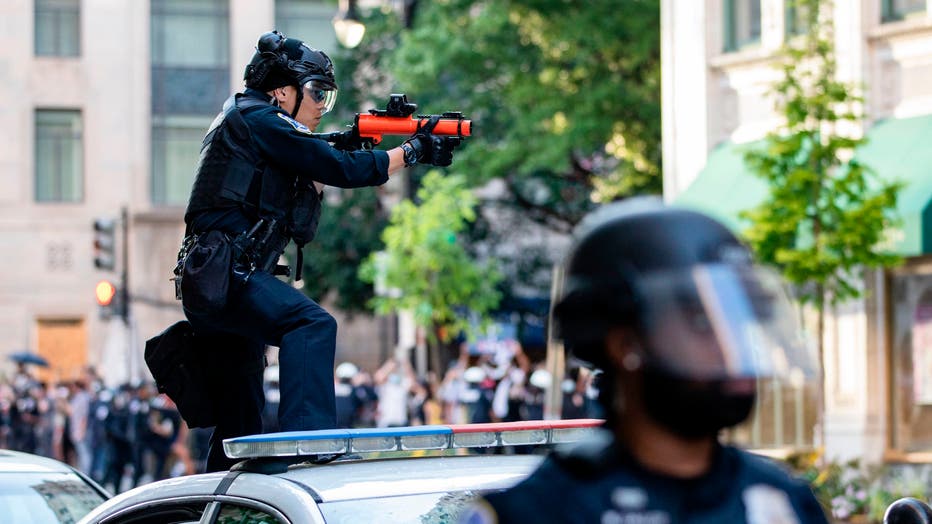 A DC Police officer stands on the back of a police cruiser with smashed windows as he aims a non-lethal launcher at protestors as they clash with Police after the death of George Floyd at the hands of Minneapolis Police in Washington, D.C. on May 31,

Here are some highlights from the bill:

D.C. Council Chairman Phil Mendelson explained why it was important to pass emergency legislation without hearing from public witnesses or the police.

"There is an urgency here, there is an urgency for a couple of reasons because people are demanding this, and legitimately, but there is also an urgency because we have been through this before and we have seen 'oh yeah, we are going to make changes' and then changes don't occur," said Mendelson. "I think that the police union makes a mistake if they only put up resistance."

The legislation as passed is good for 90 days and makes many changes in the way policing is done in the District -- changes the D.C. Police Union call a disservice to the citizens of the District who have been plagued with violent crime for years.

The recent protests over the killing of George Floyd in Minneapolis have created a wave of support for police reform.

In this legislation, using a neck restraint would be a felony.

The D.C. Police Department's general orders already prohibit the use of a chokehold.

Until now, there was no policy on when to publicly release the name of an officer-involved in a fatal use of force.

D.C. Mayor Muriel Bowser is against the body-worn camera section of the legislation and is asking the council to hold public hearings before taking a vote on the measure in July that would extend the law for 225 days.

Two council members asked for and got a favorable vote on forming a commission to investigate police reform and have a report written before the end of the year.

The D.C. Police Union says the bill as proposed would undoubtedly result in an exponential increase in crime and a mass exodus in personnel.

DC Police are responding to reforms discussed by the DC Council earlier this week.