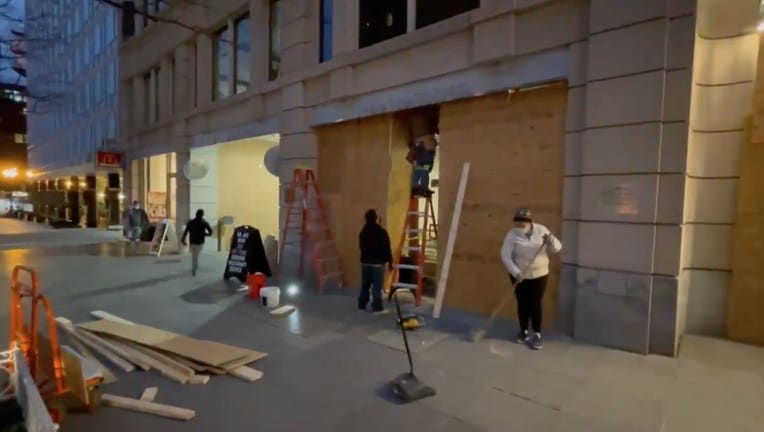 WASHINGTON (FOX 5 DC) - Businesses in the District are once again boarding up days before planned pro-Trump protests in the nation's capital.

READ MORE: Here is how DC is planning to manage pro-Trump protests this week

The Washington Post reports four protests are permitted for Wednesday, the day when Congress will certify the Electoral College votes for President-elect Joe Biden.

The protests are planned in Freedom Plaza, near the Capitol and the Washington Monument.

During a press conference on Monday, Mayor Muriel Bowser confirmed that the National Guard will be assisting with crowd management at the protests beginning on Tuesday.

She also said that all Metropolitan Police Department officers will be required to work on Tuesday and Wednesday.

Bowser is urging D.C. residents and others from across the region to stay home and avoid the downtown area where the protest activity is set to take place.

"I am asking Washingtonians and those who live in the region to stay out of the downtown area on Tuesday and Wednesday and not to engage with demonstrators who come to our city seeking confrontation, and we will do what we must to ensure all who attend remain peaceful," Bowser said in a statement released Sunday.

Violent fights, vandalism of Black churches, and a stabbing broke out at pro-Trump election results protests in the District in November and December.