D.C. Attorney General Karl Racine is putting Liberty Tax on notice after filing a lawsuit against the company claiming it mislead and secretly increased the cost of tax preparation for thousands of D.C. taxpayers. FOX 5 Nana-Séntuo Bonsu has the details.

WASHINGTON - D.C. Attorney General Karl Racine is putting Liberty Tax on notice after filing a lawsuit against the company claiming it mislead and secretly increased the cost of tax preparation for thousands of D.C. taxpayers.

Liberty Tax is the 3rd largest taxes filer in the nation -with multiple offices in the District.

"This is a massive company that has engaged in flagrant fraud," says Racine.

The attorney general is seeking justice for more than 1,000 D.C. residents who were just trying to do the right thing, file their taxes.

Racine says, "Liberty Tax offered tax filers $50 in cash over and over again in their advertisements showing big green money."

He believes the tax company targeted some of the city's most vulnerable residents with the free $50 promotion. 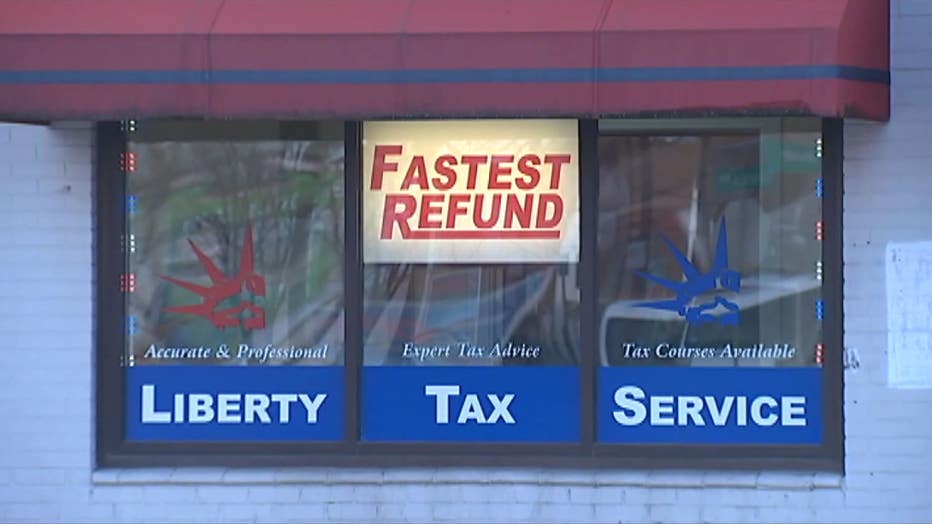 "Liberty Tax set up shop to take advantage of people who work very hard for every dollar they get and don't have the money to waste and yet alone be stolen from them," Racine adds.

"They handed the individuals $50, and they proceeded to take advantage of them monetarily and they charged them money that they didn't have to charge them for that made up for the $50 they gave out and more," said Racine.

Meaning many residents ended up paying more to file their taxes.

Racine says "our investigation reveals that Liberty Tax charged the recipients $50 more for services than individuals who did not take advantage of the fraudulent trick.

This trick was reported to the AG's office after a woman who filed her taxes was getting the run around. She reached out to local legal aid organization, Tzedek D.C. and they notified Racine's office.

A tax fraud lawsuit against a D.C. billionaire has been announced by Attorney General Karl Racine who says technology executive Michael Saylor has lived in the District for more than a decade but has never paid any income taxes.

In a statement from the director of Tzedek D.C., their director Ariel Levinson-Waldman says:

"Liberty Tax deceived D.C. resident consumers, led them down a maze of fine print, and pressured them into entering unfair contracts. We're grateful that Attorney General Racine and the D.C. OAG are holding Liberty Tax accountable for targeting D.C. residents with low incomes.  This problem is something that we have seen firsthand from the community members we serve, in particular in Ward 7, and it is a practice that needs to be reformed.  D.C. residents should know that they aren't being cheated when filing their taxes. We're committed to helping residents exercise their full set of rights under the law not to be deceived or abused by unscrupulous business practices.  This case is also a great example of how when residents put their hand up and help flag a problem, service providers at Tzedek D.C. and sister agencies around D.C. can work with the OAG to ensure justice gets done."

Racine does not believe this only taking place in D.C.

"Nationwide we are getting calls off the hook from other jurisdictions who are concerned that liberty tax is doing the same thing they did to D.C. residents," he adds.

The AG's office is using this unfortunate event to let the public know about their free tax services.

"We also want to inform D.C. tax-filers of numerous resources that provide tax assistance for free—with volunteers trained and certified by the Internal Revenue Service. These free resources assist low-income residents, seniors, people with disabilities, and people with limited English proficiency with preparing their taxes each year," said Racine.

When Steven Glazerman received mail from the District of Columbia's Office of Tax and Revenue, he says his wife almost fell out of her chair. That's because the bill they were sent was nearly $24,000 more expensive than they expected.

FOX 5 reached out to Liberty Tax for comment, and we are waiting to hear back.

To report unfair business practices in the District, you are asked to contact the OAG's Office of Consumer Protection at 202-442-9828.