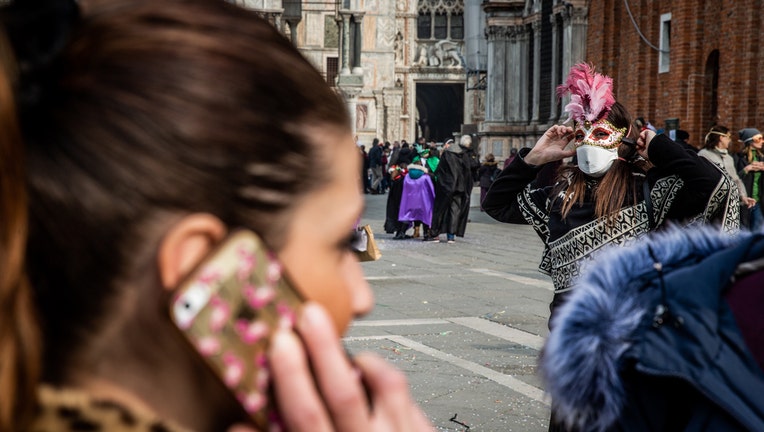 People wearing protective masks in Venice, Italy, on February 23, 2020 due to concerns over coronavirus infection. President of the Luca Zaia has suspended the carnival in Venice due to the coronavirus outbreak in northern Italy. (Getty Images)

The number of novel coronavirus cases in Italy and South Korea leaped upward on Sunday, spurring authorities to take new steps in an effort to fight a soaring viral outbreak now blamed for at least eight deaths in Iran.

Italian authorities announced they were shutting down carnival events in Venice as at least 133 people have been reported to have been infected with COVID-19 in the country. Nearly all of Italy's cases are clustered in the north, including in the northeast Veneto region, which includes Venice.

The dozens of newly confirmed cases have caused all schools and universities to be closed not only in Milan, but in the entire region of Lombardy, for an indefinite period of time as movie theaters, concerts and public gatherings have also been banned.

Italy's first cases -- that of a married Chinese couple who were on vacation in Rome -- surfaced in early February. To date, two deaths have been reported in the country while 27 are reported to be in intensive care as of Sunday, officials told Fox News.

Among the "extraordinary measures" announced by Italian officials include effectively quarantining about a dozen towns in the northern regions of Lombardy and Veneto, where some 50,000 people live, according to the BBC.

Bishops in several dioceses in northern Italy issued directives Sunday that holy water fonts be kept empty, that communion wafers be placed in the hands of the faithful and not directly into their mouths by priests celebrating Mass and that congregants refrain from shaking hands or exchanging kisses during the symbolic Sign of the Peace ritual, according to the Associated Press.

Archbishop Rino Fisichella, a Vatican official whose siblings live in one of the hardest-hit towns, Codogno, declined to dramatize the measures.

"It's obvious that we need to use all necessary prudence" to avoid spreading the virus among the faithful, he said.

South Korean President Moon Jae-in said Sunday that he was putting his country on its highest alert for infectious diseases and ordered officials to take “unprecedented, powerful” steps to fight the soaring viral outbreak that has infected more than 600 people in the country in the past few days.

Moon said his government had decided to increase its anti-virus alert level by one notch to “Red,” the highest level that allows authorities to order the temporary closure of schools and reduce the operation of public transportation and flights to and from South Korea.

The South Korean leader said that the outbreak “has reached a crucial watershed,” and that the next few days will be “critical.” 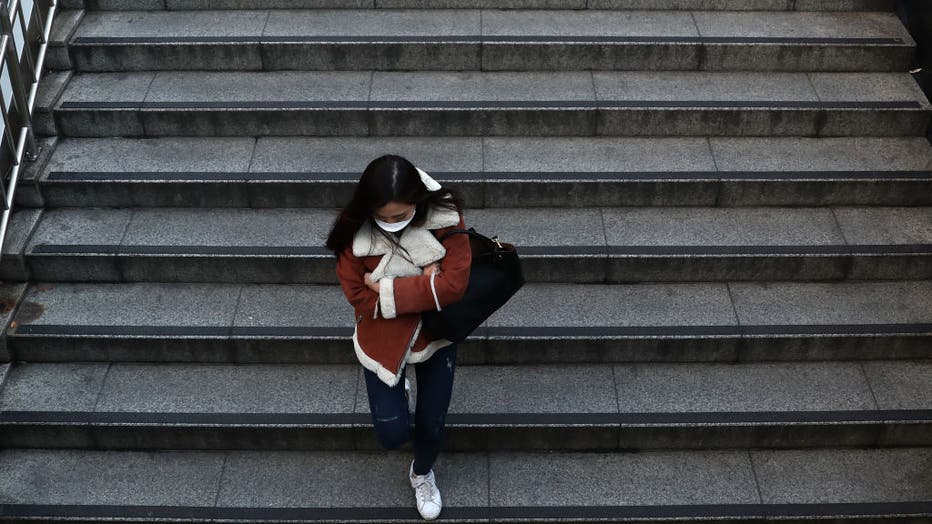 A woman wearing a mask to prevent the coronavirus (COVID-19) walks along the street on Feb. 22, 2020 in Seoul, South Korea. (Photo by Chung Sung-Jun/Getty Images)

While the number of patients worldwide is increasing, some virus clusters have shown no link to China and experts are struggling to trace where those clusters started. The World Health Organization said Saturday that at least 18 confirmed cases have been reported in Iran.

Iran's health ministry said Sunday that at least eight people have died in that country's outbreak, which was first reported on Wednesday and centered mostly on the city of Qom.

While WHO has not yet said where the Iran cases may have originated, the country's health minister, Saeed Namaki, told state TV that officials were nearly certain the virus came from China to Qom in central Iran. Among those who've died from the virus was a merchant who regularly shuttled between the two countries using indirect flights in recent weeks, after Iran stopped direct passenger flights to China, according to Namaki.

He did not say when the merchant had returned from China to Iran nor what steps health officials had taken to quarantine and check on those he'd come into contact with.

Health officials said they would help make face-masks and sanitizers available for Iranians, amid concerns that inventory was running low in the capital's pharmacies.

Iranians also went to the polls on Friday for nationwide parliamentary elections, with many voters wearing masks and stocking up on hand sanitizer. Iran’s interior ministry on Sunday said voter turnout in last week's parliamentary elections stood at 42.57 percent, the lowest ever since the country's 1979 revolution that ushered in a Shiite clerical government to power.

Supreme Leader Ayatollah Ali Khamenei claimed that Iran's enemies tried to discourage people from voting by exaggerating the threat of the virus, according to Reuters.

“This negative propaganda about the virus began a couple of months ago and grew larger ahead of the election,” said Khamenei, according to his official website Khamenei.ir. “Their media did not miss the tiniest opportunity for dissuading Iranian voters and resorting to the excuse of disease and the virus.”

Fox News' Courtney Walsh in Rome and the Associated Press contributed to this report.