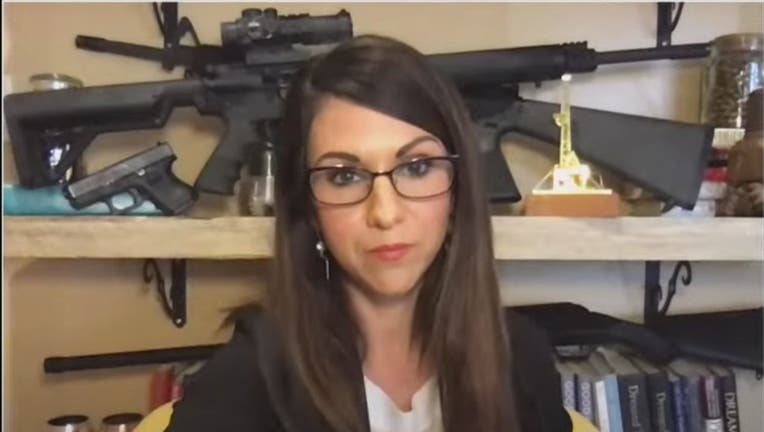 U.S. Rep. Lauren Boebert, R-Colo., responded Thursday night after a California Democrat accused her earlier in the day of having a "gun fetish" because some weapons were visible on a shelf inside her home during a Zoom call with other lawmakers.

During an appearance on "Fox News @ Night," Boebert called U.S. Rep. Jared Huffman a creep and claimed his "disdain for the Constitution was on full display."

"Rather than having a productive debate about policy ... Democrats were too busy mocking the Constitution and disrespecting the everyday Americans that I was elected to represent," Boebert told Fox News' Mike Emanuel.

"This was my first committee hearing and the chairman couldn't stop attacking, degrading, and insulting committee members," she continued. "I am busy fighting against the left's real fetish for power and stripping Americans of their constitutional rights."

Boebert also addressed a Twitter post by California Democrat Katie Porter, who wrote about Boebert's gun display: "I always thought my dirty dishes piled up and accumulating bacteria were the most dangerous thing in a Zoom background."

"It's kind of alarming that she has so many dishes in her sink collecting bacteria," Boebert responded. "Do your dishes, Hon."

Boebert said she put up the gun display in response to the House Committee on Natural Resources wanting to ban firearms. She reminded Democrats on the panel that they had taken an oath to uphold the Constitution.

"If somebody wants to have a shrine to their gun fetish as a Zoom backdrop in their private life they can do that," Huffman said during the meeting. "But this is our ‘hearing room,’ and at some point we will get past the COVID epidemic, and we’ll all start showing up in person, and our safety and our ability to conduct business civilly without feeling threatened is a relevant consideration, unfortunately."

His "shrine" reference knocked the four-gun display seen behind Boebert in the course of a discussion on firearms in the Capitol complex during the virtually held meeting. In a tweet later in the day, he again accused Boebert of "fetisihizing weapons."

The display appeared on a bookcase in Boebert’s private home in Rifle, Colo., according to a spokesman for her office.

As members mulled a firearms ban during committee hearings, she asked Chairman Raul Grijalva, D-Ariz., whether a handful of other constitutional amendments would be infringed upon.

"How about the Nineteenth Amendment? Can women vote in this committee?" asked Boebert. "Why does anyone think that they can cherry-pick the Second Amendment and say this is the one enumerated right that we can take away from people?"

Before she was elected to Congress, Boebert owned a gun-themed restaurant called Shooters Grill.

"Why stop with the Second Amendment?" she continued. "Let’s go ahead and quarter soldiers in this committee room. There’s plenty of soldiers in the parking garage at ‘Fort Pelosi’ in Washington, D.C."