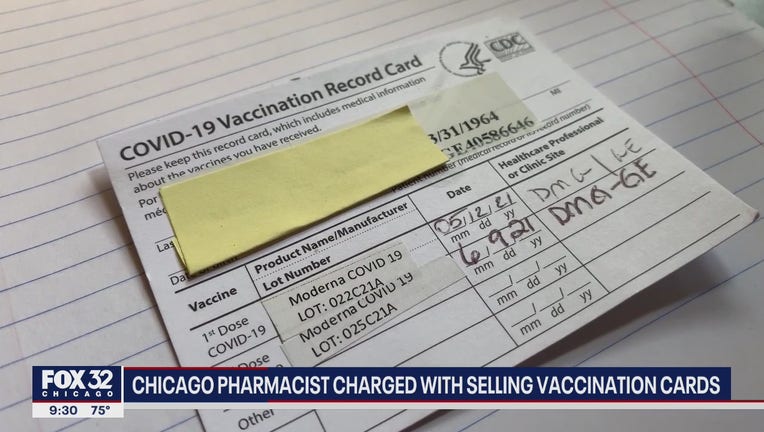 CHICAGO - A Chicago pharmacist has been charged with allegedly selling dozens of authentic COVID-19 vaccine cards on eBay.

Tangtang Zhao, 34, was arrested on Tuesday for selling 125 CDC vaccination cards for $10 each to 11 different buyers on the online bidding platform, according to the Department of Justice.

Zhao was a licensed pharmacist in Illinois and was an employee of Company 1, a pharmacy which distributes and administers COVID-19 vaccines nationwide. We found out his address is linked to a Walgreens in South Chicago.

In a statement to FOX 32, Walgreens says, "our pharmacies receive a limited number of CDC dose cards as part of the CDC immunization supply kits shipped to our locations that administer COVID-19 vaccines and we have procedures in place to prevent their misuse. The individual has not worked for us since late April and we continue to cooperate with the government’s investigation."

Special Agent Siobhan Johnson with the Federal Bureau of Investigation – Chicago says this was the first arrest of its kind in the Chicago area.

"Though now that we've had the first investigation go fully to prosecution, we hope to be seeing more prosecution in the future," Johnson said.

Company 1 is required to give a vaccination card to each vaccine recipient, and Zhao was able to obtain the cards through his employment with the pharmacy.

"Knowingly selling COVID vaccination cards to unvaccinated individuals puts millions of Americans at risk of serious injury or death," said Special Agent in Charge Emmerson Buie Jr. of the FBI’s Chicago Field Office. "To put such a small price on the safety of our nation is not only an insult to those who are doing their part in the fight to stop COVID-19, but a federal crime with serious consequences."

The FBI is warning people about the dangers of the fake COVID-19 vaccination cards and other coronavirus scams.

Zhao allegedly sold the cards in twelve separate transactions between March 25 and April 11, receiving more than $1,000 in total for the cards, according to an indictment.

He has been charged with 12 counts of theft of government property, according to the the Department of Justice. If convicted, Zhao faces up to 10 years in prison for each count.

The FBI says selling cards to those who skipped the shot puts millions of Americans at risk, but they expect to see this kind of COVID crime again.

"I think it would be fair to say that as the need for these cards seems to increase that the supply is going to increase to meet that demand. So unfortunately I do believe that we're going to see more fraudulent use of authentic cards, and additional use of fraudulent cards as well," Johnson said.

FAKE VACCINATION CARDS COULD WARRANT UP TO 5 YEARS IN PRISON

Zhao made his initial court appearance on Tuesday in the U.S. District Court for the Northern District of Illinois.

The FBI says anyone buying vaccination cards could face federal charges as well.