Martinsburg&nbsp;residents living within a half-mile radius of a treatment plant were evacuated after the accidental mixture of two chemicals on Monday morning.

MARTINSBURG, W.Va. (FOX 5DC) - Dozens of people evacuated for a gas exposure early Monday morning in Martinsburg were told by the evening that they cannot return until the next day.

Several residents living within a half-mile radius of a sewage treatment plant were evacuated after a mixture of two chemicals created a thick chlorine gas that permeated the downtown area.

Berkeley County’s Public Safety officials say a tanker offloading at the plant accidentally mixed Ferric Chloride and one other chemical.

Berkeley County spokesperson Chad Shifflett tells FOX 5 tanker was offloading into another tanker, which contained a different chemical inside. Shifflett said these are the chemicals used to refine and clean water. He also described the chlorine gas as strong enough to cause a burning sensation in the eyes. Some with respiratory issues had trouble breathing.

The incident occurred just before 6 a.m. Those evacuated told FOX 5 they woke to the sound of police and firefighters banging on their doors between 7 a.m. and 9 a.m. They were told they had about 10 minutes to pack up and leave, according to Felicia Baker.

Baker was one of the many parents waiting at the temporary shelter set-up at Orchard View Intermediate.

“It’s hard, especially with three young kids. It was definitely hard and my husband was at work so it was pretty much left up to me to try and get them up, get the dog out, with an officer standing at my door waiting for us to get out,” said Baker.

“You can smell it bad and the smoke, it was really bad. Really bad,” said Annette Robinson, who told FOX 5 her cousin suffered an asthma attack and needed assistance. Robinson said of Baker, “This young lady has been helping me and my grandkids since we’ve been here … we’re all just trying to be one big family now.” 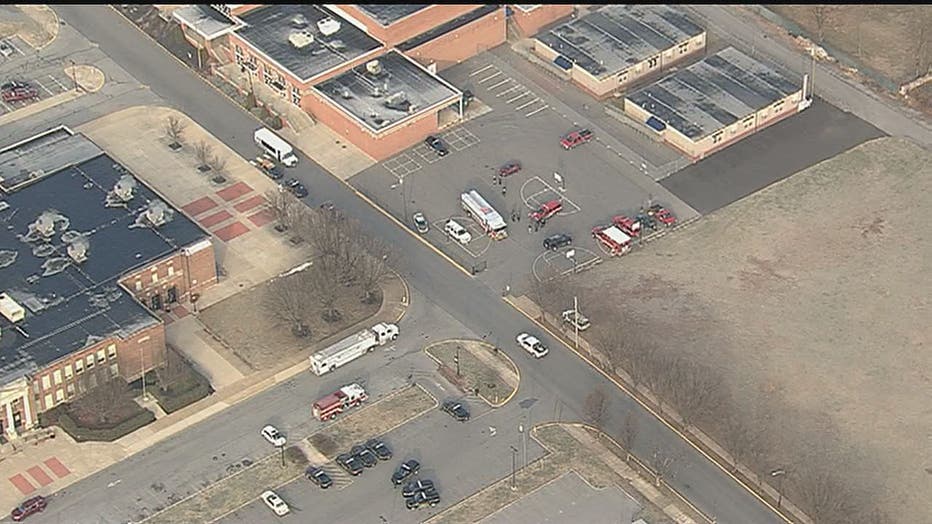 “I was impressed by how the first responders did what they needed to do. And they had very little time,” said Pat Bethany.

A Red Cross Disaster program manager told FOX 5 they were assisting around 150 throughout the day. Around 80 remained at the school after the announcement was made that the evacuation would last until the next morning.

Shifflett told FOX 5 the situation was contained. A chemical response team from Pennsylvania arrived at around 3 p.m. to assist Berkeley County and Martinsburg first responders with neutralizing the chemical reaction.

Some concerned residents tell FOX 5 they were unable to grab pets once the evacuation carried-out. Others were frustrated at the evacuation just days before Christmas.

County officials tweeted from the Berkeley County Public Safety Twitter account:  “Please be aware that the emissions from the Sewage Treatment Plant should only result in a mild respiratory irritation. You should not experience delayed or long term effects. However, in the event of nausea and vomiting, you should seek immediate medical attention.”