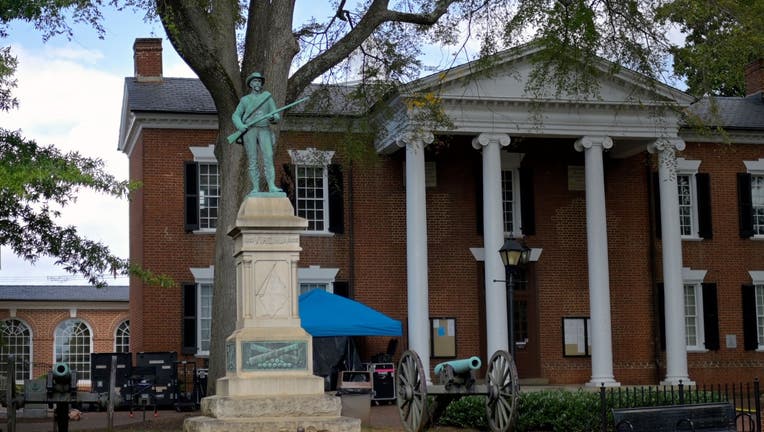 The confederate soldier statue at the Albemarle County Court House along with the canons will be removed Saturday morning September 12 in Charlottesville, VA on September 11, 2020. Photo by John McDonnell/The Washington Post via Getty Images)

CHARLOTTESVILLE, Va. - A crowd cheered Saturday as workers in Charlottesville removed a Confederate statue near the site of a violent white nationalist rally three years ago.

The removal of a bronze figure of a Confederate soldier known as “At Ready” is seen in Charlottesville as a milestone in eliminating divisive symbols of the Civil War.

The Washington Post reports that the process of removing the statue began Saturday morning as workers affixed straps to the 900-pound statute to prepare to remove it from its base.

A crowd of about 100 people cheered behind metal barricades as the figure was lifted from its pedestal and lowered to the ground. The statue has been outside the Albermarle County courthouse for 111 years.

Members of the crowd all wore masks amid the coronavirus pandemic. Some wore blue Union Civil War caps and danced to music broadcast by a local radio station.

The cheerful scene was in stark contrast to the violence at the Unite The Right rally on Aug. 12, 2017. One woman was killed and dozens were injured when a self-avowed white supremacist drove his car into a crowd of people protesting the white nationalist gathering.

“This is a magnificent moment,” said local community organizer Don Gathers. “Much of the racial tension, strife and protest we’re seeing across the country emanates from right here in Charlottesville. But now we’re moving the needle in a positive way.”

Albemarle County supervisors voted earlier this summer to take down the statute, which is located within the city of Charlottesville. The statue was not the focal point of the 2017 rally, but it is a block away from the statue of Confederate Gen. Robert E. Lee that white supremacist and neo-Nazi groups said they were defending in the clash.

Charlottesville’s city council has voted to remove both Lee and a nearby monument to fellow Gen. Thomas J. “Stonewall” Jackson, but a small group of Confederate supporters filed a lawsuit to save them. The case is headed to the Supreme Court of Virginia and could take months to be resolved.