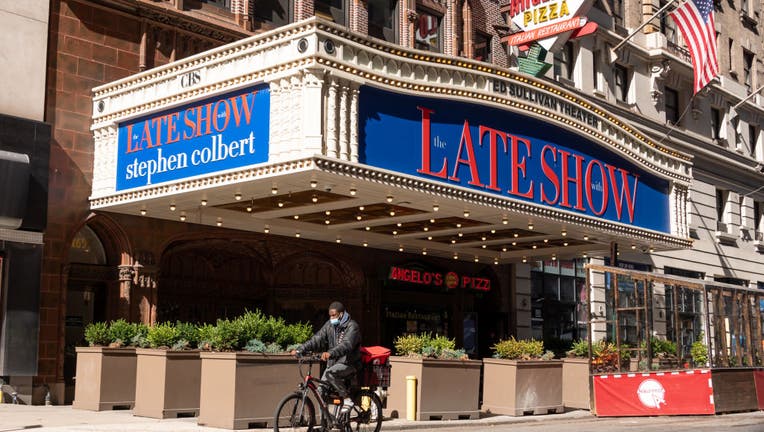 WASHINGTON - The "Colbert 9" were cleared of "unlawful entry" charges Monday after staffers for "The Late Show with Stephen Colbert" were caught recording comedy skits inside a House Office Building after hours without permission in June.

A statement from the U.S. Attorney’s office read: "After a comprehensive review of all of the evidence and the relevant legal authority, the U.S. Attorney’s Office for the District of Columbia has determined that it cannot move forward with misdemeanor charges of unlawful entry against the nine individuals who were arrested on June 16, 2022 at the Longworth Office Building. The individuals, who entered the building on two separate occasions, were invited by Congressional staffers to enter the building in each instance and were never asked to leave by the staffers who invited them, though, members of the group had been told at various points by the U.S. Capitol Police that they were supposed to have an escort. The Office would be required to prove beyond a reasonable doubt that these invited guests were guilty of the crime of unlawful entry because their escort chose to leave them unattended. We do not believe it is probable that the Office would be able to obtain and sustain convictions on these charges. The defendants no longer will be required to appear for a scheduled hearing in the Superior Court of the District of Columbia on July 20, 2022."

The United States Capitol Police (USCP) released a statement saying they "respect the decision that office has made" and referred any questions about the decision to the U.S. Attorney’s Office for the District of Columbia.

Fox News is told the Capitol Police are upset about the decision to drop the charges, especially since the Colbert 9 were told on multiple occasions they weren’t supposed to be there. Sources close to the Capitol Police also tell Fox this undercuts law enforcement as they try to secure the Capitol complex after the riot.

In June, a group of nine staffers from CBS’ "The Late Show with Stephen Colbert" were arrested after illegally entering a U.S. House of Representatives building. Among those arrested was Robert Smigel, the puppeteer for "Triumph the Insult Comic Dog," a character on Colbert's show, along with writer Josh Comers, associate producer Allison Martinez and senior producer Jake Plunkett.

Fox News was told that the Colbert 9 tried to get permission to cover the Jan. 6 committee hearings but were denied by the House/Senate Radio TV Galleries because they are considered to be entertainment and not news.

According to the police, the staffers were charged with unlawful entry after being found acting "disruptive, loud" and "theatrical" near the office of Rep. Lauren Boebert, R-Colo., in the Longworth House Office Building as they recorded comedy skits for the Late Show around 8:30 p.m. on June 16.

Earlier in the day, the group had conducted interviews with members of the Jan. 6 Select Committee, Reps. Adam Schiff, D-Calif., and Stephanie Murphy, D-Fla, as well as Rep. Jake Auchincloss, D-Mass.

They were eventually escorted out of the Cannon House Office Building, where the Jan. 6 committee was conducting its hearing, because they didn't have proper press credentials. Sources tell Fox News that an aide to Auchincloss let them back into the House office buildings around 4:00 p.m. and they were left unattended for several hours.

Colbert himself downplayed the arrests on his show the following Monday as a "very professional" interaction between his staff and "cautious" Capitol Police officers and jokingly called the incident "first-degree puppetry."

Republican lawmakers also requested information that Monday on how Colbert’s crew were able to gain access inside the building despite not having press credentials. Despite the arrests, a CBS spokesperson at the time told Fox News that "interviews at the Capitol were authorized and pre-arranged through Congressional aides of the members interviewed."

Fox is told that the "Colbert 9" has been cleared of "unlawful entry" charges after they were caught recording comedy skits inside a House Office Building after hours without permission in June.
Persons who don’t work on Capitol Hill are not allowed to be inside official buildings after hours unless they have an escort. Others must have a proper pass.

Fox is told that the Colbert 9 tried to get permission to cover the 1/6 committee hearings but were denied by the House/Senate Radio TV Galleries. That’s because they are considered to be entertainment and not news.

Regardless, the team had interviews scheduled with Reps. Adam Schiff (D-CA), Stephanie Murphy (D-FL) and Jake Auchincloss (D-MA). They were allowed to come to the complex for those interviews because they had an official appointment.

But after the interviews, USCP officers found the Colbert 9 wandering around the area in the Cannon House Office Building where the 1/6 committee was conducting a hearing that day. The House Radio-TV Gallery as well as Capitol Police required just not a press pass to cover the hearings but a special overlay for that area. That’s because of the high interest in the hearings by the press corps.
Capitol Police escorted the Colbert 9 out of the building because they had been denied a credential and were still trying to cover the hearing.

Then, after 4 p.m. ET an aide to Auchincloss let the Colbert 9 back into the Capitol complex. Fox is told the aide thought they had other interviews to do.

But later that night, around 8:30 pm ET, the same Capitol Police officers who asked them to leave earlier in the day found the Colbert 9 in the Longworth House Office Building. Fox is told they being loud and shooting skits outside the office of Rep. Lauren Boebert (R-CO). Fox is told they also performed skits near the office of House Minority Leader Kevin McCarthy (R-CA) and Rep. Jim Jordan (R-OH).

Capitol Police arrested the nine and charged them with unlawful entry. They spent part of the night in jail before being released early the next morning. They were slated to have a court appearance on Wednesday.

Among those arrested: Robert Smigel.

Smigel is the voice of Triumph the Insult Comic Dog. Smigel is also known for animated TV Funhouse skits on Saturday Night Live.

Fox is told the Capitol Police are upset about the decision to drop the charges. Especially since the Colbert 9 were told on multiple occasions they weren’t supposed to be there

Sources close to the Capitol Police tell Fox this undercuts law enforcement as they try to secure the Capitol complex after the riot.