Brian Laundrie's parents claim no knowledge of his whereabouts

NORTH PORT, Fla. - The parents of Brian Laundrie, the only person of interest named in the disappearance of Gabby Petito, say they do not know where their son is.

The lawyer for Chris and Roberta Laundrie released a statement Monday, possibly in an effort to quell claims they may know where he went.

Attorney Steven Bertolino said in the statement "Chris and Roberta Laundrie do not know where Brian is. They are concerned about Brian and hope the FBI can locate him. The speculation by the public and some in the press that the parents assisted Brian in leaving the family home or in avoiding arrest on a warrant that was issued after Brian had already been missing for several days is just wrong."

Meanwhile, the lawyer representing Gabby Petito's family, Richard Stafford, announced Monday he will hold a press conference at 1 p.m. Tuesday at his office in New York. No further details were provided.

Brian Laundrie and his fiancé, Gabby, went on a cross-country trip in Gabby's Ford Transit van back in late June.

In mid-August, the two had a run-in with police officers in Moab, Utah, after the couple got into a physical altercation outside of the Moonflower Market. 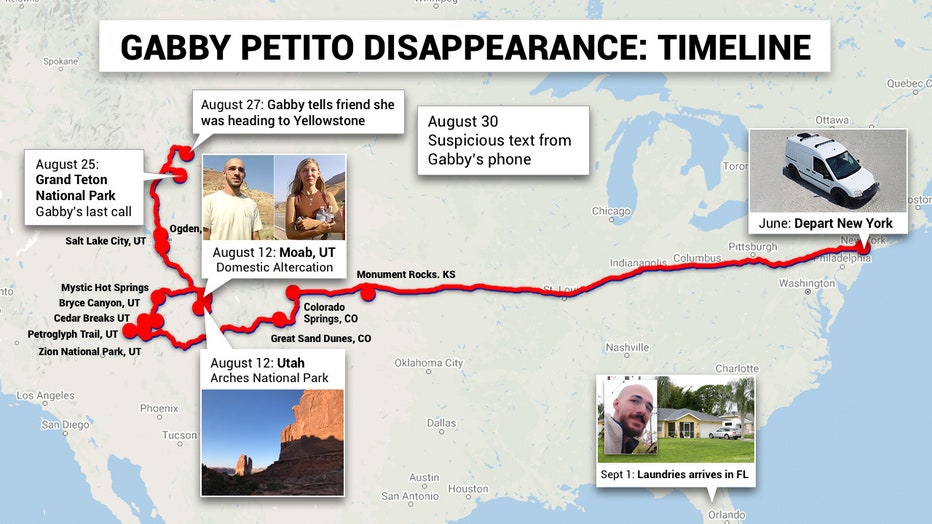 Gabby's mother says the last time she's sure she spoke to her daughter was August 25, when Gabby told her mother she and Brian were headed to Grand Teton National Park.

"I don't know if she left Grand Teton or not," Nicole Schmidt later told FOX News.

However, on Aug. 27, Schmidt said she got a text message from Gabby's phone, but she is not convinced the message was from her daughter.

Florida cattle rancher Alan McEwen has spent nearly every day of the last 30 years navigating the woods where Brian Laundrie is suspected of hiding and says it is not conducive to habitation.

Then, on September 1, Brian Laundrie arrived back at his parents' house in North Port, Florida, driving Gabby's van, but Gabby was nowhere to be found.

Gabby was reported missing by her parents Saturday, Sept. 11. Her remains were later discovered in Grand Teton National Park. 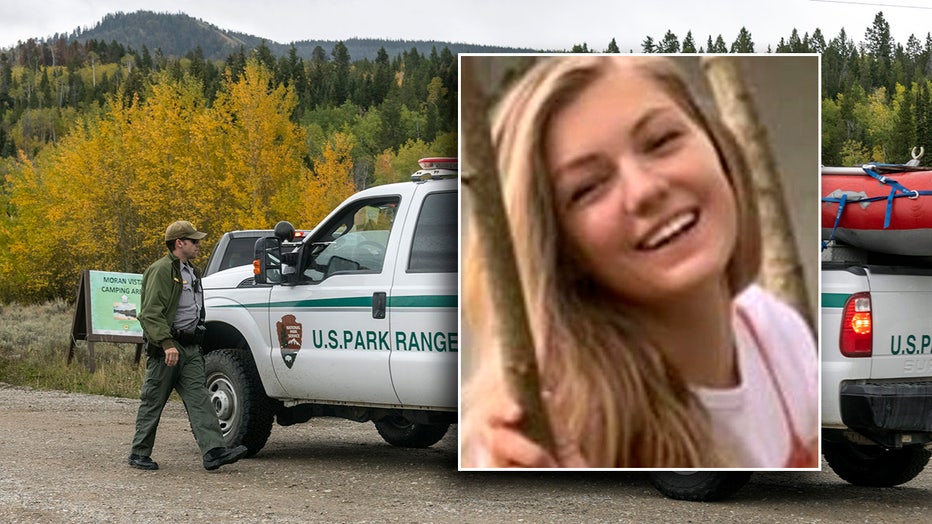 Park ranger near Spread Creek Campground on September 19, 2021, near where Gabby Petito remains were found (Photo by Natalie Behring/Getty Images)

On Tuesday, September 14, Brian left his parents' home, driving his silver Ford Mustang and carrying a backpack, to go camping near the Carlton Reserve, according to his parents. Brian's car was brought back to the Laundrie's home from the reserve that Thursday, His parents reported him missing Friday, Sept. 17.

Who are Brian Laundrie's parents?

The Laundries own Juicer Services, a company started in 2017 that sells and services commercial juicing equipment. The couple runs the company out of their home.

Brian Laundrie and Petito moved in with his parents in 2019; the following year, they got engaged. The couple both worked at a Publix supermarket prior to their road trip.

As the search for Brian Laundrie, and answers in the death of Gabby Petito, continue, so too does the scrutiny of his parents, Christopher and Roberta Laundrie.

After a body matching Petito's description was found in Wyoming, Christopher and Roberta Laundrie issued a statement through their lawyer, Steven Bertolino: "The news about Gabby Petito is heartbreaking. The Laundrie family prays for Gabby and her family."

The couple has otherwise largely remained quiet, avoiding questions whenever they made a brief appearance outside their home. 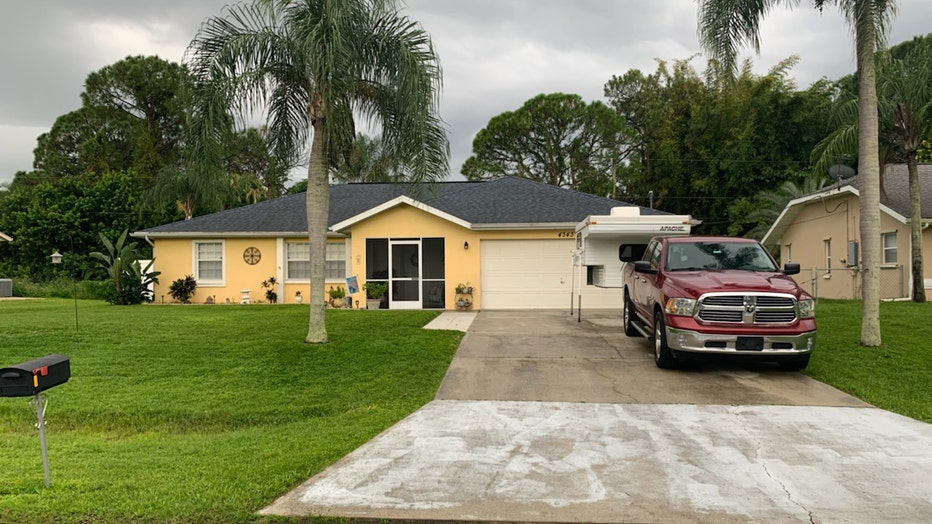 Members of the North Port community, and beyond, are asking if they had any role in his disappearance and could they themselves face charges? It’s unclear what, if anything, Brian Laundrie's parents know.

Criminal defense attorney Bjorn Brunvand, who is not associated with the case, says their silence doesn't necessarily mean they had any role to play in their son's disappearance or that they know anything about Gabby’s death or Brian's disappearance. The answer to the Laundries’ silence may be simple, Brunvand says.

"They may just be following legal advice."

The search for Brian Laundrie

On the evening of Friday, Sept. 17, police speak with the Laundrie family "at their request," but still not with Brian. The police presence prompted a crowd of protesters to gather outside the home, holding signs and chanting.

Immediately after Brian was reported missing, a search of the 25,000-acre reserve began, involving agencies from the North Port Police Department to the FBI.

It's been nine days since Brian Laundrie was last seen. The FBI is still looking for clues tonight to try to figure out where he is. FOX 13's Justin Matthews reports.

UPDATES: FBI officially takes the lead in search for Brian Laundrie after police scale back efforts in Carlton Reserve

Meanwhile, investigators continued to try to develop leads in the case and Brian's whereabouts.

On Sept. 20, FBI agents hauled carloads of evidence from the Laundrie home as the search at Carlton Reserve expanded to include dogs, airboats, ATVs, and aircraft from multiple agencies.

During the search's fifth day, the FBI issued an arrest warrant for Laundrie for charges "related to Mr. Laundrie’s activities following the death of Gabrielle Petito," specifically his "unauthorized" use of a debit card in the wake of Petito’s death. A North Port law firm also announced a $20,000 reward for information leading to Laundrie's location. 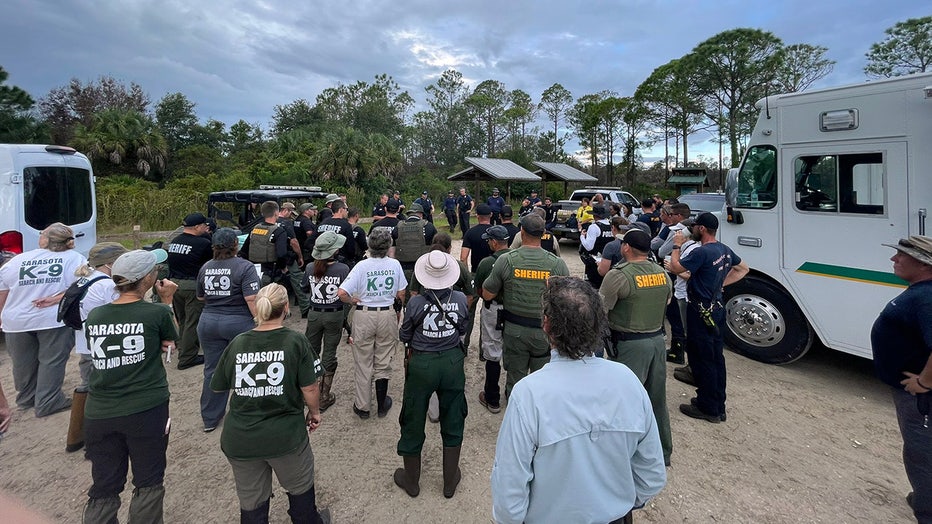 After several days of little to no news about progress in the search for Laundrie, FBI agents came to the Laundrie home Sept. 26 to collect DNA for the purpose of "matching," the Laundrie family lawyer said. It was not clear what, if any, samples the FBI had to match DNA to.

The following day, Monday, Sept. 27 – 10 days after Laundrie was first reported missing by his parents – there had still been no credible sighting or sign of him.

Anyone with information regarding Petito’s disappearance is asked to call the FBI national hotline at 1-800-225-5324 or submit tips to tips.fbi.gov.