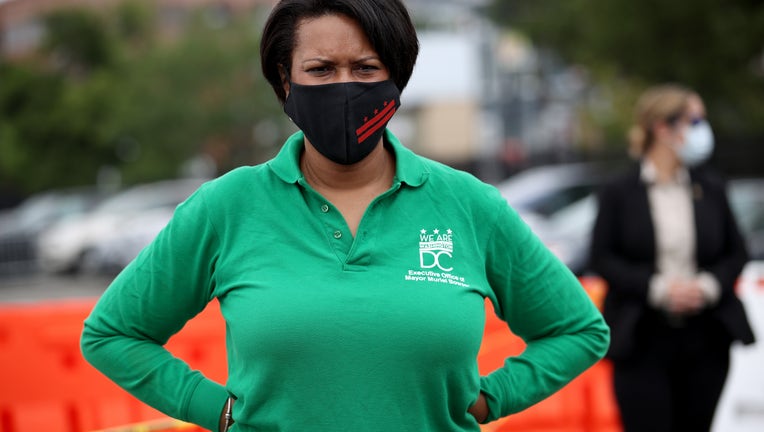 WASHINGTON, DC - JUNE 10: Washington DC Mayor Muriel Bowser visits a coronavirus testing site in the Anacostia neighborhood June 10, 2020 in Washington, DC. Earlier in the day Bowser held a press conference to give updates on the response to COVID-19

WASHINGTON - Mayor Muriel Bowser has publicized her request for more federal assistance during Joe Biden's inauguration Jan. 20, in hopes that the next wave of right-wing gatherings in the nation's capital won't be as destructive as the one Wednesday.

Bowser on Sunday tweeted her letter requesting assistance from the Department of Homeland Security.

It asks for, among other things, a coordinated law enforcement plan among federal authorities, a cancelation of protest permits around the inauguration and a "pre-disaster declaration" expediting FEMA funding:

Viral videos on social media appear to show some Capitol police officers letting right-wing activists into the Capitol, and in some instances taking photos with them.

Bowser said she requested assistance from the National Guard days in advance of the Jan. 6 rally, but National Guardsmen didn't arrive to the Capitol until hours after rioters already stormed the building.

Others wondered why other preventative measures like fencing, which were installed around the White House during the height of the Black Lives Matter protests this summer, weren't installed ahead of the heavily publicized Jan. 6 right-wing rally.

Five people died as a result of the security breach. A sixth, Capitol Police Officer Howard Liebengood, took his life Saturday after responding to the insurrection.

D.C. demonstrations including a "Million Militia March" are now planned as soon as next weekend in opposition to Biden's inauguration.

Some District residents are urging short-term rental landlords to keep their properties vacant around the inauguration in an attempt to limit the number of disruptive out-of-towners coming to the nation's capital.

The victims of the Capitol riot include Capitol Police Officer Brian Sicknick. Unarmed Trump supporter Ashli Babbitt died after being shot by police.

55-year-old Kevin Greeson of Alabama died of a heart attack during the riot. 50-year-old Benjamin Phillips of Pennsylvania died after suffering from a stroke.

34-year-old Rosanne Boyland collapsed and died due to an undisclosed medical emergency.

#DontRentDC trends as District residents brace for another insurrection