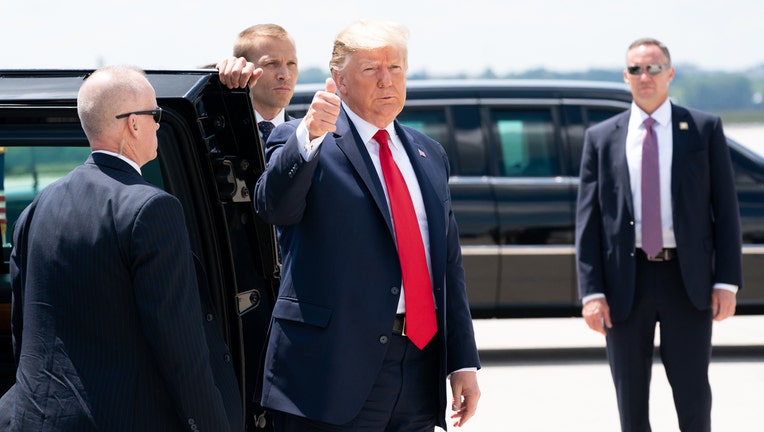 Two Democratic presidential primary candidates criticized President Trump on Sunday for retweeting a conspiracy theory that the Clintons had a role in the death of disgraced financier Jeffrey Epstein.

Both Sen. Cory Booker of New Jersey and former Texas Rep. Beto O’Rourke said that Trump is trying to divide Americans and distract voters away from the issue of gun violence by fueling the conspiracy theory that Epstein did not commit suicide, but instead was killed by someone connected to former President Bill Clinton and former Secretary of State Hillary Clinton.

“What he’s doing is dangerous, he’s giving light to conspiracy theorists and whipping people up to anger against different people in this country,” Booker said during an interview on CNN’s “State of the Union.” “He is using the same tactics as the Russians to attack our democracy.”

O’Rourke added during a separate interview on the Sunday morning talk show that the president’s retweet is ‘[a]nother example of Trump using his position to attack political enemies with unfounded conspiracy theories.”

“Trump is changing the conversations so we can’t focus on the real problems that he is part of,” O’Rourke added, singling out gun violence and anti-immigrant sentiments as two issues Trump is fueling through his rhetoric.

“Died of SUICIDE on 24/7 SUICIDE WATCH?” Williams wrote. “Yeah right! How does that happen #JefferyEpstein had information on Bill Clinton & now he’s dead.”

Epstein, 66, had been denied bail and faced up to 45 years behind bars on federal sex trafficking and conspiracy charges unsealed last month. He had pleaded not guilty and was awaiting trial next year, but was not on suicide watch, officials confirmed.

Williams also claims in a video along with the tweet that for Epstein to die by suicide, "somebody not doing their job, or somebody got paid not to do — not to do their job, so somebody can get knocked off, so information don’t come out.”

Epstein’s relationships with Trump, former President Bill Clinton and Britain's Prince Andrew are at the center of online rumors and theories, with many questioning what politicians knew about Epstein's alleged sex crimes.

Epstein was found unresponsive in his cell Saturday morning at the Metropolitan Correctional Center, according to the Federal Bureau of Prisons. Fire officials received a call at 6:39 a.m. Saturday that Epstein was in cardiac arrest, and he was pronounced dead at New York Presbyterian-Lower Manhattan Hospital.

The federal investigation into the allegations remains steadfast, U.S. Attorney Geoffrey Berman said. He noted in a statement Saturday that the indictment against Epstein includes a conspiracy charge, suggesting others could face charges in the case.