President Joe Biden set to deliver his prime-time presidential address about the "soul of the nation" at 8 p.m. ET Thursday in Philadelphia. He's expected to discuss his administration's biggest successes so far, ongoing threats to American democracy and what's at stake in the November midterm elections.

WASHINGTON - President Joe Biden charged in a prime-time address Thursday that the "extreme ideology" of Donald Trump and his adherents "threatens the very foundation of our republic," as he summoned Americans of all stripes to help counter what he sketched as dark forces within the Republican Party trying to subvert democracy.

In his speech at Philadelphia’s Independence Hall, Biden unleashed the trappings of the presidency in an unusually strong and sweeping indictment of Trump and what he said has become the dominant strain of the opposition party. His broadside came barely two months before Americans head to the polls in bitterly contested midterm elections that Biden calls a crossroads for the nation.

"Too much of what’s happening in our country today is not normal," he said before an audience of hundreds, raising his voice over pro-Trump hecklers outside the building where the nation’s founding was debated. He said he wasn’t condemning the 74 million people who voted for Trump in 2020, but added, "There’s no question that the Republican Party today is dominated by Donald Trump and the MAGA Republicans," using the acronym for Trump’s "Make America Great Again" campaign slogan.

The explicit effort by Biden to marginalize Trump and his followers marks a sharp recent turn for the president, who preached his desire to bring about national unity in his Inaugural address.

Biden, who largely avoided even referring to "the former guy" by name during his first year in office, has grown increasingly vocal in calling out Trump personally. Now, emboldened by his party’s summertime legislative wins and wary of Trump’s return to the headlines, he has sharpened his attacks, last week likening the "MAGA philosophy" to "semi-fascism." 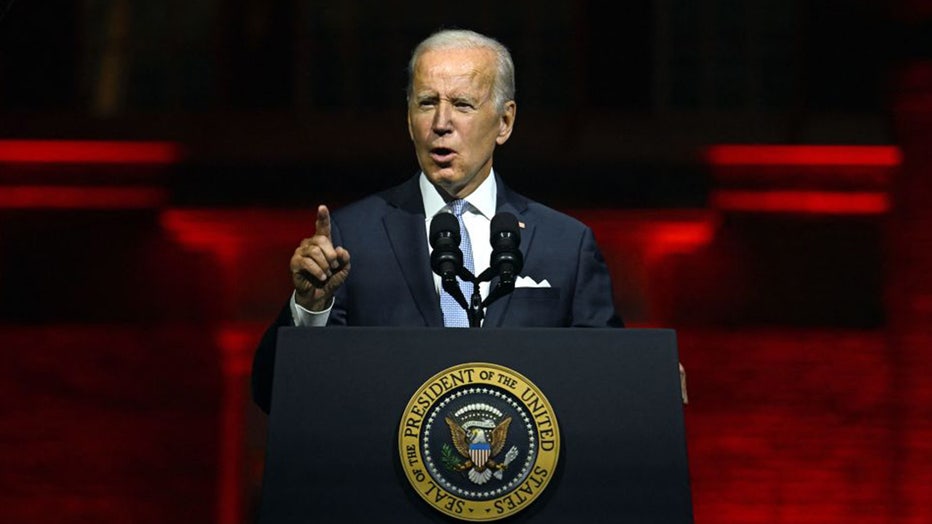 FILE - US President Joe Biden speaks about the soul of the nation, outside of Independence National Historical Park in Philadelphia, Penn.

Wading into risky political terrain, Biden strained to balance his criticism with an appeal to more traditional Republicans to make their voices heard. Meanwhile, GOP leaders swiftly accused him of only furthering political divisions.

Asked about McCarthy’s criticism, White House press secretary Karine Jean-Pierre said earlier Thursday that "we understand we hit a nerve" with the GOP leader, and quoted the Republican’s prior statements saying Trump bore responsibility for the Jan. 6, 2021, attack on the U.S. Capitol.

Trump plans a rally this weekend in Scranton, Biden’s birthplace

"Equality and democracy are under assault" in the U.S., Biden charged, casting Trump and his backers in the GOP as a menace to the nation’s system of government, its standing abroad and its citizens’ way of life.

Trump and the MAGA Republicans "promote authoritarian leaders and they fan the flames of political violence," he said. They "are determined to take this country backwards." 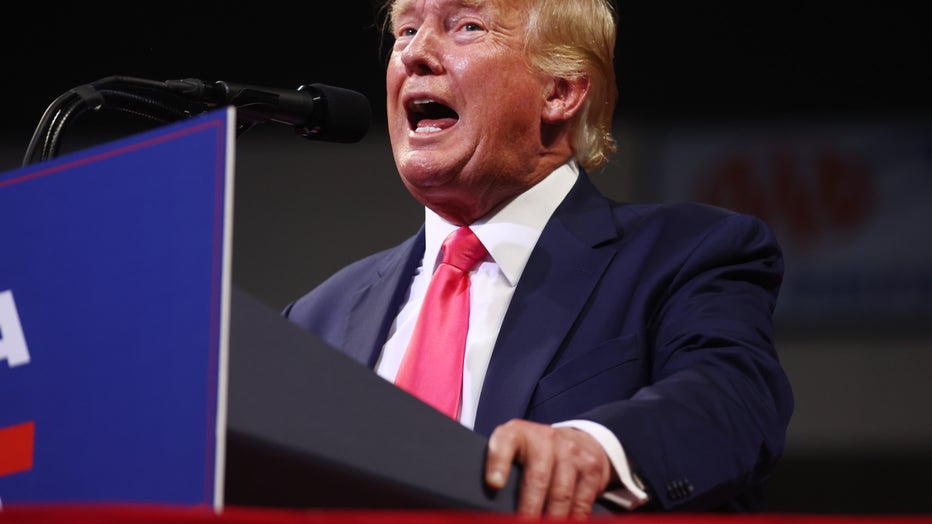 "Backwards to an America where there is no right to choose, no right to privacy, no right to contraception, no right to marry who you love," he said, referencing the social issues that Democrats have looked to place front-and-center for voters this fall.

Biden’s appearance was promoted as an official, taxpayer-funded event, a mark of how the president views defeating the Trump agenda as a policy aim as much as a political one. Red and blue lights illuminated the brick of Independence Hall, as the Marine Band played "Hail to the Chief" and a pair of Marine sentries stood at parade rest in the backdrop. Still, the major broadcast television networks did not carry the address live.

The president appealed for citizens to "vote, vote, vote" to protect their democracy. "For a long time, we’ve reassured ourselves that American democracy is guaranteed. But it is not."

Biden harked back to the 2017 white supremacist protest in Charlottesville, Virginia, which he said brought him out of political retirement to challenge Trump. Biden argued that the country faces a similar crossroads in the coming months, and he cast defending the "soul of the nation" as "the work of my presidency — a mission I believe in with my whole soul."

But Iowa GOP chair Jeff Kaufman said in a statement that Biden was using the tactics of an authoritarian regime, "trying to turn his political opponents into an enemy of the state."

Larry Diamond, an expert on democracy and senior fellow at the Hoover Institution at Stanford University, said calling Trump out for attacks on democracy "can be manipulated or framed as being partisan. And if you don’t call it out, you are shrinking from an important challenge in the defense of democracy."

The White House has tried to keep Biden removed from the legal and political maelstrom surrounding the Department of Justice’s discovery of classified documents in Trump's Florida home. Still, Biden has pointed to some Republicans’ quick condemnation of federal law enforcement, to argue "you can't be pro-insurrectionist and pro-American."

His trip to Philadelphia was just one of his three to the state within a week, a sign of Pennsylvania's importance in the midterms, with competitive Senate and governor's races. However, neither Lt. Gov. John Fetterman, the Democrats' Senate nominee, nor Attorney General Josh Shapiro, their pick for governor, attended Thursday night.

The White House intended the speech to unite familiar themes: holding out bipartisan legislative wins on guns and infrastructure as evidence that democracies "can deliver," pushing back on GOP policies on guns and abortion that Biden says are out of step with most people's views.

The challenges have only increased since the tumult surrounding the 2020 election and the Capitol attack.

Lies surrounding that presidential race have triggered harassment and death threats against state and local election officials and new restrictions on mail voting in Republican-dominated states. County election officials have faced pressure to ban the use of voting equipment, efforts generated by conspiracy theories that voting machines were somehow manipulated to steal the election.

Candidates who dispute Trump’s loss have been inspired to run for state and local election posts, promising to restore integrity to a system that has been undermined by false claims.

There is no evidence of any widespread fraud or manipulation of voting machines. Judges, including ones appointed by Trump, dismissed dozens of lawsuits filed after the election, and Trump’s own attorney general called the claims bogus. Yet Associated Press-NORC Center for Public Affairs Research polling has shown about two-thirds of Republicans say they do not think Biden was legitimately elected president.