One of the victims in an armed carjacking that took place at the St. Elmo garage in Bethesda this past summer described to FOX 5 the trauma she went through – and still experiences.

MONTGOMERY COUNTY, Md. - One of the victims in an armed carjacking that took place at the St. Elmo garage in Bethesda this past summer, described to FOX 5 the trauma she went through – and still experiences.

The victim asked not to be identified.

"It just – it’s completely shaken my family," the victim explained. "I was terrified to let my kids go to the mall or out with friends in public. I just worried about them all the time. I had nightmares every day for at least a week. I think my husband and I went out, I don’t know a week or two later – we went out in D.C. and I was completely freaked out. I was very much on edge, you know, someone would walk in, and I’m like O-M-G do they have a gun? And I still sometimes have that feeling."

Our interview with the woman was conducted a day after one of FOX 5’s own producers became the victim of an armed carjacking early Thursday morning. That incident also took place in Downtown Bethesda.

Police have since released new suspect vehicle images in that case.

In the St. Elmo garage case, authorities recently announced that 19-year-old Herbert Randall, who was 18 at the time of the crime, was sentenced to nine years behind bars.

"I think it’s very important that we send a message to all people in the community, including younger people, that acts of violence, particularly arming yourself and stealing a car, there’s going to be a serious consequence and there should be potentially a level of incarceration in all of these cases," said Montgomery County States Attorney John McCarthy.

FOX 5 also asked the county’s top prosecutor about juveniles being charged. They can be charged as adults. However, many people, including the St. Elmo garage victim, feel those kept in the juvenile system for more serious crimes get off too easily.

RELATED: 19-year-old sentenced to 9 years in prison for armed carjacking in Bethesda

Asked if there should be greater punishments for juveniles, McCarthy noted how it’s the state – and not the county – that handles the juvenile system. McCarthy feels the state legislature is focusing too much on age. The Maryland Department of Juvenile Services rehabilitation programs, McCarthy says, are only set up to last about a year, regardless of whether they have custody of a juvenile until that individual turns 21. 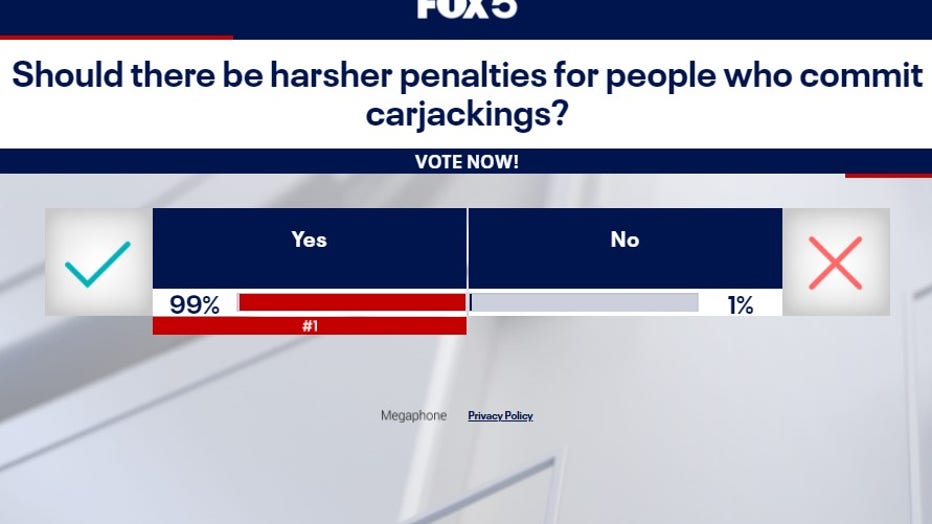 "It should be at the services and the program level and what we’re doing with these kids, not at setting up guidelines that make it so that all we do is dump more kids into a system that has inadequate resources, inadequate programs, that already has a failing report card," McCarthy said. "That doesn’t make sense to me."

The St. Elmo garage carjacking victim says something we can all do to help police is to put tile trackers or other GPS tracking devices in our vehicles. She also hopes the county will install more cameras and lights in public garages. The victim says it’s not worth your life — give up the keys.

In the District, penalty changes for violent crimes in the Revised Criminal Code Act (RCCA), which was recently passed by the D.C. Council, were vetoed by the mayor this week. Officials have argued in the past, that some of the changes remove a tool prosecutors and judges can use. FOX 5's Stephanie Ramirez goes one-on-one with Councilmember Charles Allen.

In the District, penalty changes for violent crimes in the Revised Criminal Code Act (RCCA), which was recently passed by the D.C. Council, were vetoed by the mayor this week.

Officials have argued in the past, some of the changes remove a tool prosecutors and judges can use. D.C. Mayor Muriel Bowser spoke on how she feels the bill sends the wrong message in the midst of the crime the District is facing.

"I think everybody agrees that we have to update our code. It hasn’t been updated in some time – I think 100 years – and a complete and total overhaul," Mayor Bowser said on FOX 5. "We support most of it, but we don’t think that it should include policies where there isn’t consensus agreement.

The former Judiciary and Public Safety Committee chair, who worked closely on the major criminal code overhaul, responded to the mayor and public criticisms in an interview with FOX 5 on Friday. Councilmember Charles Allen said the RCCA doesn’t address the juvenile side.

"It doesn’t lessen the penalty," Allen said. "It lines up with what the court’s handing out. And again, I don’t think many people would think 24 years in prison is anything light. What people are looking at is that on D.C.’s Criminal Code, many, many years ago, there was something added that added the possible maximum up to 40 years in prison in carjackings. That’s not something that courts ever hand out."

"I think we know, though, that the biggest way we make an impact is you have swift and certain consequences," he added. "In some cases, extremely long sentences don’t have the deterrent effect that some might want it to have. What makes the difference is the certainty of being caught."

Law enforcement leaders have spoken in the past about how they see youth offenders arrested and released too quickly, only to re-offend.

D.C. police created a Carjacking Task Force in 2021, working with Maryland law enforcement partners to address an issue they saw explode during the pandemic. The department also keeps a database dedicated to carjacking stats.

Prosecutors from Maryland and DC recently formed an alliance to combat the cross-border problem of surging carjackings.

In a statement to FOX 5, Pinto said: "Motor vehicle theft continues to be a major concern for D.C. residents and for me. D.C. currently has strict penalties for carjacking and under the Revised Criminal Code – which will be implemented in 2025 -- will continue to allow judges to impose penalties as high as 18 years for first-degree carjacking. Penalties for traumatic crimes are one important component of our justice system; however, penalties alone do not serve as a meaningful deterrent. We must continue to intervene in our communities earlier to provide young people with appropriate supports, tools, and opportunities. But, when someone does commit a crime, we must ensure they understand the consequences to their actions, are held accountable, receive the services they need to rehabilitate, and access support to prevent crime in the future."