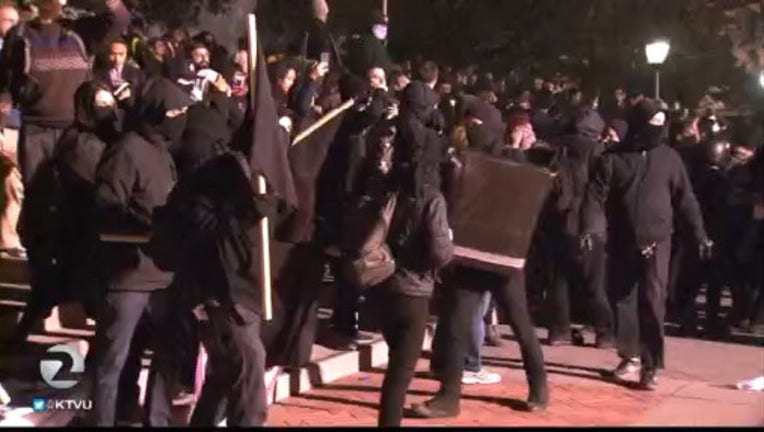 BERKELEY, Calif. (AP) -- The chaos at the University of California, Berkeley, was shocking: Protesters set fires, smashed windows, hurled explosives at police and ultimately achieved their goal of canceling an appearance by right-wing provocateur Milo Yiannopoulos.

The scene gained worldwide attention not just because of the mayhem but because of where it took place. UC Berkeley is the birthplace of the free-speech movement and has been known for more than a half-century as a bastion of tolerance.

As the university cleaned up Thursday, it struggled with questions about why the violence spun out of control and what has happened to the open-minded Berkeley of the 1960s.

"It was not a proud night for this campus," school spokesman Dan Moguluf said, later adding, "We are proud of our history and legacy as the home of the free speech movement."

Officials knew there was a potential for violence and went to "extraordinary lengths" to prepare for the event, Mogulof said in a statement. But school authorities say they believe the instigators were not Berkeley students.

Berkeley was the last stop on Yiannopoulus' college tour, which had sparked protests and sporadic violence around the country. He is a vocal supporter of President Donald Trump and a self-proclaimed internet troll whose comments have been criticized as racist, misogynist and anti-Muslim.

Dozens of police were called to Berkeley from nine UC campuses. The student union where the talk was scheduled was locked down hours before the event. Layers of metal barricades were erected around the building with riot police standing guard inside.

But Mogulof said what transpired Wednesday night was unprecedented.

The protests started peacefully around 4 p.m. As night fell, the crowd swelled to more than 1,500, police estimated, and "more than 100 armed individuals clad in ninja-like uniforms who utilized paramilitary tactics" infiltrated the crowd and began hurling commercial grade fireworks, Molotov cocktails, rocks and other objects at police, Mogulof said.

They toppled the metal barricades and used them to bash windows of the student union and then set fire to a kerosene generator, sparking a blaze that burned for over an hour.

Later that night, after the crowds dispersed, a small group took the chaos off campus and into the nearby city streets of Berkeley.

Amid the cleanup, a 21-year-old student who supports Trump was brazenly attacked on campus. The student, Jack Palkovic, was wearing a "Make America Great Again" cap as he headed to class when a white SUV slammed to a halt, and two students jumped out and pummeled him. Police arrived and arrested both men.

Many students shook their heads at the violence and what it means at a place like Berkeley.

Freshman Grace Schnetzler, 18, said she worked hard in high school to attend Berkeley and was upset outside demonstrators were diminishing the campus' reputation for free speech and tolerance.

"On the other hand, I don't know why he picked Berkeley," Schnetler said about Yiannopoulos. "What kind of reception did he expect?"

The unrest sparked a debate Thursday on the floor of the state Senate, where Republicans bemoaned what they characterized as a campus culture that devalues free speech.

"Universities should be the most open, the most welcoming harbor of all ideas, left or right," Republican state Sen. Ted Gaines said. "But they have turned into rigid ideological prisons where stepping outside the latest progressive liberal path is considered a thought crime."

The comment was echoed in a tweet by Trump who questioned whether Berkeley should be granted federal funding: "If U.C. Berkeley does not allow free speech and practices violence on innocent people with a different point of view -- NO FEDERAL FUNDS?"

Democrats condemned Trump's tweet, saying administrators worked hard to facilitate the speech and only canceled it once the security became untenable.

"Today, it's academic freedom," Democratic state Sen. Scott Wiener said. "Tomorrow, Lord knows what it's going to be, and it has to stop."