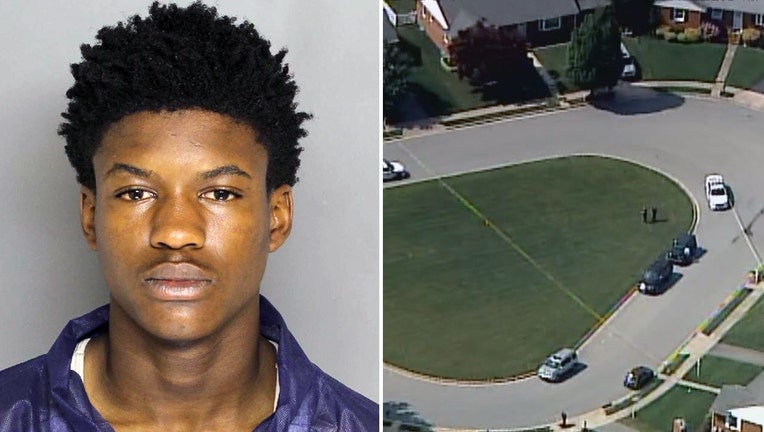 BALTIMORE (AP) — - A Baltimore teenager was convicted of felony murder Wednesday, about a year after he accelerated a stolen Jeep and hit a Maryland police officer, killing her on a suburban cul-de-sac.

Dawnta Harris, who's 17 but was tried as an adult, faces life in prison for the slaying of Baltimore County police officer Amy Caprio. The jury in the suburban county ringing the city of Baltimore handed down the verdict after deliberating for nearly seven hours over two days.

Last week, jurors watched Caprio's searing body-worn camera footage. She could be heard repeatedly ordering Harris out of the car before the 29-year-old law enforcer drew her pistol and screaming "Stop! Stop!" Harris ducked his head, hit the gas and the Jeep slammed into her. She fired once, the bullet shattering the windshield. Harris ditched the stolen car a few blocks away.

Three others, identified as Harris' accomplices, also face murder charges in the police officer's death and will stand trial. Prosecutors say they were burglarizing a home in the moments when Caprio was hit, but under Maryland law, if someone's killed during a burglary, accomplices can be found guilty of the slaying along with the killer.

Harris was also found guilty of burglary, a necessary step before jurors could even consider the felony murder charge. Sentencing is set for July.

The case turned into a political hot potato. Even before Caprio was buried, various authorities in Maryland started blaming each other for having allowed Harris to be on the streets while he awaited sentencing for auto theft. He was technically still under state supervision when he ran over the Baltimore County officer.

A slightly-built ninth-grader at the time of the slaying, Harris had been deemed a high risk by Maryland's juvenile services department. He had a string of arrests for auto theft, and had skipped out of juvenile custody repeatedly. His own mother had asked officials to detain him, hoping to avoid any more trouble.

Despite all that, a judge transferred Harris from a juvenile facility to house arrest with his mother in impoverished West Baltimore. Harris had been fitted with an ankle bracelet that didn't track his whereabouts, simply indicating whether he was inside or outside their apartment in Gilmor Homes, a public housing project on the city's troubled west side.

Days later, Harris went AWOL again. And a week after that, he ran over Caprio.

On Wednesday, Baltimore County Executive Johnny Olszewski thanked the jurors, saying justice was delivered. "The past couple of weeks have undoubtedly been difficult for Amy's family, friends, and co-workers at the Baltimore County Police Department," he said in a statement.

The courtroom's gallery was filled with Caprio's loved ones and police colleagues.

Warren Brown, Harris' lawyer, said he hoped the jury's verdict could serve as a kind of warning for other struggling juveniles. The Baltimore defense attorney took on the case pro bono.

"This whole thing has been a tragedy. You've got an officer who gave her life in the line of duty. You've got a kid that is lost and finds himself in this type of predicament. As I indicated at the beginning of this trial there would be no winners, only losers," Brown said outside the courthouse.

Caprio and her husband had been planning to celebrate their third wedding anniversary before she was killed.