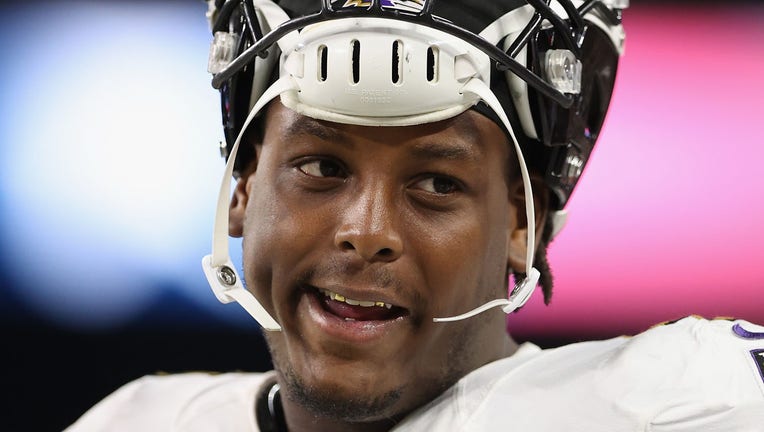 Linebacker Jaylon Ferguson #45 of the Baltimore Ravens on the sidelines during the NFL game at Allegiant Stadium on September 13, 2021 in Las Vegas, Nevada. The Raiders defeated the Ravens 33-27 in overtime. (Photo by Christian Petersen/Getty Images)

BALTIMORE - Baltimore Ravens linebacker Jaylon Ferguson died due to the combined effects of fentanyl and cocaine, according to officials.

Ferguson was found unresponsive in his North Baltimore home on the night of June 21. He was pronounced dead on the scene by medics.

The Ravens drafted Ferguson, nicknamed "Sack Daddy," in the third round of the 2019 draft, and he played his whole pro career with the team. He appeared in 38 games and had 4 1/2 sacks.

Ferguson made nine starts as a rookie for the Ravens in 2019, and he also started the team’s only playoff game that season. The linebacker spent time on the COVID-19 list early last season but ended up appearing in 10 games.

"We are profoundly saddened by the tragic passing of Jaylon Ferguson. He was a kind, respectful young man with a big smile and infectious personality. We express our heartfelt condolences to Jaylon's family and friends as we mourn a life lost much too soon."