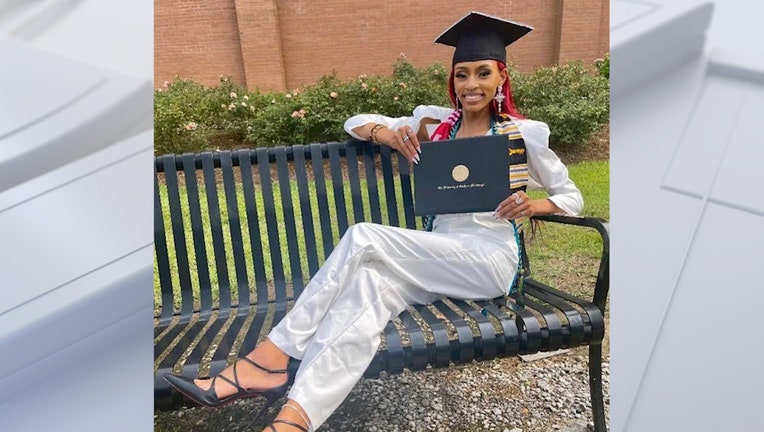 BATON ROUGE, La. - Diamond "Donna" Jonise still hopes to be a model one day even after a deadly car accident left the 23-year-old paralyzed from the waist down, according to relatives.

Jonise, who’s the granddaughter of Louisiana State Representative C. Denise Marcelle, and seven of her colleagues were traveling in a Winnebago RV when it collided with a tractor-trailer on Interstate 66 in Fauquier County, according to the Virginia State Police.

Marcelle said the truck blew a tire and either slowed or stopped in front of the RV, causing the crash. She said the group was heading to New York for New York Fashion Week.

Marcelle said two ladies traveling with Jonise died while Jonise was ejected from the RV and landed on the interstate. She was airlifted to a hospital with multiple fractures and bleeding from the brain, Marcelle said.

"Diamond stands tall in the face of any adversity and will overcome this tragedy,"  her grandmother said.

Since the accident, Jonise has undergone two spine surgeries, a pelvis surgery where she has 57 staples in her hip.

Marcelle said her granddaughter pursued modeling after suffering from depression and a suicide attempt in high school.

"She became an advocate for suicide prevention and mental health awareness," Marcelle added.

Marcelle said she recently visited her granddaughter at a Virginia hospital. She’s currently being transferred to Touro Rehabilitation Center in New Orleans.

"She’s feeling grateful that she survived the crash and has faith that God will restore her," she said. "She’s confident that she will model again."

"Diamond stands tall in the face of any adversity and will overcome this tragedy," Marcelle continued.

RELATED: 14 people on board as car crashes into bus on Route 70 in Cherry Hill, officials say

The grandmother said the family is working to get Jonise to a facility where she can start rehab that specialized in spinal injuries.

The family has also set up a GoFundMe page to help raise funds for medical expenses.

Meanwhile, VSP continues to investigate the accident. They identified the deceased victims as 39-year-old Lenisha Simon and 24-year-old Brenda Oyervides, both of Houston Texas. Four other people in the RV suffered minor injuries and were transported to Warren Memorial Hospital.

Authorities said none of the passengers in the RV were wearing seatbelts.

The truck’s driver, 25-year-old Ifreke Inyang of Houston, was also hurt in the crash and was wearing a seatbelt, VSP said. However, he’s charged with reckless driving and driving without a valid operator's license.