Facts you may not have known about Apple Inc.

Here are some interesting facts about the tech giant Apple Inc., including how the company got its name and who the original three founders were.

MONROVIA, Calif. - A fully-functional Apple-I computer, which was built by Apple founders Steve Jobs and Steve Wozniak and sold out of Jobs’ garage, recently sold for $500,000 at an auction in Southern California.

In 1976, Apple began with Jobs and Wozniak in a garage and later grew into the largest technology company on Earth. The Apple-1 computer is one of the few surviving examples of the company’s first computer product — an invention that launched a trillion-dollar empire, according to John Moran Auctioneers, which held the Nov. 9 auction in Monrovia, California.

The winning bid for the rare computer was received Nov. 9 from a collector outside the U.S., said Noelle Valentino, a manager for the auction house, told the San Gabriel Valley Tribune. The $500,000 sale price was 750 times more than the $666.66 price tag in 1976. 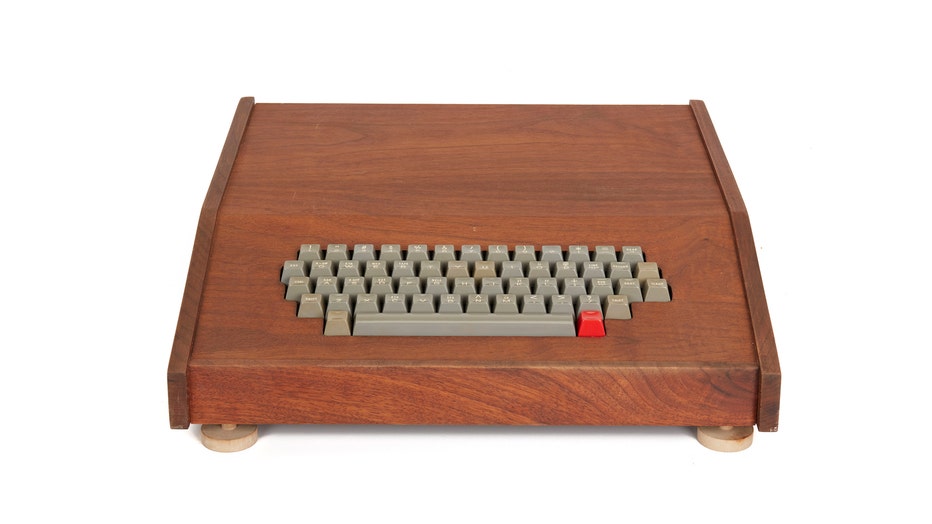 The Apple-1 had been estimated to sell for anywhere between $400,000 to $600,000. Neither the seller’s identity nor the buyer’s identity was released.

The lot included an Apple-1 "NTI" motherboard marked with a 1976 copyright, an Apple Cassette Adapter in an original koa wood case with a Datanetics Keyboard Rev D, an Apple-1 connecting cable, a power supply and a 1986 Panasonic video monitor, the listing says.

It was also accompanied by a copy of the Apple-1 Basic Manual, the Apple-1 Operations Guide, an original MOS 6502 programming manual, and two Apple-1 software cassette tapes with a hand-written index card with memory locations for the Apple-1 loading software.

There are only six known examples of the koa wood case left, and this unit is one of them, the auction house said. The wood was once abundant, particularly on the West Coast because it is native to Hawaii, but has become rarer and more expensive amid cattle grazing and extensive logging.

This particular Apple-1 Computer only had two owners prior to the sale. It was originally purchased by an electronics professor at Chaffey College in Rancho Cucamonga, California, who then sold it to his student in 1977.

"I purchased this used from the original owner in 1977. He was a teacher at Chaffey College, and I was taking his programming course. He was excited to buy the Apple-II and sold me this for about $650. Of course, nobody knew it would become a collector's item," the seller told the auction house.

John Moran Auctioneers said the Apple-1 underwent "an extensive authentication, restoration, and evaluation process by one of the foremost experts in the field, who inspected all components and generated a full condition report for the Apple-1."

Some 200 Apple-1 computers were designed by Wozniak and assembled and tested by Jobs, his sister, Patty, and friend and employee Daniel Kottke at Jobs' home. A total of 175 of them were sold for $666.66, a figure that catered to "Wozniak's love of repeating numbers," John Moran Auctioneers notes.

Out of the 175 computers sold — 50 of them went to Paul Terrell, the owner of ByteShop in Mountain View, California. When Jobs personally delivered the 50 boxes each containing an Apple-1 kit, Terrell was not happy, according to an account shared by the auctioneer.

"(Terrell) anticipated 50 all-in-one units that could simply be plugged in by the consumer, an unheard-of concept at the time. Jobs defended his delivery by pointing out that each box included all necessary elements to compose the machine and further convinced Terrell that ByteShop could make a profit by selling keyboards, monitors, and power supplies within their store as an opportunity to upsell the product," John Moran Auctioneers writes.

The company later introduced the 1977 Apple II computer, its first computer that was designed to be used right out of the box instead of having to be assembled, according to Apple Insider.

But Apple-1, the genesis of today’s MacBook, iPad and iPhone, is like owning a piece of tech history where "it all began," the auctioneer noted.

Wozniak was quoted in Walter Isaacson’s 2011 biography "Steve Jobs" regarding the Apple-1 as saying: "We were participating in the biggest revolution that had ever happened, I thought. I was so happy to be a part of it."