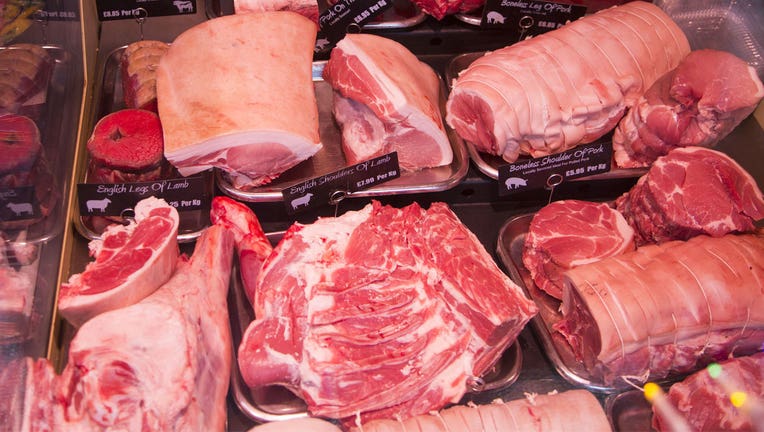 Slabs of meat are shown in a meat deli case in a file photo. (Photo credit: Getty Images)

LOS ANGELES - - A report published by a nonprofit focused on better ways to sustain a growing population offered solutions to feeding nearly 10 billion people by 2050 – and one of those involved cutting back on meat consumption.

The World Resources Institute published its latest report called “Creating a Sustainable Food Future,” which was prepared as a 22-item “menu” divided into five “courses” on how to keep the planet going with a larger population.

One of the dozens of proposed solutions to make eating sustainable was for 20 percent of the world’s population to reduce meat consumption by 40 percent. That 20 percent of the population includes the United States, Canada, Europe, Latin America and the former Soviet Union, according to the report.

In 2010, those countries consumed more than half of the world’s meats.

The report stated that overall demand for food will increase by more than 50 percent, with the demand for animal-based foods increasing nearly 70 percent. But the demand for ruminant meat, such as beef, sheep and goat, will grow by 88 percent, according to the report.

In order to try and keep up with those food demands, the report states crop calories would increase by about 56 percent, meaning land about two times the size of India would have to be used.

But since the mid-1970s, when meat consumption was at an all-time high for Americans and Europeans, the demand for ruminant meats has decreased by about one-third in both countries, according to the report.

With that in mind, the suggested reduction in meat consumption for Americans would mean only eating a little more than one burger per week.

The report also indicated that while a plant-based diet would be best, even just reducing consumption of ruminant meats and eating leaner ones, such as chicken and pork, would still cut down on greenhouse gas emissions and land-use demands.

The more than 500-page report stated three gaps would need to be closed by 2050: the food gap, land gap and greenhouse gas mitigation gap.