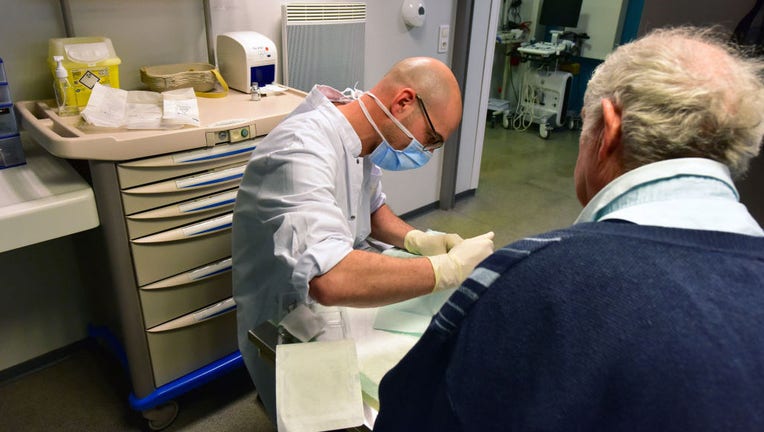 Practitioner and patient during a consultation at the Urgent Care Medical Center. (Beucherie S/Andia/Universal Images Group via Getty Images)

WASHINGTON - The burden of medical debt is a problem for many people, but a new survey takes an in-depth look at the financial impact millions have to deal with carrying these overwhelming health expenses.

An investigation from Kaiser Health News and NPR finds that 100 million people have been affected by medical debt. KHN and NPR used a part of their reporting from a poll conducted by the KFF (Kaiser Family Foundation) group, a nonprofit organization focusing on national health issues.

KFF surveyed over 2,000 adults which included interviews with more than 1,200 people who have health care debt. The agency’s survey defines health care debt as money a person currently owes or debt they have based on personal medical or dental bills or someone else’s medical or dental care, including past bills, bills they can’t pay, and medical bills they’re paying off that go to a medical provider, debt owed to a bank, collection agency, or lender that includes debt or loans used to pay medical and dental bills.

How much do people owe in medical debt?

The number of medical debts' people in the poll said they owe ranged with some owing less than $1,000 while others revealed they owe more than $10,000 or more in medical bills.

RELATED: Medical debt to be wiped clear of many credit reports

Who is most impacted by medical debt?

Roughly one in five people (21%) say they have bills paid to a provider compared to one in six individuals (17%) saying they owe a medical debt to a bank, collection agency, or other lenders for loans used to pay medical or dental bills.

Nearly half of adults without a college degree (47%) say they have health care debt compared to about three in ten college graduates (31%). While a majority of people (57%) with household incomes under $40,000 currently have debt due to medical or dental bills.

Women and people of color impacted by medical debt

Women and people of color were among the groups polled to share their experiences with medical expenses.

The KFF poll found that nearly half of women (48%) have debt due to medical or dental bills, compared to about a third of men (34%).

Regarding race and ethnic groups, the agency reported half of Black (56%) and Hispanic (50%) people say they have debt due to medical or dental bills, compared to fewer White adults (37%).

Health care debt spiked for people between 30 and 49 years old. Fifty-two percent of respondents in this group say they currently have health care debt which KFF found is based on half of the individuals in this demographic having children under 18 years old.

Parents are more likely than non-parents to report having their own health care debt or taking on another person's medical or dental bills, the agency shared.

The poll also revealed that over one in five adults 65 and older (22%) said they currently owe money due to medical or dental bills. According to KFF, Medicare provides coverage to older people but out-of-pocket costs are still likely.

The government reports more than 43 million Americans have medical debt on their credit reports. But relief is coming for those who need support, FOX 5 Atlanta reported in May.

Consumers will have a year to pay off medical debt before it even appears on a credit report. Lastly, in 2023, any unpaid medical debt under $500 won't be reported or posted as part of your credit score.

FOX 5 Atlanta contributed to this story. This story was reported from Washington, D.C.