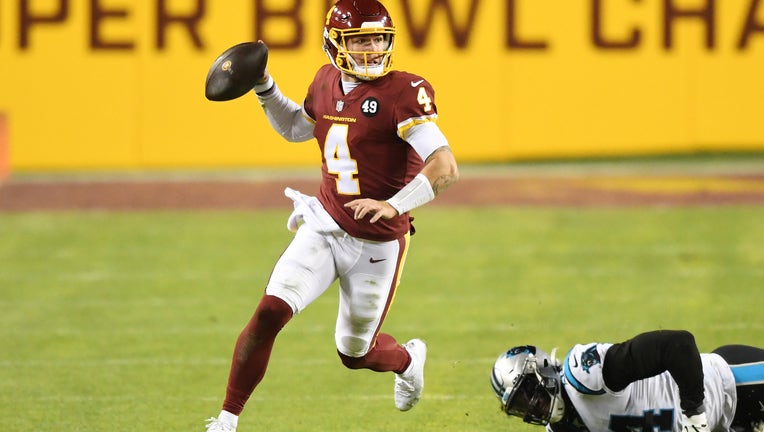 Taylor Heinicke #4 of the Washington Football Team scrambles with the ball away from the tackle of Efe Obada #94 of the Carolina Panthers during the third quarter at FedExField on December 27, 2020 in Landover, Maryland. (Photo by Mitchell Layton/Get

WASHINGTON - The Washington Football Team just suffered a big blow before even stepping on the field in its playoff game tonight against Tampa Bay.

The team announced on Twitter that Quarterback Alex Smith will be inactive.

Undrafted Old Dominion product Taylor Heinicke will get the start under center.

Washington is 5-1 this season when Smith starts. He is the frontrunner for the NFL's Comeback Player of the Year award after coming back from a devastating leg injury that required 17 surgeries.

Washington lost 13-20 in Heinicke's lone appearance this season in Week 16 against Carolina.

Heinicke was solid in the outing, completing 12 of 19 passes for one touchdown and no interceptions.

The game kicks off at 8:15 p.m. Saturday. The Washington Football Team last won a playoff game about 15 years ago in the 2005-06 season against, coincidentally, Tampa Bay.

RELATED: The last time the Washington Football Team won a playoff game was in 2006 - here's what was going on