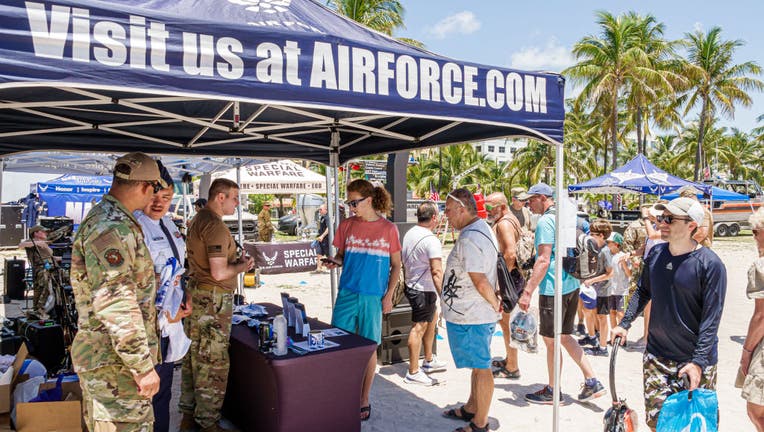 WASHINGTON (AP) - When "Top Gun: Maverick" roared into theaters in late May, the Air Force was ready.

The smash hit movie may feature Pete "Maverick" Mitchell as a hotshot Navy aviator, but to much of the movie-going public, the distinction between Air Force and Navy fighter jets is lost. So Air Force recruiters struggling to meet their enlistment goals took boxes of free mugs and lanyards, and fanned out to movie theaters for the premiere, determined to capitalize on the jet-fueled excitement surrounding the film.

These are tough times for military recruiters. With COVID-19 complicating their work and low unemployment reducing the number of potential recruits, all services are having problems finding young people who want to join and can meet the physical, mental and moral requirements.

The Army especially is struggling. On Tuesday, it said it will cut the total number of soldiers it expects to have in the force over the next two years. If those trends continue, that could present challenges as it tries to meet future national security and warfighting missions.

The situation is somewhat less dire for the Air Force, Navy and Marine Corps. Leaders of those branches say they hope to meet or just slightly miss their recruiting goals for this year. But they say they will have to dip into their pool of delayed entry applicants, which will put them behind as they begin the next recruiting year.

So recruiters are offering bigger bonuses and other incentives to those who sign up. And they are seizing on the boost that Hollywood may offer – such as the buzz over the sequel to the 1986 hit "Top Gun."

Top Gun: Maverick - The Power of the Naval Aircraft Featurette

Tom Cruise stars in "Top Gun: Maverick," in theaters May 27.

"When the original ‘Top Gun’ was released, the Navy and Air Force received a pretty good recruiting bump," said Maj. Gen. Edward Thomas, head of Air Force Recruiting Service. "Frankly, we hope people get excited all over again about what we do. Whether they want to aim high or fly Navy, we just want them to come join us. We want them to be excited about military service."

The Air Force said it usually goes into each year with about 25% of its recruiting goal already locked in, but this year will have about half of that. The Navy and Marine Corps often have as much as 50% of their goals at the start of the year, but also will see their percentage slashed.

Gen. Eric Smith, assistant commandant of the Marine Corps., said the Marines are focusing more on retention than recruiting. He said the Marine Corps "will make or come very close to making" its recruiting goals this year, but at the expense of the 2023 pool. And when recruits have less time to prepare before reporting to boot camp, more fail to complete their training, he said.

The situation is more dire for the Army, which a top general says faces "unprecedented challenges" in recruitments.

An array of factors has made recruiting more difficult across the services.

Two years of the COVID-19 pandemic shuttered schools and other large public events that the military relies on to meet young people face to face.

The low unemployment rate means fewer people are looking for jobs. Private companies often pay more and are more nimble in responding to a tight labor market by raising salaries. Military salaries vary widely and are determined by Congress.

Across the country, fewer people are familiar with the military. Many do not know anyone who served and do not have bases in their regions. As political and cultural divisions over race, abortion, vaccines and other issues tear through the nation, trust in the government — including the military — has declined.

At the same time, only about 23% of young adults are physically, mentally and morally qualified to serve without receiving some type of waiver. Moral behavior issues include drug use, gang ties or a criminal record.

"We look at it as the toughest recruiting environment that we’ve had in decades," said Rear Adm. Lex Walker, who heads Navy Recruiting Command. "Companies are also offering great pay, they’re offering sign-on bonuses, help with college. They’re offering many of the same benefits the Navy has historically used to recruit."

One short-term solution is money. The Air Force and Navy commanders both said they had to request more money for bonuses this year as they began to see the recruiting struggle worsen.

For the first time in a decade, the Air Force approved two rounds of additional bonuses this budget year. Last October the service budgeted $17.5 million for enlistment bonuses, but in April service leaders added another $14 million, and in July they put in $7 million more.

The Navy, said Walker, has also increased bonuses by about $100 million. It also has also relaxed some restrictions to make it possible to enlist some who may not have qualified before. He said the Navy expanded its waiver policy for some prior marijuana use and for tattoos — allowing recruits to have visible ones in more places, such as the neck. A new pilot program allows single parents with up to two children over a year old to seek a waiver to enlist as long as the recruits have someone who can care for the children in case of a deployment.

The recruiting officials also said it's crucial to increase the public's awareness of the military and the benefits available for serving. They said recruiters and all members of the military need to get out into their communities, connect with people and tell their stories.

Air Force Sgt. Eric Way did just that at the Regal Cinema in Waterford, Connecticut, during the premiere of "Top Gun: Maverick." Standing in the lobby, surrounded by Air Force swag and banners, he captured the attention of a 22-year-old from Old Lyme, who later told him the movie convinced him that he should enlist.

Air Force Senior Master Sgt. Gervacio Maldonado, who helped organize the New England recruiting campaign centered on the movie’s premiere, said recruiters spoke to the young man before the film and gave him social media information to contact them later.

It worked. The man has already done his first interview.

Maldonado said the man later told a recruiter that he had been debating the enlistment idea for some time and said that "after watching the movie, that was my tipping point and I want to start the process."