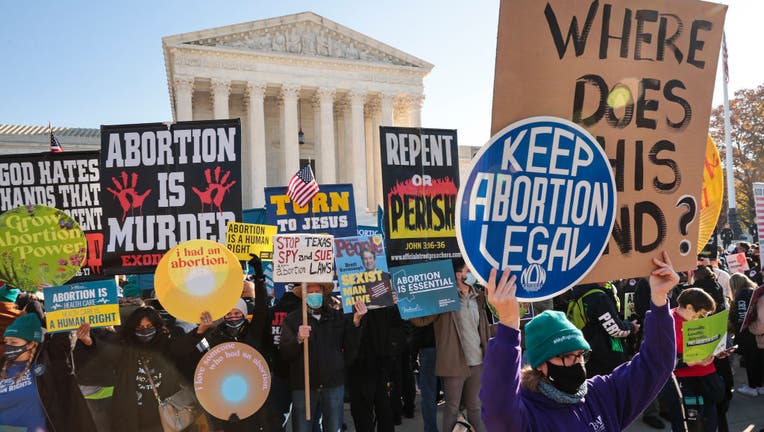 WASHINGTON, DC - DECEMBER 01: Demonstrators gather in front of the U.S. Supreme Court as the justices hear arguments in Dobbs v. Jackson Women's Health, a case about a Mississippi law that bans most abortions after 15 weeks, on December 01, 2021 in W

SACRAMENTO, Calif. - Fearing the U.S. Supreme Court will soon overturn Roe v. Wade, California Democrats on Tuesday moved quickly to ensure the state’s progressive voters have a chance this fall to make abortion a constitutional right in the nation’s most populous state.

A proposed amendment to the California Constitution that would explicitly ban the state from denying or interfering with abortions or contraceptives cleared two legislative committees in a single day on Tuesday, an unusually fast pace for a Legislature that many times takes two years to move a bill through its arduous process.

Lawmakers are moving so fast because they need voters to approve the amendment before it can become law. The soonest voters could do that is November, but for that to happen the amendment must clear the state Legislature by a two-thirds vote before the end of the month.

If it does make it to the ballot this year, it has a good chance of passing. Among likely voters, 76% oppose overturning Roe v. Wade, according to an April survey by the Public Policy Institute of California.

"California needs to act now — this year, not next year, now — to make crystal clear that we value reproductive choice," said Sen. Scott Wiener, a Democrat from San Francisco who voted for the amendment Tuesday.

The amendment says the state "shall not deny or interfere" with people’s "fundamental right to choose" to have abortions. Opponents warned that wording was so broad that it would permit abortions even after the viability of a fetus, which California currently only allows if the life or health of the mother is in danger.

"This constitutional amendment as written will legalize and protect abortion up to the point just prior to delivery," said Kathleen Domingo, executive director of the California Catholic Conference. "It is distressing that so many California legislators would sign their names to legislation that allows the taking of a human life moments before birth."

Voters in Vermont will consider an amendment to their state constitution this November that would protect "personal reproductive autonomy." But the amendment does not include the word "abortion" and makes an exception "justified by a compelling State interest achieved by the least restrictive means."

State constitutions in Alabama, Louisiana, Tennessee, and West Virginia declare abortion is not a protected right. Meanwhile, 16 states and Washington, D.C., have at least some abortion protections codified in law, including California, according to the Guttmacher Institute, an abortion rights group.

California already has some of the most expansive abortion laws in the country. The state uses tax dollars to pay for abortions of people on its Medicaid program, requires private insurance companies to cover the procedures without charging a co-pay or a deductible, and allows minors to get abortions without their parent’s permission.

Those things are possible because, in 1972, California voters added a right to privacy to the state constitution. State courts have cited that right to privacy while upholding many of the state’s abortion laws. Roe v. Wade, the U.S. Supreme Court’s landmark 1973 decision that prevents states from banning all abortions, was based on the U.S. Constitution’s implied right to privacy.

But a draft ruling from the U.S. Supreme Court earlier this year showed a majority of justices had voted to overturn Roe v. Wade, ruling that a right to privacy does not guarantee access to abortion. That opinion is not official yet because it hasn’t been published, but it shows how the court might rule on the issue this month.

Now, California Gov. Gavin Newsom and the Democrats in charge of the state Legislature are worried their state constitution’s right to privacy might not be enough to protect abortion in the future should the political winds change and usher in new leadership in the state.

"I want to know for sure that that right is protected," said Senate President Pro Tempore Toni Atkins, a Democrat from San Diego. "We are protecting ourselves from future courts and future politicians."

The amendment is one of 14 proposals moving through the California Legislature this year to strengthen and expand access to abortion. Anti-abortion advocates have tried in vain to slow them down, with hundreds rallying outside the state Capitol and flooding the phone lines during public comment periods of legislative hearings.