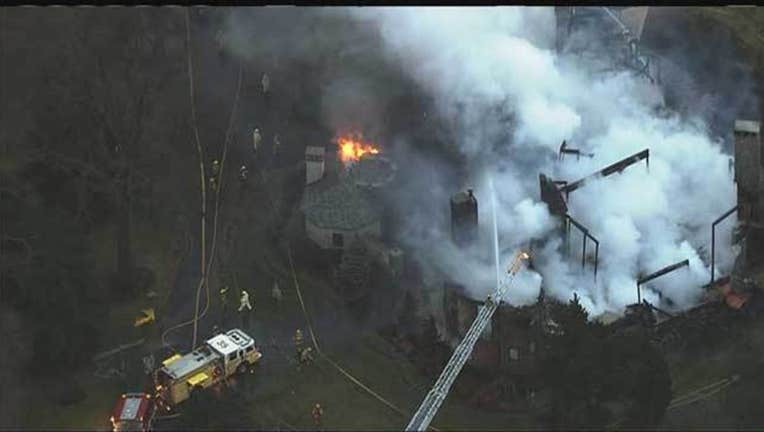 A day after investigators released the cause of the January 19th deadly mansion fire in Annapolis that killed a couple and their four grandchildren, 911 calls from the morning have been released by authorities.

Investigators announced a faulty electrical outlet powering the Christmas tree lights ignited the tree skirt and then the tree itself.

The 15-foot tree was set up in the home's great room that had 19-foot ceilings. When you add the tree stand, the tree was very close to the ceiling.

Investigators say the tree lights were kept on 24 hours a day and the tree had been cut about two months earlier, so this was likely a very dry tree.

The great room was connected to the sleeping and living areas where the victims were all in bed.

One of the 911 calls was made by a neighbor. Just two minutes earlier from that call, the alarm company called 911 saying the fire alarms had been activated on all levels of the house.

Dispatcher: "Fire and ambulance. What is the exact location of the emergency?"

The neighbor then gives the location to the 911 dispatcher.

Caller: "I mean, the whole house is engulfed."

Dispatcher: "Is anybody inside?"

Dispatcher: "Okay. We're on our way. We got an alarm company, they called it in, but it is on fire."

Caller: "Oh my God. I'm getting ready to call my neighbor next door."

Dispatcher: "Okay. We're on our way, ma'am. Keep everybody away and if you can find out if anybody is in the house, let us know okay?

The homeowners, Don and Sandra Pyle, were killed in the fire along with four of their grandchildren, 8-year-old Lexi Boone, 7-year-old Katie Boone, 8-year-old Charlotte Boone and 6-year-old Wes Boone.