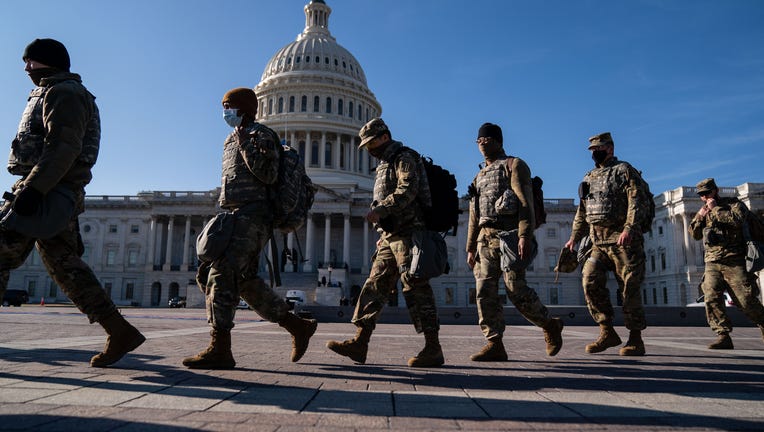 WASHINGTON, DC - JANUARY 14: Members of the National Guard, outside the U.S. Capitol Building a day after the House of Representatives impeached President Donald Trump, and over a week after a pro-Trump insurrectionist mob breached the security of th

WASHINGTON - The National Guard says it will keep more than 5,000 troops in the nation's capital through mid-March following its mass deployment for President Biden's inauguration.

About 7,000 of the 25,000 troops sent to secure Inauguration Day remain in D.C., a National Guard spokesman told FOX 5 on Saturday.

The National Guard will continue to draw down its forces here to about 5,000 through mid-March.

The plan is to continue assisting local law enforcement following the unprecedented attack this month on Capitol Hill.

Authorities reported a handful of minor arrests on Inauguration Day.

"We are providing assistance such as security, communications,
medical evacuation, logistics, and safety support to state, district and federal agencies," the spokesman said in a statement.

The statement is the clearest timeline yet for the extra military presence in D.C. deployed for President Biden's inauguration.

Officials said Friday that more than 100 National Guardsmen deployed to the nation's capital have since tested positive for COVID-19.

That report followed the controversy Thursday night that Capitol Police ousted troops from the U.S. Capitol, forcing the guardsmen to sleep in a parking garage.

Lawmakers from both parties condemned the move, and the troops were eventually allowed to return to the Capitol grounds for the night.

RELATED: Thousands of National Guard troops in DC return to Capitol after relocated to parking garage