The search continues for a man who shot two people at a youth football game Sunday morning at a middle school in Manassas.

MANASSAS, Va. - The search continues for a man who shot two people at a youth football game Sunday morning at a middle school in Manassas.

A witness says the shooting, which injured two men, happened just a few yards away from where kids as young as four were playing.

Prince William County police said they responded around 10:15 a.m. to Benton Middle School at 7411 Hoadly Road. They said the two shooting victims are expected to survive.

Dean Ladson, a parent and organizer of 703 United Youth Football, said children playing Sunday were four to 14-years-old. He said there were a few hundred children and spectators.

"People panicked and now you're scrambling to find your kid," Ladson said. "Like my son, he's 11-years-old, he plays and so he was nowhere near me." 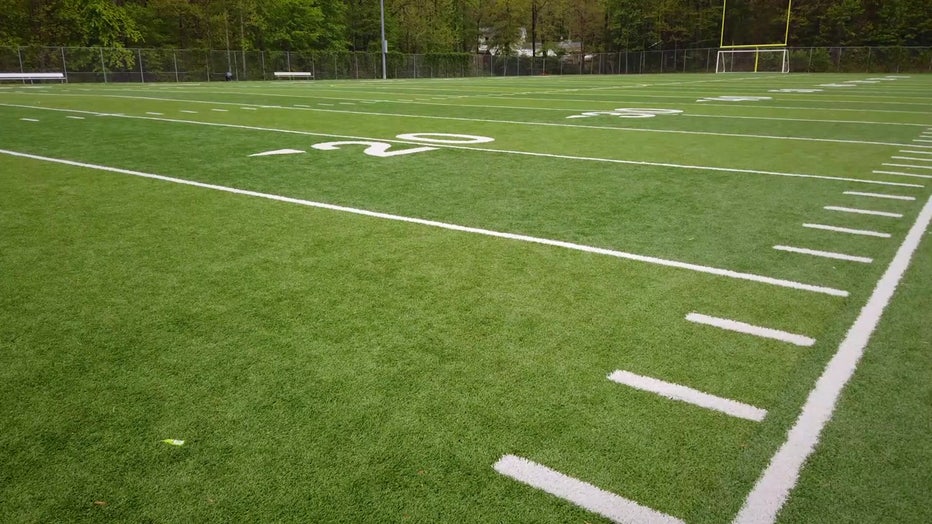 Ladson said when he saw the men arguing on the sideline, he went over to try to de-escalate the situation. He said he was right next to the shooter when that man pulled the gun and opened fire.

"Then he takes off running up the hill," said Ladson. "It happened just that fast. You got all these kids running around and I say this: a little to the left, a little to the right, you're going to hit a kid."

He said people were in disbelief. Police call it a chaotic scene Ladson said he called 911 and went to find his son.

"He's fine. He made a statement to my wife, she asked how he was doing he said he's just glad to be alive,'" said Ladson. "And that's harsh for an 11-year-old to have to say."

Ladson got photos of police carrying one of the shooting victims from the field.

"The first responders that got there did an outstanding job trying to get to the victims quickly," said Prince William County Deputy Police Chief Jarad Phelps.

Pheps said investigators are still trying to identify the shooter and they need help. He said many witnesses left before they could speak to police.

"We could've had more than two victims today," Phelps said. "We definitely could've had children injured, it was a very dangerous situation."

Ladson believes there were people at the game who know who the shooter and he says they have to do the right thing.

FOX 5 uncovers new details about a shooting that happened at a middle school in Northern Virginia. It’s the second shooting on a Prince William County school campus in just two weeks.

"Bring this gentleman to justice," he said. "Because we can't have that. This is youth football, they're babies out there. I call them precious cargo."

Witnesses say the shooting may have stemmed from a family dispute. Detectives said they are searching for a suspect described as a Black man with a medium complexion, between 5'6"-5'10" and a thin build.

Anyone with information should call the Prince William County Police Department at 703-792-7000.