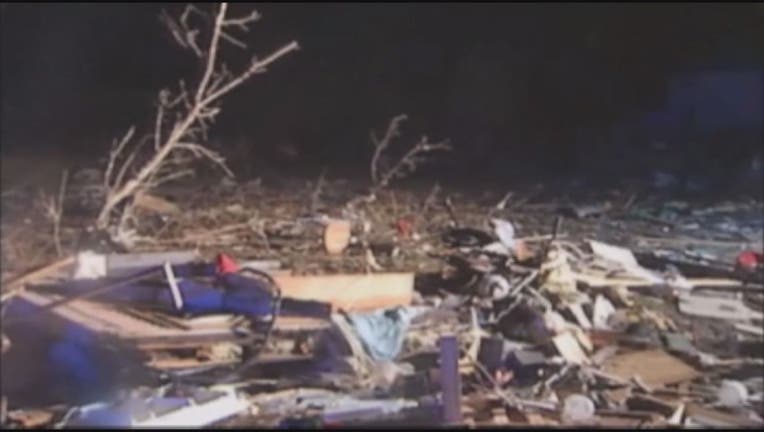 FAIRDALE, Ill. (AP) -- A tornado hit the tiny northern Illinois town of Fairdale, killing one person, injuring seven and sweeping homes off their foundations as large storm system swept across a large swath of the country.

The vast storm system brought high winds and rain to east Texas, ripping off a church rooftop there and damaging a nursing home, prompting an evacuation, authorities said.

In the Illinois town, a 67-year-old woman was found dead inside her home, DeKalb County coroner Dennis Miller said at a news conference early Friday. Seven others were taken to hospitals with injuries after the National Weather Service first tweeted about 7 p.m. Thursday that a tornado was on the ground in the region.

In Fairdale, an unincorporated town of about 200 residents about 80 miles northwest of Chicago, "17 structures have been determined to be destroyed," Matthew Knott, division chief for the Rockford Fire Department, told The Associated Press. "All of the others have sustained damage of some sort."

The town's power was out early Friday, and everyone had been evacuated. A shelter was set up at a nearby high school with the Red Cross and Salvation Army assisting.

Authorities said that they were fairly confident no more victims were among the debris but that they would be working Friday to account for every single resident, including those who may have left town before the storm.

Kirkland Community Fire District Chief Chad Connell said he watched the tornado move across the area from his porch. Asked to describe it, he was at a loss of words, saying only "it was big" as he shook his head.

"I've never seen anything like it in my life," he continued.

Some 20 additional homes were severely damaged or destroyed in Illiinois' Ogle County, Sheriff Brian Van Vickle said, adding no deaths or significant injuries were reported there. Ogle County is adjacent to DeKalb County.

Van Vickle said 12 people were trapped in the basement of a restaurant in Rochelle in that state that collapsed during the storm.

One of those rescued from the Grubsteakers restaurant, Raymond Kramer, 81, told Chicago's WLS-TV that he was trapped with 11 others in the storm cellar for 90 minutes. They were freed unharmed only after emergency crews removed debris that had fallen all around.

"No sooner did we get down there, when it hit the building and laid a whole metal wall on top of the doors where we went into the storm cellar," Kramer said. "When the tornado hit, we all got a dust bath. Everyone in there got shattered with dust and debris falling out of the rafters."

The National Weather Service's "enhanced risk" area had stretched from northeast Texas to Michigan, Wisconsin and across the upper Midwest. Forecasters say Philadelphia, Washington and other parts of the Atlantic coast could see the same weather patterns Friday, including Augusta, Georgia, where the Masters golf tournament is taking place through the weekend.

One severe thunderstorm Thursday night damaged the roof of a nursing home in Longview, east Texas, and prompted the evacuation of about 75 patients, authorities said. No injuries were reported as emergency officials said power was knocked out to thouisands in that area of Texas.