WASHINGTON - Tornado warnings were firing off across the DMV Thursday evening as fast-moving storms hit the area. While the warnings for areas including DC, Alexandria, Prince George's County and Fairfax County have expired, storms and gusty winds are still expected in the area.

The storms have come in several rounds with the initial push of storms sometime between 12 p.m. and 4 p.m. this afternoon, with a secondary push beginning around 9 p.m. with damaging winds and large hail.

Your Fox 5 weather forecast at 6. 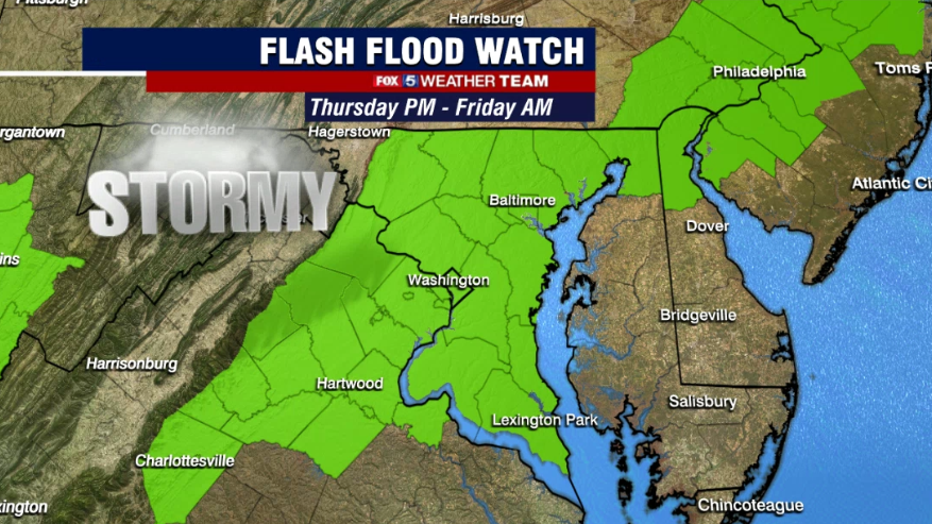 Perhaps the greatest threat for today is the heavy rains. Guidance has indicated rainfall amounts could exceed two to three inches in just an hour or two in some of the heavier thunderstorms. This leads to the risk of flash flooding, and most of our region including the D.C. and Baltimore corridors are under flash flood watches until 8 a.m. on Friday morning. 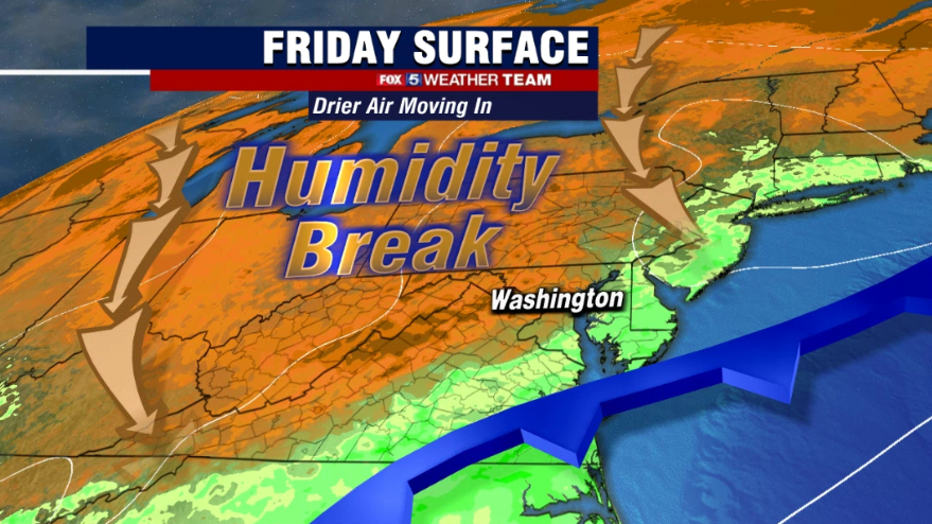 Expect a cloudy and damp start to Friday across the D.C. region. Though the steadiest of the rains should have moved on by sunrise, there could still be some scattered light showers or patch drizzle out there through at least the mid-morning hours.

Clearing should occur into the afternoon however and we should see some sunshine before the day is done. The wait will be well worth it though, as drier and more comfortable air returns to the area just in time for the holiday. 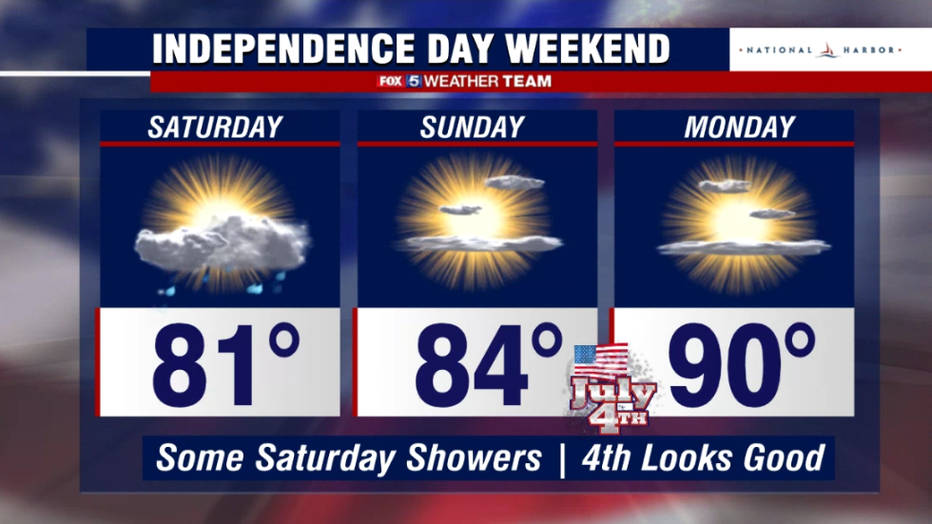 As the weekend begins, Saturday will actually feature a decent amount of sunshine and very comfortable temperatures. The one hiccup is that with an area of low pressure off the coastline, we could rotate down a couple of showers or a passing storm in the afternoon hours, but these should be scattered and are not anything that I would cancel outdoor plans for.

The 4th of July itself, which was at one time looking pretty wet, now looks like the pick of the weekend. Plenty of sunshine and temps that are warm and comfortable by early July standards. You have to go back to 2016 for a cooler July 4th, and it rained most of that day. We expect festivities on the 4th to get off without a hitch. Monday plans should not see any issues either, as sunshine should continue but temps will start to heat back up. 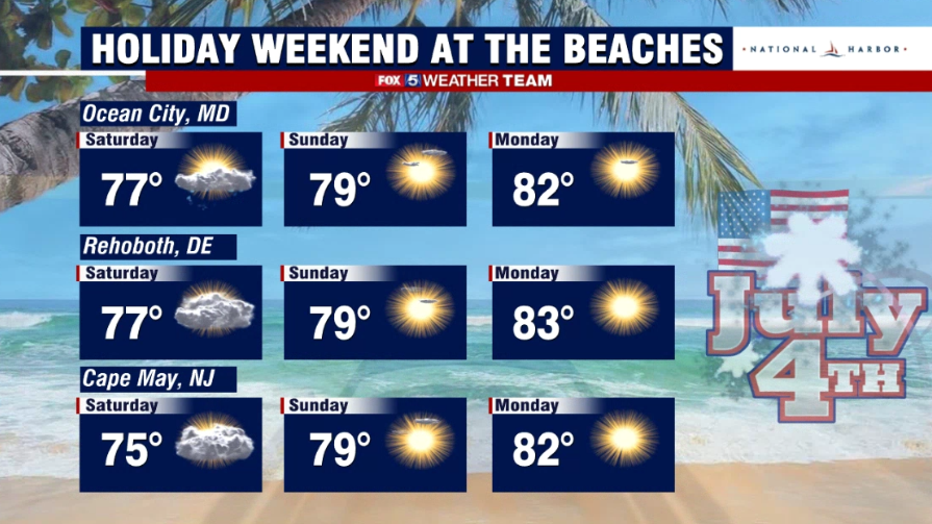 For the local beaches, the forecast through the weekend has improved just like back in Washington, D.C. Saturday is the one day where clouds may be a little prevalent and perhaps even an early morning sprinkle or shower along the coast, but the sun should break through more and more as the day goes on.

Note it will likely also be a little on the breezy side, but winds will improve throughout the weekend. The holiday 4th and the extended weekend Monday look fantastic. Should be "grade A" beach days for beachgoers. 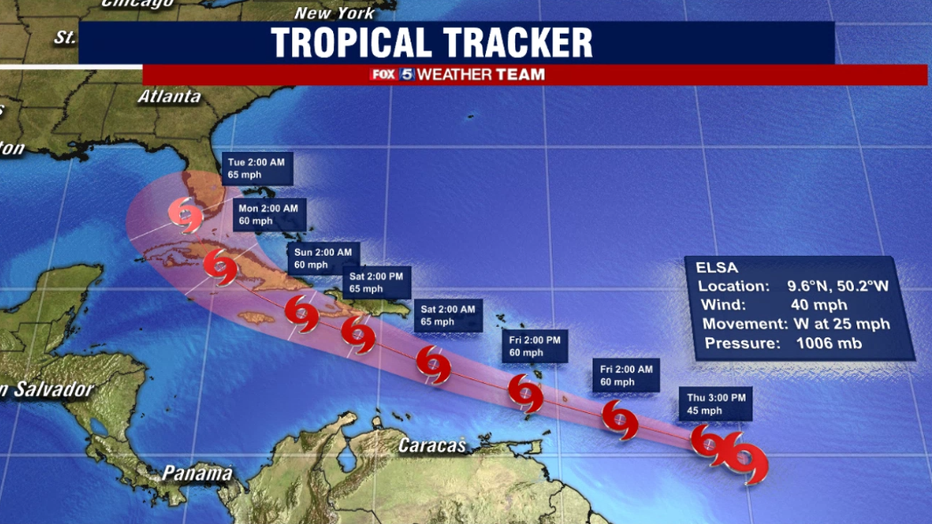 Beyond the holiday weekend, forecasters will have a very close eye on the tropics. Tropical Storm Elsa was newly named on Thursday morning, and has the potential to become the season's first hurricane depending on exactly how she tracks across the Caribbean. If she stays offshore and away from the islands, she will likely remain a stronger storm.

Several weather models are suggesting this could be the third system, after Claudette and Danny, in this very young hurricane season to impact the United States with a landfall. There is even some suggestion that the remnants could bring the D.C. region some rain by the latter half of next week…but those forecast details will need to be hammered out in the days ahead as we monitor how Elsa tracks.

From the Fox 5 Weather Team to all of you, have a safe and happy 4th of July holiday weekend!