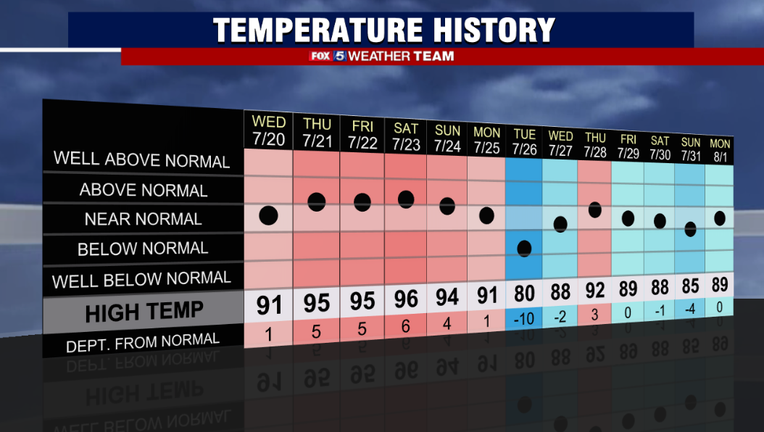 WASHINGTON - After our longest stretch of 90 degree plus weather in two summers during the middle of July, it was a nice end to the month with a bit of a break from the extreme heat – including this first day of August where D.C. hit 89 degrees for a high, only one day in the past week has exceeded the 90 degree mark.

That is set to change on Tuesday, which may start another extended stretch of heat that may go right into the next workweek.

Mike Thomas has the FOX 5 Weather forecast for Tuesday, August 2 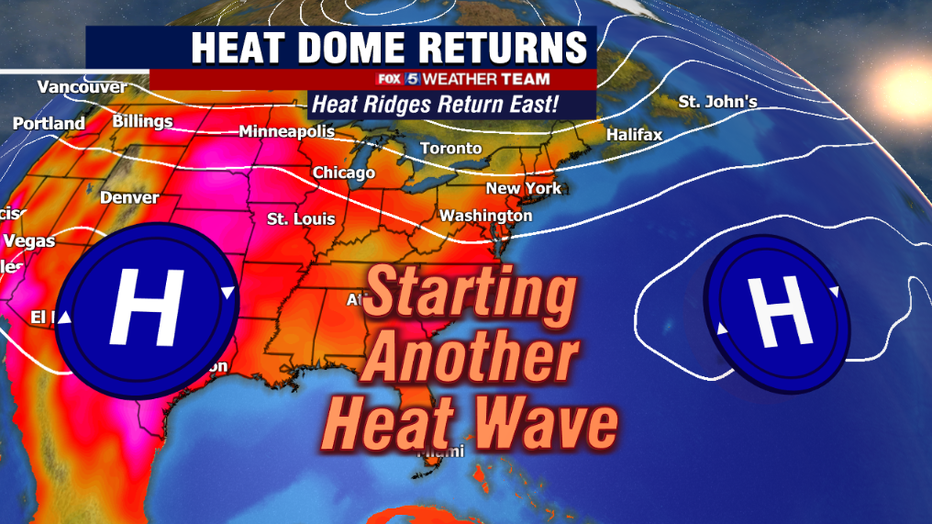 The culprit is an extensive ridge of high pressure, centered both over the southwest United States, with another near the island of Bermuda.

This eastern high in the Atlantic will be the primary culprit for the coming heat. While it has been relatively weak this past week, it is forecast to strengthen and build westward towards the Eastern Seaboard by the end of the week.

As it does so, the heat across the D.C. region is expected to intensify, peaking around Thursday as temperatures push into the middle 90s. 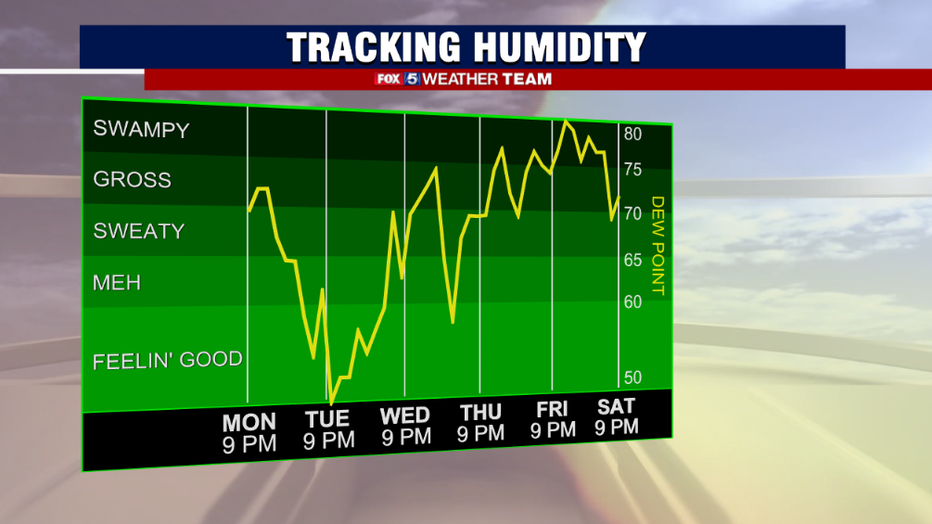 If there is some good news with the heat wave, it is currently not expected to be quite as intense as the last one. In fact, even though temperatures are expected to hit the lower 90s on Tuesday and Wednesday afternoon, humidity is expected to be pretty manageable. At least at first.

As the Bermuda High builds westward through the west, southwest winds will carry additional Gulf of Mexico and southern Atlantic moisture into our region.

Matthew Cappucci has the FOX 5 Weather forecast for Tuesday, August 2

Dew points will rise into the low to middle 70s by weeks end. The "real feel" temperature, or what it feels like outside based on humidity and temperature values, is expected to hit the triple digits by Thursday and Friday. At this time it does not look like we are talking heat advisories inside the beltway, as we need the real feel, known to meteorologists as the heat index, to hit or exceed 105° for that.

Areas on the eastern shore or in Southern Maryland, where humidity will be highest, will have a chance at heat advisories on Thursday and Friday, however. 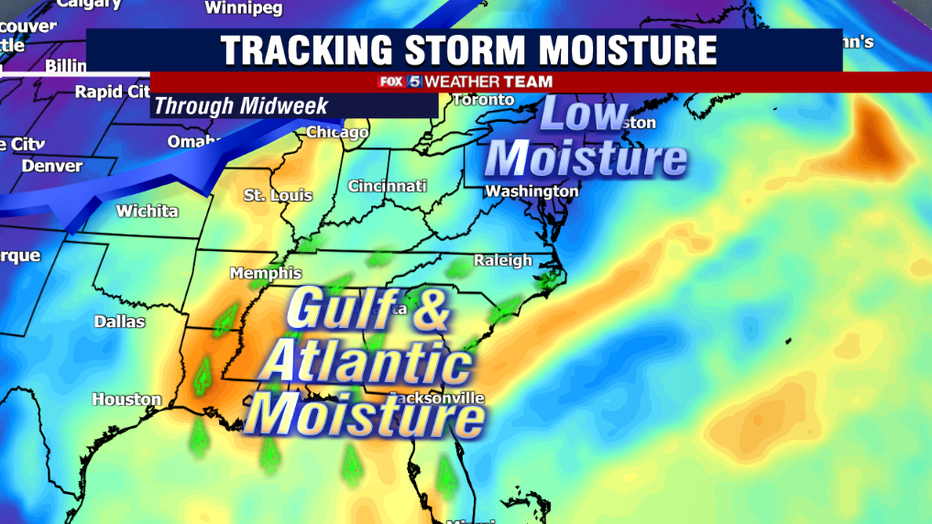 Of course, anytime we are talking about summer heat and humidity. The chance for thunderstorm is not usually far behind.

As mentioned above though, as the start of this heat wave humidity will be rather manageable. It will not be a "dry heat" but with dew points expected to be in the lower to middle 60s during the peak heating hours of the afternoon, the heat will not feel as sweltering as at the start of the last heat wave in July.

We have some drier Canadian air mixed in over the Northeast to thank for that. This does not mean that storms are impossible on Tuesday or Wednesday, but they should be very limited in scope. The best chances for storms through the middle of the week are what we call topography-driven cells, which are storms that form near and around the mountains as air is forced to rise as it travels over them.

Best chances for isolated storms over the next few days will be in our western zones. 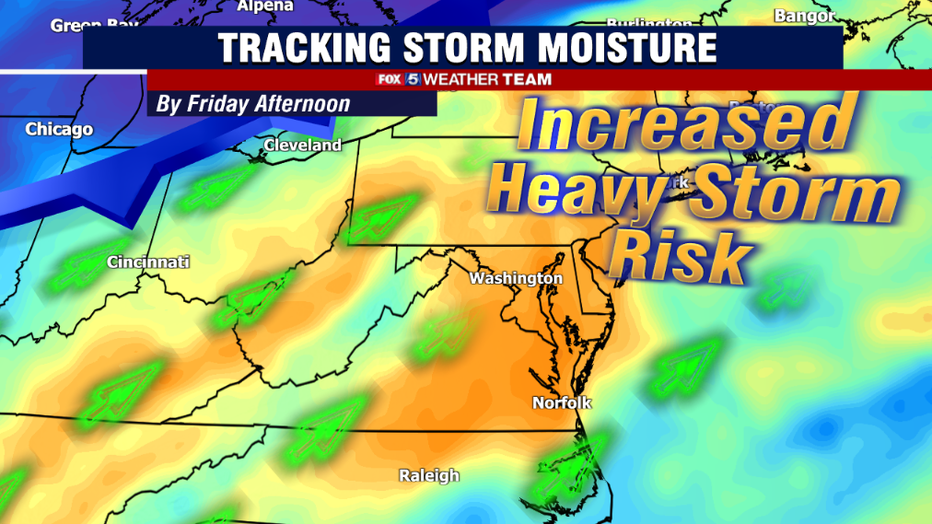 This changes by the end of the week as the expanding Bermuda High shifts winds out of the southwest, bringing higher humidity, and more moisture available for storms to tap into.

As we approach the weekend, a zone of drier air will try to cross the Great Lakes and spill into the region. Dry air is denser than moist air, and thus as this direr air mass tries to push into our region, it will slide underneath the moist air mass, forcing it to rise. This rising motion is expected to cause more widespread showers and storms. This threat is particularly notable on Friday with the initial push of drier air in the afternoon.

High moisture over our region as this frontal boundary crosses has already prompted the National Weather Service to place our region under an elevated risk for excessive rainfall on Friday afternoon, meaning some storms could have some extremely heavy downpours which could lead to the threat of Flash Flooding. In addition, some storms could contain some damaging winds. It is a threat we will continue to monitor throughout this week. 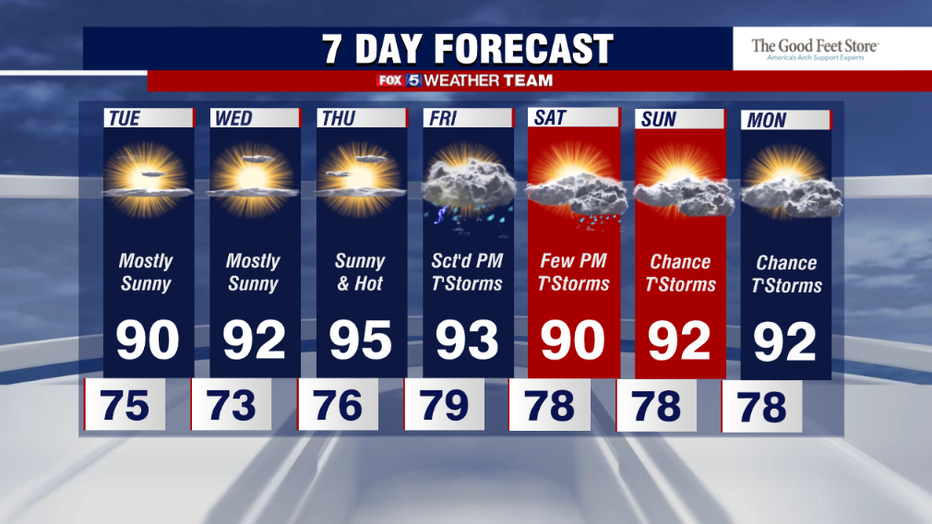 After this system passes on Friday, the weekend will start off feeling a touch better Saturday morning before humidity quickly returns throughout the course of the day. Unlike the front end of the heatwave, the latter half of it will be met with more unsettled conditions. This includes the weekend.

While we are not expecting Saturday or Sunday to be a washout, if you are trying to make outdoor plans just be aware that scattered thunderstorms will be possible each afternoon as the heat and humidity of the day peaks. Have a backup plan indoors in case thunder should interrupt those afternoon summer plans.

Current model projections are that this heat wave will have a similar length to the one in July, lasting through the early to middle part of next week. Stay cool!