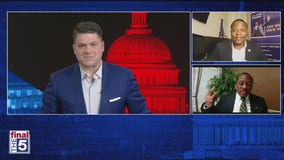 When President Trump and Democratic nominee former vice president Joe Biden met during last night second and final presidential debate in Nashville, Tennessee, the evening included a heated exchange on the topic of race relations. Former Michigan state representative Brian Banks and Republican congressional candidate Joe Collins joined Jim on a special late night edition of "The Final 5" to break down to the bait and what it means for the African-American community. 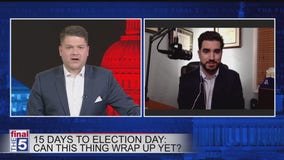 With the election two weeks out, there are both parallels and stark differences from where we were in the 2016 election. What issues will guide people to the polls? Republicans have pushed corruption allegations against Joe Biden and his son Hunter, and Democrats are trying to avoid fatal campaign errors from 2016. Siraj Hashmi from the Washington Examiner joined Jim to break down what could change the race, if anything, and why things may not actually be over until way after Election Day. 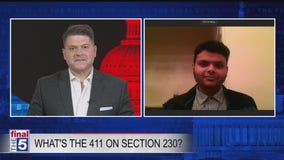 Social media companies like Twitter and Facebook came under heavy scrutiny this week for suppressing sharing of a New York Post story critical of Hunter Biden’s dealings with a Ukrainian energy company. The platforms said they violated policies on disseminating hacked materials, but it renewed calls by Senate Republicans for the F.C.C. to rework the legal framework known as Section 230, which provides them legal cover. Satya Marar from Young Voices explains what Section 230 is about, and the politics of it all on The Final 5. 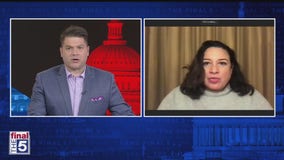 Thousands are expected in the District this weekend, as well as at satellite marches, for another iteration of the Women’s March. Between the Presidential race, and the confirmation hearings of Supreme Court nominee Judge Amy Coney Barrett, organizers say it’s about progressive women making their voices heard. Executive Director Rachel O’Leary Carmona joined Jim on The Final 5 to talk about why it’s important to do it now, and what she has to say to conservative groups planning their own rival march this weekend at the Supreme Court. 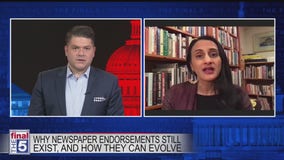 Editorial pages across the country are embarking on the time honored tradition of endorsing presidential candidates, but in an age of increased accusations of media bias, are they still relevant? The Boston Globe decided to take a different tack in their endorsement efforts this year. Editorial page editor Bina Venkataraman joined Jim Lokay on The Final 5 to talk about the process of endorsements, what readers should know about the difference between what’s news and opinion, and how to keep the process fresh. 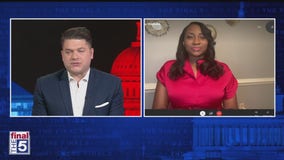 As opponents of President Trump and Supreme Court nominee Judge Amy Coney Barrett plan another iteration of the Women’s March this weekend in Washington, D.C., another march aims to show support for Barrett and conservative policies. The “March for All Women” will start at the Supreme Court on Saturday. Patrice Onwuka of the Independent Women’s Forum joined Jim on The Final 5 to explain why it’s important to hold the march, why Judge Barrett’s nomination should not be delayed, and how she believes a constituency that overwhelmingly opposed President Trump in 2016 may evolve in 2020. 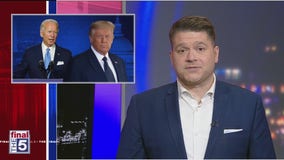 Democrats and Republicans are prioritizing everything but what matters most to Americans. As both parties bicker over the finer points of a potential COVID-19 stimulus package, millions of Americans are caught up in the crossfire. Jim Lokay offered his thoughts on The Final 5. 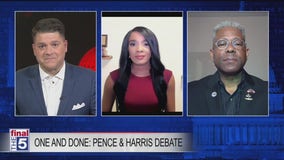 The first and only vice president of the bed is in the books. Unlike the contentious face-off between President Trump and former VP Joe Biden, the exchange between Vice President Mike Pence and Democratic presidential nominee Senator Kamala Harris was far more substantive, even if a bit contentious at times. Jim broke it down with Democratic commentator Ameshia Cross and Texas GOP party chairman Allen West. 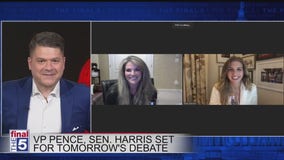 As Vice President Mike Pence and Democratic VP nominee Sen. Kamala Harris prepare for their first and only faceoff on Wednesday in Utah, there are plenty of questions as to what’s at stake. Political strategists Kelly Gibson and Tracy Dietz joined Jim on The Final 5 to talk about the potential dynamic between the two candidates, how coronavirus will figure into the debate, and how it could shape up to be a more substantive matchup than last week’s Presidential debate. 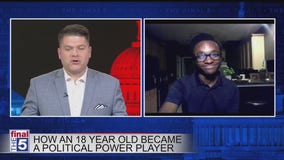 It is hard enough to get a new generation of voters registered to vote, let alone engaged in the process. Niles Francis took his interest in politics to an entirely different level, and now at 18, he’s become a respected political commentator, and creating widely circulated electoral maps for DecisionDeskHQ.com. He joined Jim on The Final 5 to explain where his fascination with politics came from, and how he feels about his home state in Georgia becoming an epicenter for the 2020 race. 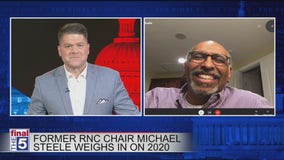 He was the first African-American elected statewide in Maryland, and the Republican National committee chairman — so why is Michael Steele now working to defeat President Trump? He joined Jim on The Final 5 to look at the race, how to campaign in the face of the President’s COVID-19 diagnosis, and whether he might be considering a run for Maryland Governor in 2022. 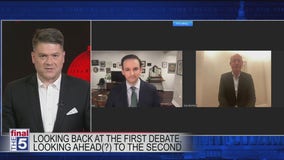 With the second presidential debate set for October 15, much of the attention has been directed towards the Commission on Presidential Debates, and the proclamation today that it will make changes to the format to ensure there won’t be a repeat of Tuesday night’s circus atmosphere. Dan Eberhart and Alex Tureman joined Jim on The Final 5 to talk about what went right, and what should change for the next time the two candidates meet. 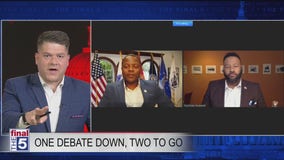 “A hot mess.” That’s how DC Democrat Troy Prestwood describe the first general election debate. After the showdown between President Trump and former Vice President Joe Biden, what did voters take away, if anything? Prestwood and California Republican congressional candidate Joe Collins joined Jim live on the Final 5 to break it down 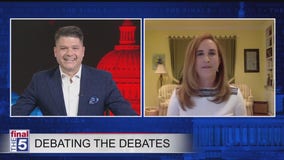 Two candidates, two podiums, and a moderator – but putting together a Presidential debate takes a lot more than that. On the eve of the first Presidential election of the 2020 cycle, Jim Lokay talks with Betsy Fischer Martin about what goes into making sure they go out without a hitch. Martin, the executive director of the American University Women and Politics Institute, is also the former executive producer of NBC’s “Meet the Press,” and she shares her experience preparing for a 2008 debate with moderator Tom Brokaw. 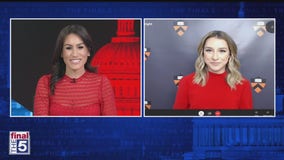 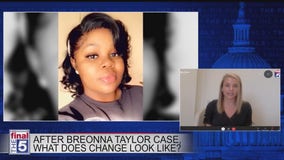 The decision to only charge one police officer in the Breonna Taylor case on charges unrelated to her shooting triggered vocal protests and violent outbursts in Louisville. But as tempers continue to rage, the question is, what changes could this spur in the nation’s legal system, especially in such a divided time? Young Voices senior contributor and Libertas Institute criminal justice policy analyst Molly Davis joined Jim on The Final 5 to offer some ideas. 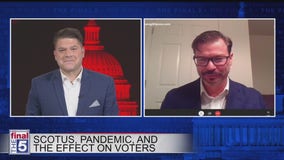 As national Democrats and Republicans continue posturing on the Supreme Court vacancy left by the late Justice Ruth Bader Ginsburg, there are still some surprises when it comes to ordinary voters and how it may affect their votes. Cliff Young from Ipsos Public Affairs joined Jim on the Final 5 to break down the latest from the pulse of the people, including whom Americans really trust when it comes to a COVID-19 vaccine. 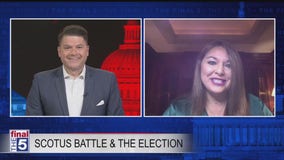 There was already a lot of attention being paid to swing states like Pennsylvania, Michigan, and Ohio ahead of next month’s election. Now, the ongoing battle over confirming a replacement for Justice Ruth Bader Ginsburg could add an entirely new dimension to the election. Former Ohio Senate minority leader Capri Cafaro joined Jim on The Final 5 to explain what might matter most to voters. 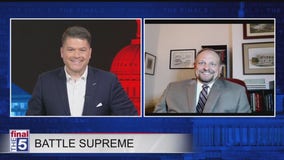 Senate Republicans say they already have the votes for a Supreme Court nominee that hasn’t even been chosen yet, but Democrats are vowing a fight anyway. With President Trump seemingly holding all of the cards en route to a third Supreme Court justice, Jim Copland from the Manhattan Institute joined Jim on The Final 5 to break down why it’s not a done deal just yet. Plus, they talk about the pros and cons of the top contenders for the high court, and why Democrats and Republicans see the back and forth as beneficial for their hopes of controlling the Senate come January. 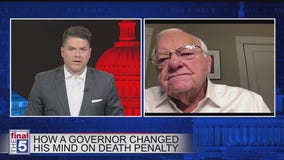 As a lawmaker in the 1970s, George Ryan voted to reinstate the death penalty in Illinois. But two decades later, as governor, he was faced with a dilemma over whether or not it was being applied equally and correctly. He joined Jim on The Final 5 to talk about what changed his mind, his time in federal prison, and his new book, “Until I Could He Sure.”