LANDOVER, Md. - Less than a week after being stripped of his captaincy and fined for violating protocol during a pandemic, Dwayne Haskins was stripped of the ball, threw two interceptions and lost his starting job, maybe for good.

Haskins' failed second chance coupled with a special teams blunder and defensive miscues added up to Washington blowing its first chance to clinch the NFC East by losing to the Carolina Panthers 20-13 on Sunday. Falling flat with a chance to win and get in came with one silver lining: Washington can still finish atop the division and make the playoffs by beating Philadelphia in the season finale. 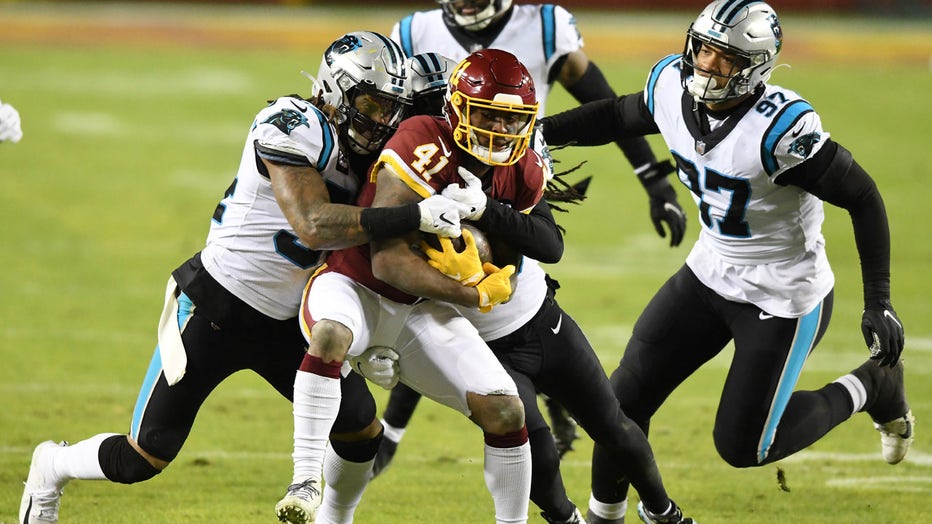 J.D. McKissic #41 of the Washington Football Team is tackled against the Carolina Panthers during the third quarter at FedExField on December 27, 2020 in Landover, Maryland. (Photo by Mitchell Layton/Getty Images)

"What was frustrating was we just didn’t play championship-caliber football," coach Ron Rivera said. "We still control our destiny. That’s the truth of the matter. We have one more game to play. It’s a very important game."

So was this one, and Rivera opted to start Haskins in the aftermath of the 2019 first-round pick partying with several people without a mask and being docked $40,000 for breaking COVID-19 rules. Haskins rewarded his coach by turning the ball over three times in the first half and was 14 of 28 for 154 yards before Rivera pulled him for Taylor Heinicke.

"We just weren’t clicking," a despondent Haskins said from his home long after the game. "Very disappointing. We fell short. I should’ve played better."

By the time Heinicke entered early in the fourth quarter with Washington down 14, it was too late. Haskins' mistakes, Steven Sims' muffed punt that turned into a Panthers touchdown and the defense's early struggles made it too deep a hole to dig out of.

"There’s nothing harder than coming out cold, haven’t been on a team in a year and a half and come in in the fourth quarter and try and get something done," Heinicke said.

With Rivera looking to get into the playoffs by beating his former team, the scene was instead eerily reminiscent of four years ago when Jay Gruden-coached Washington lost a potential win-and-in Week 17 matchup against the Giants, who like Carolina had nothing to play for.

New York's loss earlier Sunday at Baltimore put the NFC East squarely in focus for Washington (6-9), which now must beat Jalen Hurts and the Eagles next week to wrap up the NFL's weakest division.

"I believe in this team," Washington safety Kamren Curl said. "We just got to get ready for the Eagles and go get a spot in the playoffs."

Carolina (5-10) snapped a three-game skid behind 197 yards passing from Teddy Bridgewater and an opportunistic performance on defense and special teams. With Christian McCaffrey out again, Curtis Samuel had five catches for 106 yards and was the Panthers' leading rusher with 52 yards on seven carries.

"That, to me, is how most teams win in December," coach Matt Rhule said. "Lots of things happen early in the year, but the good teams in December, they run the football, they play defense, they take the ball away."

Keenly aware the Panthers have eight losses this season with a chance to tie or take the lead late in the fourth quarter, Bridgewater made sure they weren't in that spot this time. Bridgewater completed 12 of 18 passes in the first half, throwing a 14-yard TD pass to Robby Anderson and leading another scoring drive.

Rookie Chase Young was Washington's best player in his first game since replacing Haskins as a captain. The No. 2 pick forced Bridgewater to fumble on a sack in Washington territory early in the third quarter to prevent Carolina from putting up even more points. The offense scored on the ensuing drive.

"It's an honor," the 21-year-old said. "Only thing that gives me is just motivation to keep going and keep doing everything right and keep playing hard."

Carolina players and coaches wore "Rivera Strong" sweatshirts during pregame warmups to pay tribute to the team's former coach, who underwent treatment for a form of skin cancer earlier this season. Rivera coached the Panthers for almost a decade, a stint that included a 15-1 season with a trip to the Super Bowl five years ago.

Panthers: LT Trent Scott left early in the third quarter with a shoulder injury and did not return. Scott was already filling in for injured starter Russell Okung, who was inactive.

Washington: Gets another chance to win the NFC East next Sunday at Philadelphia.