CHARLOTTE, N.C. - Taylor Heinicke was by far the lesser-known of the two quarterbacks making their return to Charlotte on Sunday.

But it was Heinicke who upstaged Cam Newton by throwing for 206 yards and three touchdowns against the league’s top-ranked pass defense, helping Washington spoil the 2015 MVP's return to Bank of America Stadium with a 27-21 win over the Carolina Panthers on Sunday.

Terry McLaurin had five catches for 103 yards and a touchdown as Washington (4-6) piled up 369 yards of offense. 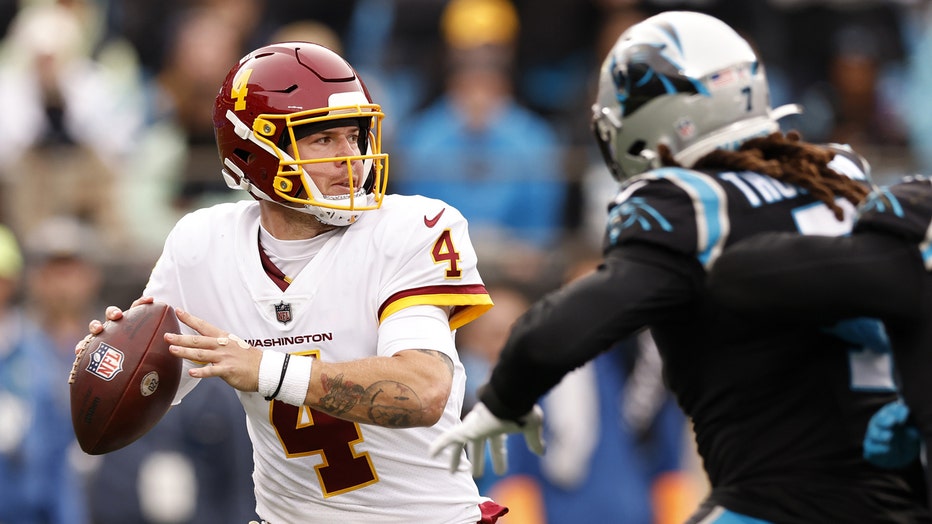 Taylor Heinicke #4 of the Washington Football Team drops back to pass against the defense of the Carolina Panthers in the fourth quarter of the game at Bank of America Stadium on November 21, 2021 in Charlotte, North Carolina. (Photo by Grant Halvers

Heinicke said winning at Carolina "didn't mean that much" to him personally because he only spent one season here in 2018. But he knows it was important to his teammates and coaches who have ties to Carolina, including coach Ron Rivera, who was 76-63-1 in nine seasons with the Panthers and led them to an NFC title in 2015 with Newton at quarterback.

"To know we were going to win with those last two kneel-downs was nice," Heinicke said.

"I felt good. I really did," said Rivera, who was cheered by the crowd before the game. "It was fun. And it would’ve been disappointing if it went the other way."

Newton is hoping to help steer the Panthers (5-6) toward a playoff run in his first start since returning to Carolina, where he spent nine previous seasons.

And he provided some big moments, throwing for 189 yards and two touchdowns and running for a 24-yard score that he celebrated by running to the team's logo at midfield, slamming down the ball and doing his Superman impersonation by pretending to rip open his jersey.

But Newton’s final two potential game-winning drives ended when the Panthers turned the ball over on downs. Daron Payne and James Smith-Williams sacked Newton with 1:11 left to seal the game for Washington.

Panthers coach Matt Rhule said he stuck with Newton on the final two possessions even though the QB doesn’t have a full grasp of the team’s two-minute offense after joining Carolina 10 days ago.

"Being able to get completions is something that every two-minute offense is predicated off of," Newton said. "It's just the little minute things that come down signals and things like that. I have to get in the book and really get a grasp on it."

Christian McCaffrey combined for 119 yards from scrimmage and a touchdown for the Panthers.

Heinicke played one of the best games of his career, finishing with a QB rating of 141.3.

After Newton connected on a 27-yard touchdown pass to McCaffrey down the seam to tie the game at 21 midway through the fourth quarter, Heinicke led Washington into Carolina territory behind a scrambling fourth-and-2 completion to tight end John Bates and a first-down run on a bootleg. That set up former Panther Joey Slye's go-ahead 36-yard field goal with 4:13 left in the game.

"Those plays are kind of like backyard football," Heinicke said. "You’re just trying to make something happen. I remember doing that in the backyard as a little kid at halftime of the Packers games."

Panthers cornerback Donte Jackson said he’s impressed with how much Heinicke has improved since he left Carolina.

"You can always count on him to be a fighter, a competitor," Jackson said. "He just plays to win. It doesn’t matter if he has to hand it off 100 times or throw it 100 times. He really competed for those guys today."

Newton has now lost nine straight starts with the Panthers dating to the 2018 season.

Still, Rhule said he was pleased with the quarterback’s performance.

"I thought Cam was excellent," Rhule said. "From where we are, being a week into it, I thought he did a nice job."

Washington running back Antonio Gibson was benched late in the first quarter after he fumbled in the red zone, but came back to finish strong with 95 yards on 19 carries. Washington ran for 190 yards as a team.

"Defensively, we couldn't get off the field," Rhule said.

HOME NOT SO SWEET

After starting 2-0 at home, the Panthers have lost four straight at Bank of America Stadium.

"It sucks that we play so well on the road and then we come home and we just don't play with that same fire," Jackson said. "The fans did their part. We didn't do our part."

Washington: C Tyler Larsen (knee) and RT Sam Cosmi (hip) left the game in the first half with injuries and did not return. ... WR Curtis Samuel (groin) was declared inactive again.

Panthers: LT Dennis Daley (glute) left in the first quarter and did not return. ... RG John Miller returned to the starting lineup after missing the last three games with an ankle injury.

Panthers: At Miami on Sunday.