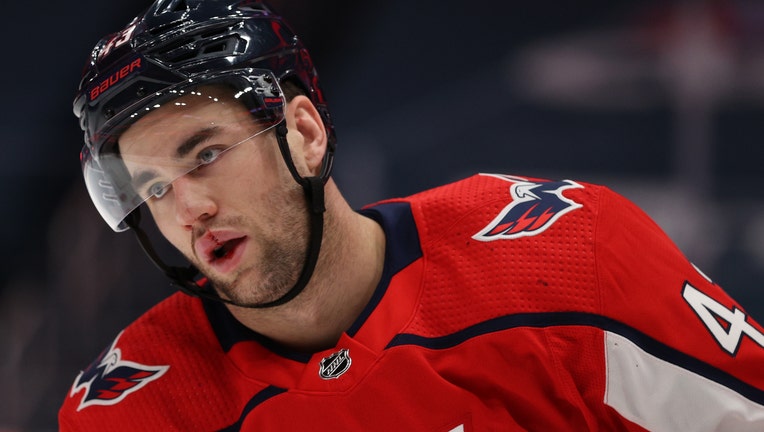 Tom Wilson #43 of the Washington Capitals looks on against the New York Rangers during the first period at Capital One Arena on February 20, 2021 in Washington, DC. (Photo by Patrick Smith/Getty Images)

Washington Capitals forward Tom Wilson was offered an in-person hearing with the NHL Department of Player Safety over a nasty hit on Boston Bruins Brandon Carlo that sent the young defenseman to the hospital Friday night.

The league said Saturday that Wilson will have a hearing at a later date which he will be able to attend via Zoom regarding the hit on Carlo -- an indication that a serious suspension is being considered.

The two-game series between the Bruins and Caps was heated from the start, with Alex Ovechkin getting fined for slashing Trent Frederic in the groin but things quickly escalated two days later when Wilson smashed Carlo’s head into the glass with 90 seconds left in the first period.

Bruins coach Bruce Cassidy said Carlo went to a hospital in an ambulance. Asked if it was a concussion, Cassidy said: "You can probably make your own call on that, considering the hit was directly to his head."

"Defenseless player, predatory hit from a player that’s done that before," Cassidy said. "I don’t know why they didn’t call it on the ice. It’s out of our hands after that, we’ve just got to play hockey."

The Bruins got their revenge with a 5-1 win over the Capitals but not before Jarred Tinordi and Trent Frederic each dropped the gloves with Wilson.

"How close this group is, I’m not surprised to see the boys respond in a big way after one of our guys goes down," Tinordi said. "You can’t have guys taking liberties with our players out there."

During his eight-year career with the Capitals, Wilson has been one of the most penalized — and most suspended — players in the NHL. He is 10th among active players for penalty minutes, trailing only those who have been in the league five or more years longer than him.

He was suspended four times between September 2017 and October 2018 -- a fact that will likely impact the length of a possible suspension for the hit on Carlo.