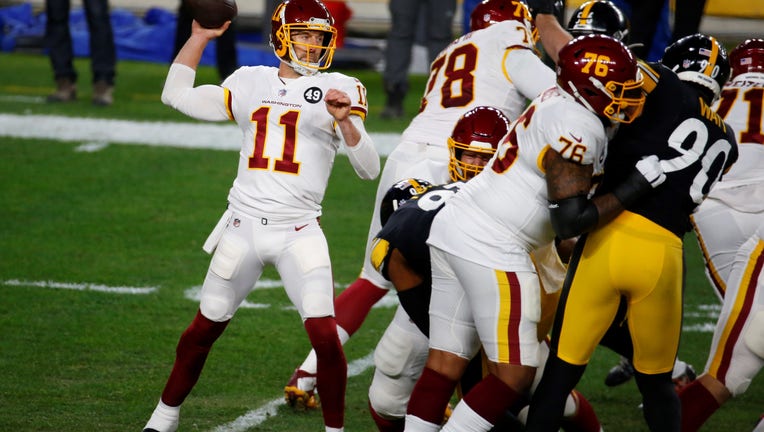 Alex Smith #11 of the Washington Football Team in action against the Pittsburgh Steelers on December 8, 2020 at Heinz Field in Pittsburgh, Pennsylvania. (Photo by Justin K. Aller/Getty Images)

WASHINGTON - The Washington Football Team is riding high after its upset win over the Pittsburgh Steelers, but will have to keep rolling Sunday to keep its playoff chase within reach.

In a sign it's 2020, the game will be played at State Farm Stadium in Arizona due to California's COVID-19 restrictions.

Washington is looking for its 4th-straight win, and San Francisco (5-7) has been plagued by injuries all season.

But San Francisco still has plenty of talent, and plays in the much more challenging NFC West.

And emerging rookie running back Antonio Gibson, who leads all rookies this season in rushing touchdowns, is out today for Washington.

The 5-7 Football Team remains tied for the division lead with the New York Giants, but New York holds the tiebreaker because of its two wins over Washington this season.

Since the Giants lost to Arizona today, the Washington Football Team can retake the NFC East lead with a win today against San Francisco.

Check out Rick "Doc" Walker's keys to the game below, and be sure to tune in to the game this afternoon on FOX 5: