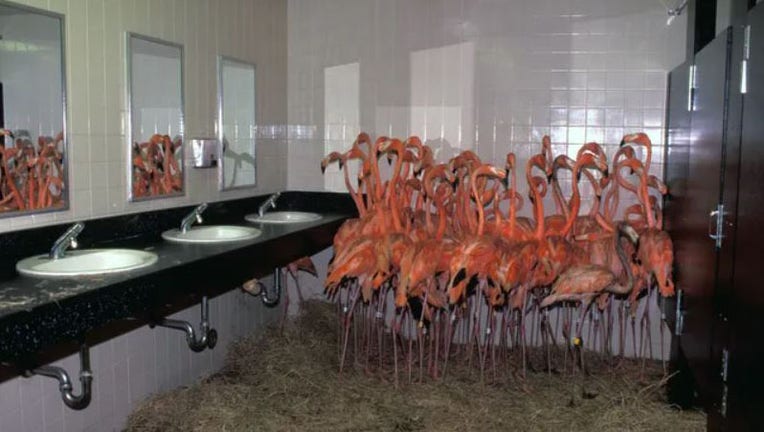 MIAMI - When Hurricane Andrew made landfall in South Florida on Aug. 24, 1992 with 165 mph winds, the storm demolished the Miami Metro Zoo flamingo habitat, leaving birds exposed to the storm and sending zoo workers searching for a new place to shelter the long-necked beauties.

Magill, who has been with the zoo for 40 years, described coming up with a quick plan to shelter the flamingos in the zoo's restrooms in the wake of the monster Category 5 hurricane. In a pinch, it would do. The zoo staff worked to round up dozens of flamingos and get them to their temporary hurricane shelter.

"I remember catching these flamingos, you know, was a big thing, catching them and putting them in the bathroom," Magill said.

Magill's image of the birds huddled in the black-and-white bathroom is legendary in Florida.

"I saw all these flamingos standing there next to the sink, next to the stalls. And I said,' I'm just going to take a quick picture of that.' They were hiding under the sink, looking at us like, ‘this is not where we belong.’ But, you know, at the end of the day, it did save their lives."

Zoo Miami is ready for the next hurricane

Thirty years later, everyone at Zoo Miami is ready for the next major hurricane, including the flamingos.

After Hurricane Andrew destroyed the flamingo habitat, the zoo built a new storm-proof habitat. Construction on the new exhibit began in 2013, and it's now home to more than 40 flamingos.

Ahead of the 30-year mark, FOX Weather Hurricane Specialist Bryan Norcross got a tour of the new aviary.

"This is the aviary that replaced the one originally built for $3 million. And this one cost us $13 million," Magill told Norcross. "Look at these center poles here. These are all constructed of metal. They meet a building code that is, I believe, one of the strictest in the nation right now." 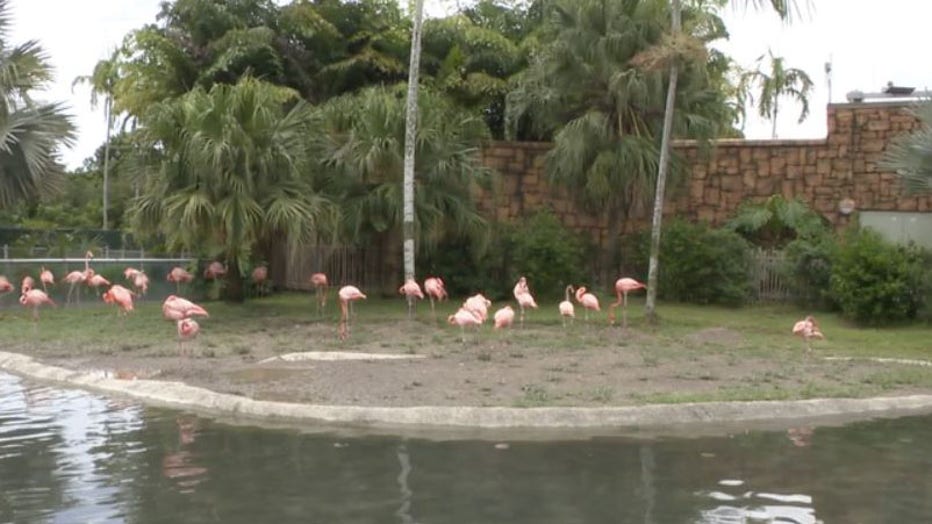 The new Zoo Miami Flamingo exhibit has a block house where the birds can shelter in a storm. (Image: FOX Weather)

Hurricane Andrew was a guiding factor in reconstructing the aviary. Before Andrew, the flamingos were out on the open lake near the zoo entrance, which meant they were exposed in a storm and needed to be wrangled and moved to safety.

HERE’S HOW TO PREPARE FOR HURRICANE SEASON NOW

The new flamingo exhibit was designed to include a building near the lake. The flamingos have been trained to go into the building. 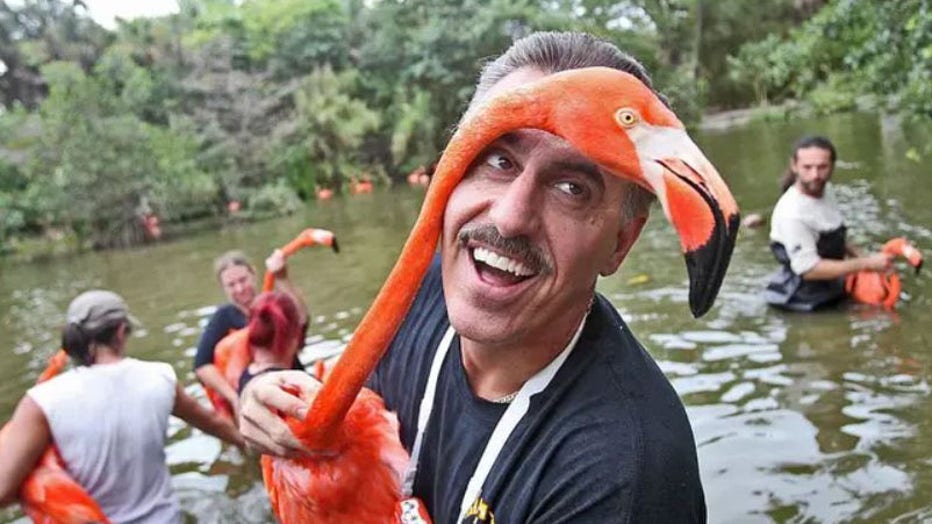 "The flamingos can be … herded right into that building. So we don't have to go through the stress of catching them out here anymore," Magill said. "They're locked in there, and they'll be safe, hopefully, during a future storm."

Three decades ago, renowned hurricane specialist Bryan Norcross did a 23-hour marathon broadcast as Hurricane Andrew slammed into the Florida coast. His broadcast was the only one to stay on the air and many people’s only link to the outside world during the worst of the storm.  He is credited with saving countless lives due to his life-saving advice. Now, 30 years later, Bryan will re-live the storm that devastated South Florida and look at the infrastructure changes that resulted. Watch The Wrath of Hurricane Andrew: Tragedy and Triumph on FOX Weather, premiering August 23rd and 24th at 10 P.M. EDT.