Woody Williams lies in honor at US Capitol

FOX 5's Tom Fitzgerald was at the U.S. Capitol on Thursday as Hershel W. "Woody" Williams lies in honor in a touching final tribute to the last Medal of Honor recipient from World War II.

WASHINGTON - Hershel W. "Woody" Williams lies in honor at the U.S. Capitol Thursday as Congress pays a final tribute to the last Medal of Honor recipient from World War II.

The ceremony was held Thursday in the U.S. Capitol Rotunda.

The ceremony which was attended by member of Congress, including House Speaker Nancy Pelosi and Senate Minority Leader Mitch McConnell, paid a touching final tribute to Williams. An Honor Guard carried the flag draped coffin into the Rotunda, making Williams only the seventh private citizen to lie honor in the Rotunda. 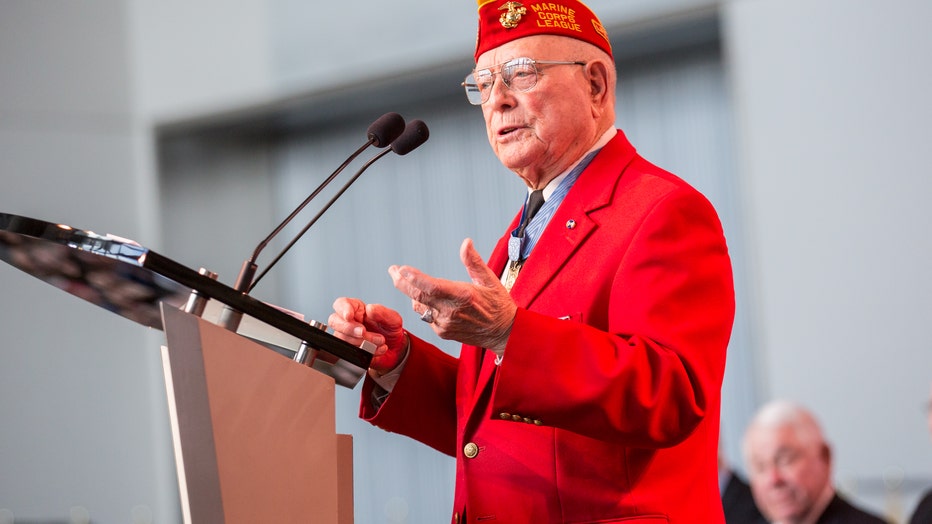 During the ceremony, Congressional leaders remembered Williams for his heroism.

"He was a force of nature on the battlefield. At Iwo Jima Woody marched through a hail storm of gunfire single-handedly destroying seven enemy positions," said House Speaker Nancy Pelosi.

"Corporal Woody Williams even after demonstrating stunning heroism that earned him our nation’s highest honor knew that his own work was not finished either," said McConnell.

WASHINGTON, DC - JULY 14: The flag-draped casket bearing the remains of Hershel W. "Woody" Williams arrives to lie in honor in the United States Capitol Rotunda during a Congressional tribute ceremony on July 14, 2022 in Washington, DC. The last living WWII combat veteran to have received the Medal of Honor, Williams was a Marine corporal during the Battle of Iwo Jima in 1945 when he used his flamethrower to destroy numerous enemy pillboxes while under intense incoming fire for more than four hours. (Photo by Alex Brandon-Pool/Getty Images)

Williams, who died on June 29 at 98, was a legend in his native West Virginia for his heroics under fire over several crucial hours at the battle for Iwo Jima. As a young Marine corporal, Williams went ahead of his unit in February 1945 and eliminated a series of Japanese machine gun positions. Facing small-arms fire, Williams fought for four hours, repeatedly returning to prepare demolition charges and obtain flamethrowers.

Williams will be buried at a private family service.