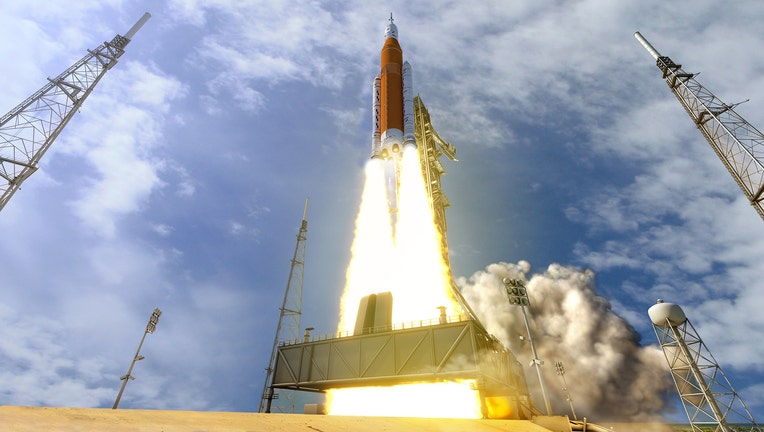 NASA's Space Launch System rocket will launch with Orion atop it from Launch Complex 39B at NASA's modernized spaceport at Kennedy Space Center in Florida. (NASA)

NASA is offering three lucky students a chance to win an all expenses paid trip to the NASA Kennedy Space Center in Florida to watch the Artemis 1 launch, which is scheduled for fall 2021.

The Artemis 1 mission will be “the first in a series of increasingly complex missions,” NASA said in a statement.

“Artemis I will be an uncrewed flight test that will provide a foundation for human deep space exploration, and demonstrate our commitment and capability to extend human existence to the Moon and beyond,” the agency added.

The Artemis Moon Pod Essay Contest was created by a joint effort between Future Engineers and NASA to challenge students to write about “leading a one-week expedition at the Moon’s South Pole,” according to the contest rules.

“Write an essay that tells us about the types of skills, attributes, and/or personality traits that you would want your Moon Pod crew to have and why. How many would be in your pod? Also describe one machine, robot, or technology that you would leave on the Moon to help future astronauts explore,” the rules state.

There will be three separate contest categories based on grade level: Grades K-4; Grades 5-8; and Grades 9-12. Entries may only be submitted by students who are legal residents in the United States.

One specific stipulation that the rules noted was that anyone who is related to or lives within the same household as an employee at NASA or Future Engineers will not be allowed to enter the essay contest.

All contestants will be required to submit an essay which should include a title that is no more than 75 characters and a predetermined word count, which differs for each grade category:

Another important condition that was highlighted in the contest rules is that entrants must not reveal their names or addresses for privacy reasons.

“Don’t write your name, or anyone else’s name (eg. your friend, teacher, or parent) in your essay or title,” the contest rules state. “Don’t submit an address, email address, phone number, or any combination of information that could be used to identify or contact a student.”

There will potentially be a total of 168 winners consisting of 156 semifinalist winners who are eligible to win an Artemis prize pack with a retail value of $375, as well as four free invitations to Artemis Explorer virtual sessions with NASA experts.

NASA: Go Forward to the Moon

NASA is going to the Moon and on to Mars, in a measured, sustainable way. Working with U.S. companies and international partners, NASA will push the boundaries of human exploration forward to the Moon. (Source: NASA)

Nine finalists winners will receive a three day, two night all expenses paid roundtrip to the NASA Johnson Space Center in Houston, TX, “to learn about Artemis and moon exploration.” Winners can bring one parent as a guardian for the trip.

The three grand prize winners will get a three day, two night all expenses paid roundtrip to Kennedy Space Center where each winner, as well as up to three additional family members, will get to watch the Artemis 1 launch into space.