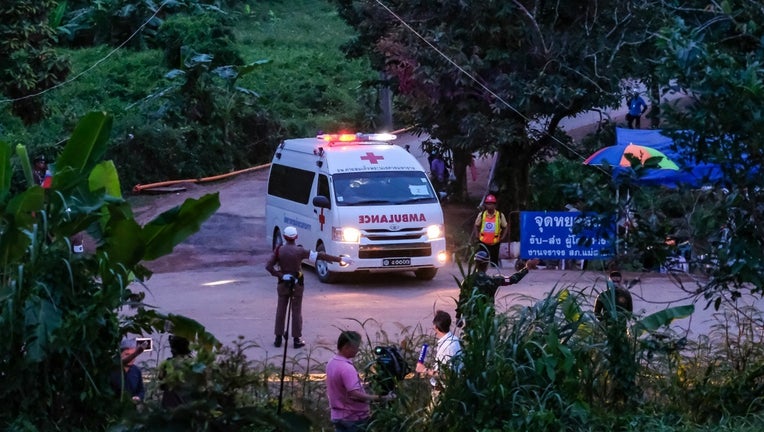 NEW YORK (AP) - - The 12 youth soccer teammates who were trapped in a flooded Thai cave for more than two weeks are finally out, and now they are being closely monitored in a hospital.

The boys - who ranged in age from 11 to 16 - emerged in relatively good shape. Here is a breakdown of the health issues they still face:

WHAT CONDITION WERE THE BOYS IN?

The first eight boys rescued came in with low body temperatures and were provided with heaters, Thai doctors said Tuesday.

One had a low heart rate, and one had a scratch on his right ankle. Doctors suspected two had lung infections - probably pneumonia - based on irregular X-rays.

HOW ARE THEY FEELING AFTER TREATMENT?

Overall they were feeling better, with no fever, and were getting around on their own and smiling.

But doctors said the boys were being kept quarantined. Parents were allowed to see them through a glass isolation barrier and talk to them via hospital phones.

It could be at least seven days before they can be released from hospital, said Jedsada Chokdumrongsuk, permanent secretary at the Public Health Ministry.

WHY ARE THEY BEING QUARANTINED?

The boys were malnourished and weak, and doctors are probably worried that they could be susceptible to germs spread by family members or other visitors, said Dr. W. Ian Lipkin, a Columbia University infectious diseases expert.

But it's also possible they are infection risks to others. Thai doctors have said they don't know what type of unusual illnesses the boys may have picked up in the cave.

"We have never experienced this kind of issue from a deep cave," and doctors are running a battery of tests on the boys, Jedsada said.

Bats live in caves. They can spread viruses ranging from rabies to Nipah, which can cause pneumonia, seizures and death. The boys told doctors they did not see any bats or other animals, and experts say it's unlikely bats would dwell as deep in a cave as the boys were.

WHAT LIES AHEAD FOR THE BOYS?

Lipkin said the most likely problems will stem from "the stress associated with this harrowing experience."

One of the Thai doctors said the boys were happy but that psychologists would be evaluating them.

The guided escape was stressful, and Thai Prime Minister Prayuth Chan-ocha said the boys were given an anti-anxiety medication to help calm their nerves.

People who endure such an intense and dangerous event can go on to suffer lasting anxiety, depression and other symptoms of post-traumatic stress disorder. Thailand's Department of Mental Health said hospitals are working with the families to help the boys mentally recover, including by not digging for details about what they endured.