FOX 5's Stephanie Ramirez reports that a woman in Southeast D.C. says the tires were stolen off of her car recently for the third time in nine months.

WASHINGTON - Not once, not twice, but THREE TIMES.

A D.C. woman says the wheels were stolen from her Honda three different times in nine months in the Hill East neighborhood of Southeast D.C.

"I’m just disappointed in society. It’s – you have those experiences where things restore your faith in humanity and this happening over and over again, it’s just disappointing. What a terrible human being to be so incredibly selfish," Kelly Roark told FOX 5 over Zoom on Wednesday.

In surveillance video captured by a neighbor, you can hear Roark’s Honda hit the ground after one suspect lowers the car onto yellow crates. Another suspect is seen still rolling one of Roark’s tires into a silver-colored sedan double parked just behind Roark’s vehicle. 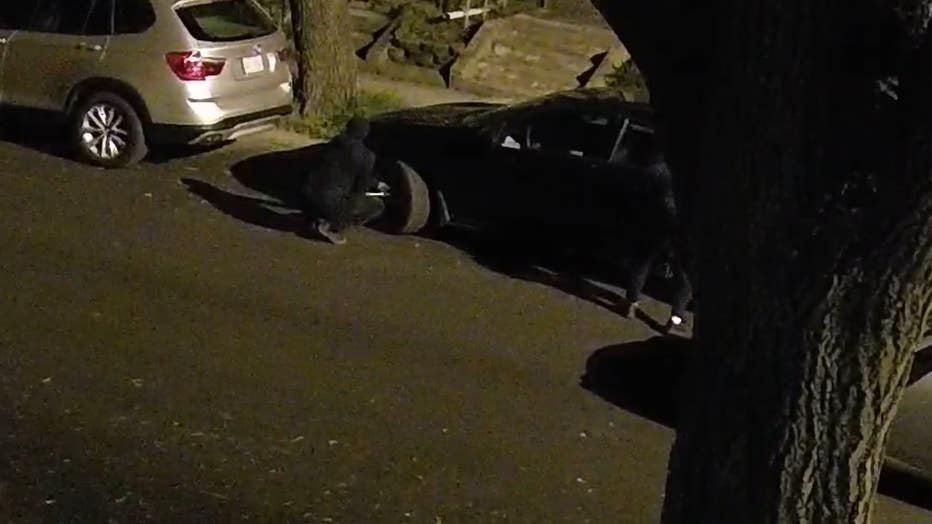 The incident happened at around 3:30 a.m. Tuesday morning near 19th St. SE near the D.C. Armory.

PAST COVERAGE: Car rim and wheel thefts are rising across DC

In this latest incident, surveillance video also shows a silver sedan, similar to the one seen as the two suspects worked on Roark’s wheels, driving around, appearing to scope out the area.

Roark says each time her car was targeted forced her to call out of work, canceling appointments as a pediatric speech pathologist. There are also insurance deductibles that need to be paid. Hill East residents feel they and the Capitol Hill neighborhoods are constantly targeted.

"Every single day I drive by a car that’s on crates. That’s not normal," said Roark.

D.C. Police tell FOX 5 this is a city-wide issue. According to their latest available stats, police say wheel and rim thefts went from 54 thefts reported during a certain period last year (January 1 – April 27, 2021) to 201 thefts reported in the same stretch this year.

"Why?" is the big question.

D.C. police are looking into whether scrapyards are buying the metal rims.

"While there is no specific evidence that this is occurring or has occurred, it is certainly within the realm of possibility," an MPD Spokesperson wrote in an emailed response. "Our detectives have worked diligently to attempt to identify the reasons that these particular products may be of interest or value to thieves.  It’s entirely possible that the wheels would be sold online but, unfortunately, they are extremely hard to track and attribute to a specific theft or owner, due to the lack of serial numbers or other unique identifying features."

FOX 5 spoke to an area tow company owner about the issue.

Ibrahim Aburish, who goes by "@BeeboDC" on Twitter, has been tracking these incidents on both Twitter and TikTok.

"When we used to have our tow truck parts stolen, beacon lights and stuff, back in the day, we used to have to start marking them with VINs and etching codes in them to show that they were ours because they don’t come with it," Aburish said. "So, people are going to have to stop tracking their stuff or air tagging it, or just try to do some identifying marks inside your rims in case, but that’s obviously not going to stop somebody from stealing it … unless they get caught."

Car rim and wheel thefts have been an issue in D.C. for several years, and numbers seem to show the problem is rising.

Aburish told FOX 5 he received a call on Wednesday morning regarding a Honda with both the whole tire and doors stolen.

Roark is hoping neighbors can keep an eye out for the suspect’s silver sedan seen on her neighbor’s surveillance video. She and neighbors believe the vehicle is an Infinity but D.C. Police were unable to confirm the vehicle make or model.

Roark also noted some type of after-market blue light that can be seen when the suspect opens the driver-side door.