Following FOX 5's reporting that a D.C. woman’s Honda wheels were stolen for a third time in less than a year, more viewers have reached out to FOX 5 believing they and others have also been victimized by the same suspects. FOX 5's Stephanie Ramirez reports.

WASHINGTON - After a FOX 5 report revealed a D.C. woman’s Honda wheels were stolen for a third time in less than a year, more viewers have reached out to FOX 5 believing they and others have also been victimized by the same suspects.

The area insurance giant, GIECO, does offer a few tips online on how to try and prevent these wheel thefts, which includes purchasing wheel locks. However, we know in several of these incidents, a single wheel lock on each wheel has not been enough to stop the thieves.

According to a GEICO article, other tips include installing an alarm with a sensor that can "detect a tilt or angle change if thieves try to jack up your vehicle." They also suggest turning your wheels to a 45-degree angle when you park, allowing the fender to help block thieves from accessing certain lug nuts. GEICO also says park as close to the curb as you can. This may make it harder to raise at least one side of your vehicle with a jack. 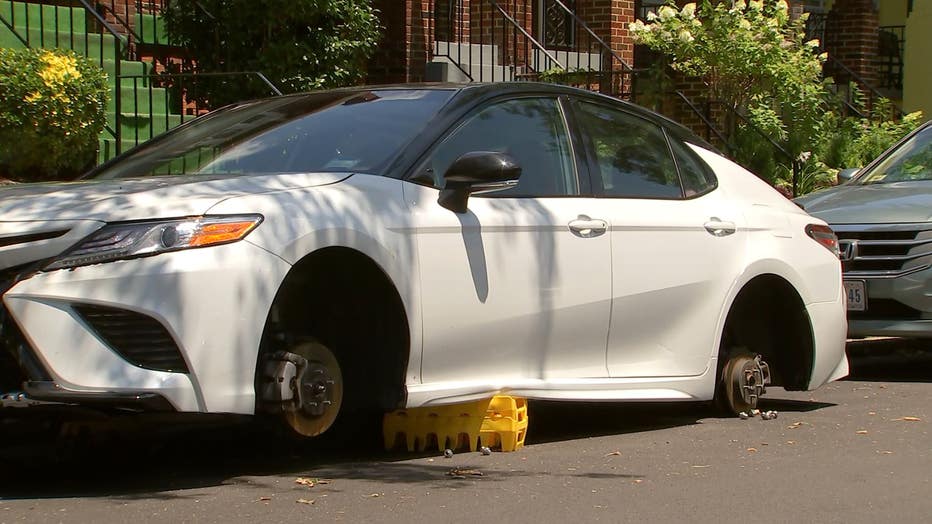 "It definitely makes me feel unsafe for the first time. I’ve lived in D.C. for the last five years. And I’ve lived in this neighborhood specifically for the last four and I’ve always felt comfortable parking my Toyota on the street," said Jessica Hernandez on Thursday, "When you see Teslas and Porsches parked, like you don’t think your car is going to be the one that gets targeted."

Hernandez told FOX 5 the wheels from her Toyota Corolla were also stolen in the early morning of July 12th in the NOMA neighborhood of Northeast D.C. Hernandez told FOX 5 she’s now having to pay a $500 deductible and says area surveillance video she is working-on to get ahold of shows a silver suspect vehicle.

FOX 5's Stephanie Ramirez reports that a woman in Southeast D.C. says the tires were stolen off of her car recently for the third time in nine months.

Back in the Hill East neighborhood, Francis Campbell, tells FOX 5 a Toyota Camry sitting on crates was hit for a second time, with neighbor and the car-owner also waking up to the theft on Tuesday.

"It harkens back to the old days when you know uh, race car drivers could change four tires in up to two minutes. If I didn’t know any better, I’d swear it’s a race car team," said Campbell.