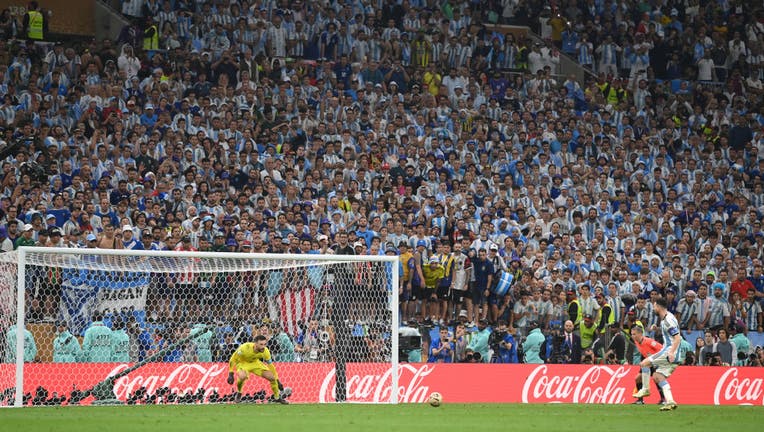 Lionel Messi of Argentina scores his penalty in the shoot out during the FIFA World Cup Qatar 2022 Final match between Argentina and France at Lusail Stadium on December 18, 2022 in Lusail City, Qatar. (Photo by Michael Regan - FIFA/FIFA via Getty Im

Sunday's 2022 FIFA World Cup final between Argentina and France was a truly wild match that left viewers gasping for breath at every turn. There were multiple game-tying goals, a hat trick, late drama and of course, plenty of history on the line: one team was trying to repeat as champion, while the other was hoping to win one for its beloved superstar.

In the end, Lionel Messi claimed the last trophy missing in his remarkable career, as he helped Argentina win its third World Cup title and its first since 1986 when fellow legend Diego Maradona won his only World Cup.

Overall, the match was an all-timer, but was it the best World Cup final in the tournament's history? We looked back at every World Cup final and picked the five greatest. Here is our unscientific ranking of the top final matches in the World Cup's long history.

Although this match is the only one that wasn’t really close in score, there was so much history rolled up in this that it has to be considered an all-time great. To wit:

Overall, this was a historic event and made Brazil the most successful national team with three titles, a distinction it still holds.

Known in German circles as "Wunder von Bern" (Miracle of Bern), this is one of the largest upsets in World Cup history as Hungary was a heavy favorite to claim the title.

This match earned Germany the first World Cup title in its history and remains the only World Cup final where a team overcame a two-goal deficit to win the match (had France won on Sunday, it would have repeated this feat).

Hungary struck twice early taking a 2-0 lead after just eight minutes, but West Germany outscored the Hungarians 3-0 the rest of the way with the final score coming in the 84th minute. A truly epic comeback for the ages.

Considered by many to be perhaps the greatest World Cup match in history, the 1966 final delivered England its first – and only to this point – World Cup. The final was played in its home country at the historic Wembley Stadium, and it started at a frenzied pace with both sides connecting on a goal within the first 20 minutes.

After West Germany tied it in stoppage time to send it to extra time, it was all England. The Three Lions were able to drive home two more scores to take the crown. Those two goals were scored by Geoff Hurst, who became the first player with a hat trick in the World Cup final.

It was an all-around impressive performance played on a country’s home turf and had history all over the place.

This wasn’t technically a World Cup final, but rather a de facto final determined by a final group stage. Because of that, Uruguay needed to beat Brazil and Brazil just needed to avoid defeat to claim the title.

What happened in the match, though, is considered by many to be one of the greatest upsets in soccer history. Uruguay trailed 1-0 in the second half, but scored goals in the 66th and 79th minutes while holding the Brazilians in check to claim the 2-1 victory and title. It was the second title for Uruguay.

Recency bias aside, this is without a doubt the greatest World Cup final in history. There were so many compelling storylines and even more added as the match was played:

Argentina was in control 2-0 before Mbappé laced a penalty kick into the back of the net to halve the deficit for France. Mbappé scored just one minute later in the 81st minute to tie the match with the final heading for extra time.

In extra time, Mbappé would connect on another penalty to tie the match and make him just the second player in World Cup final history with a hat trick (this followed a Messi goal that looked like a fairytale finish). After that penalty score, the title was settled in penalties – both stars converted their kicks, of course – with Argentina coming away with the crown.

Messi winning his first World Cup in the likely final opportunity would have been enough to be among the best finals ever, but the drama, talent and back-and-forth intrigue made this the undisputed best.

Read more from the World Cup: