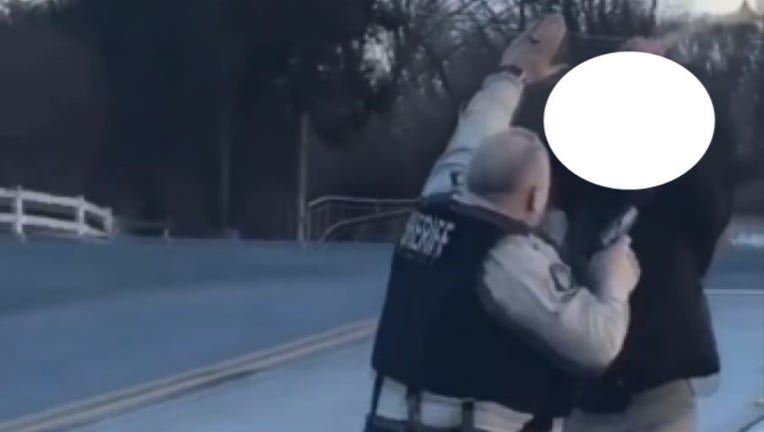 Video posted to social media shows a man hitting a Montgomery County Sheriff's Deputy with a stick before being shot and killed. (Anonymous)

GAITHERSBURG, Md. - Video posted to social media shows a confrontation in the heated moments before a Montgomery County sheriff's deputy shot and killed a man in Gaithersburg.

You can see the man, identified by police as 52-year-old Kevin Costlow of Laytonsville, hitting the sheriff's deputy with a large stick before the shooting.

Police say Costlow hit at leat two other cars with his Volkswagen sedan around 8:01 a.m. Saturday on Maryland State Route 108 near Fieldcrest Road.

Costlow then exited his car and was acting erratically at the scene.

The deputy, who you can see has his gun drawn during the confrontation, shot Costlow after being hit repeatedly with the stick.

Police say Costlow died at the scene after attempted life-saving measures. The deputy who shot Costlow went to a nearby hospital with non-life threatening injuries.

Police say they are still investigating the incident. Findings will be submitted to the Howard County’s State’s Attorney’s Office for review.

Anyone with information on the incident is asked to call Montgomery County Police at (240) 773-5070.

You can watch video of the confrontation here. FOX 5 has blurred Costlow's face and muted the footage's audio: