DC deals with the aftermath of a weekend of mayhem

Police brutality protests devolved into displays of violence and chaos over the weekend - and now DC business owners and municipal personnel are dealing with the aftermath.

WASHINGTON (FOX 5 DC) - D.C. residents and officials were taken aback by the astonishing amount of damage done by looters and vandals amid unrest sparked by the death of Minneapolis man George Floyd.

Block after block of the District’s downtown area is now boarded up or covered with spray paint.

FOX 5 reporter Paul Wagner described the scene on F Street as “stunning” after spending hours in the neighborhood surveying the damage.

D.C. Police Chief Peter Newsham called the vandals antagonists and he says they appear to be organized.

The vandals went from block to block – smashing windows, setting fires and stealing anything they could from inside.

RELATED: DC curfew goes into effect tonight at 7, will last for 2 days

At Bobby Van’s Steak House on 15th Street, Northwest, the managers says looters first smashed the windows, and then had to get through barricades the restaurant had set up before spending hours removing computers, cash registers, and expensive bottles of liquor and wine.

He estimates that the damage could be more than $200,000.
In Georgetown, looters hit several stores, including an Apple store on Wisconsin Avenue. 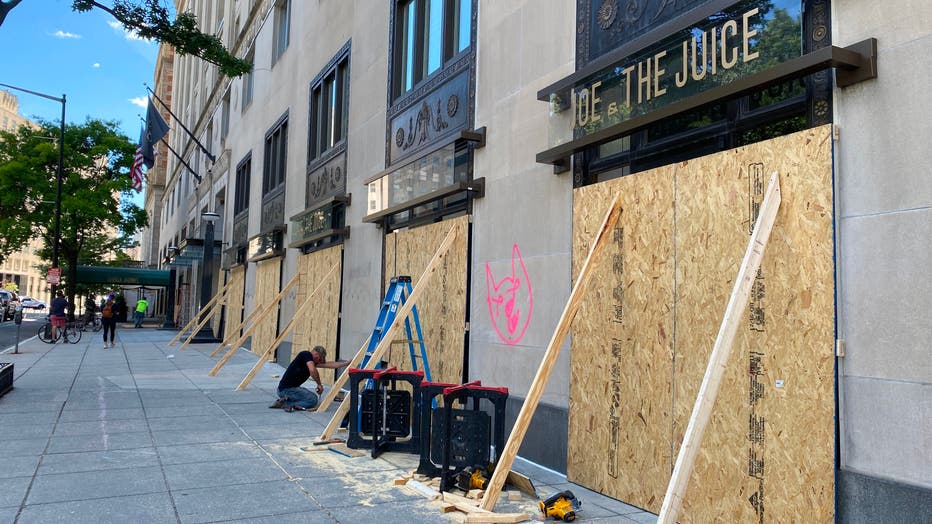 D.C. police investigators are taking full advantage of the cameras at these businesses and have already started putting out pictures in hopes of identifying the culprits.

According to D.C. police, one team of three men vandalized a business in the 1500 block of H Street, Northwest early Sunday morning.

Two others were involved in looting in the 400 block of 8th Street early Sunday morning.

The number of people wearing face coverings may be a hurdle, but the preponderance of surveillance images will be a benefit, Newsham said.

"That will present some problems but I'm absolutely sure that we have images available. We've already put out some preliminary images where the people in those images can be identified. One of the things I did not mention is for those of us who feel the responsibility to make identifications in those cases and I think there will be very few of those we will also be offering a reward of up to a thousand dollars,” he said.

Newsham believes that so far, 88 people have been arrested, and seven officers were injured.