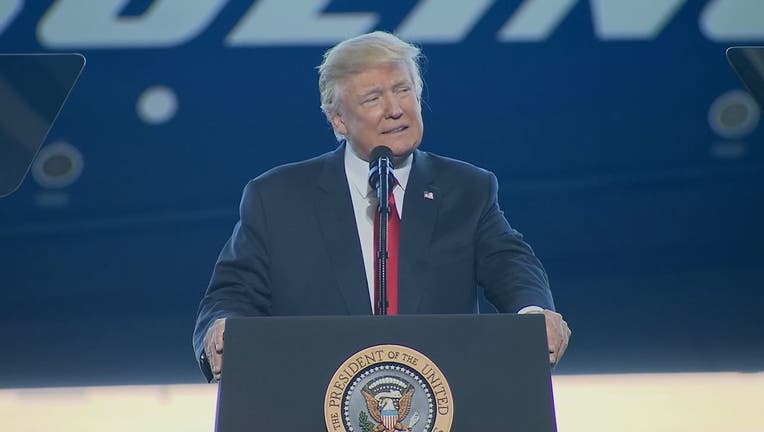 NORTH CHARLESTON, S.C. (AP) -- Hoping to shift attention from his troubled White House, President Donald Trump hit the road Friday to deliver a pep talk to American workers and the rest of the nation, resurrecting the jobs promises that powered his election victory and pledging in a campaign-style rally to "unleash the power of the American spirit."

But he was only a few hours away from the turmoil he has stirred in Washington when he swerved from that positive message to escalate his complaints about news coverage of his young administration.

"The FAKENEWS media ... is not my enemy, it is the enemy of the American People!" he exclaimed on Twitter, singling out The New York Times and TV networks. His latest outburst came a day after he forcefully defended his administration in a marathon White House news conference, brushing aside the tumult, infighting among senior staff and setbacks in courts and Congress.

He took a more upbeat tack in South Carolina.

Trump is expected to stick to the theme Saturday when he holds a big rally in central Florida, a change of scenery that marks an effort to galvanize a month-old White House that has been buffeted by crisis and paralyzed by dysfunction.

The new president toured a 787-10 still under construction and, before leaving, sat in the pilot's seat of a completed airplane painted in contrasting shades of blue that formed the backdrop for his remarks. Some 5,000 employees and others inside a hangar greeted him with chants of "USA, USA."

The president, who owns an airplane but now travels exclusively on government aircraft, praised the Boeing jetliner as "an amazing piece of art." He noted that it's made of carbon fiber, seats 330 passengers, is 18 feet longer than the previous model and can fly for half a day before landing.

"The name says it all. Dreamliner, great name," Trump said. "Our country is all about making dreams come true."

"As your president I'm going to do everything I can to unleash the power of the American spirit and to put our great people back to work," he said. "This is our mantra: Buy American and hire American."

Trump then departed South Carolina for his estate in Palm Beach, Florida, where he plans to spend the holiday weekend. He arrived late Friday afternoon.

In Washington on Thursday, he complained bitterly about news coverage -- and "criminal" leaks from within the government that took down his top national security adviser and revived questions about his own ties to Russia.

FBI Director Jim Comey left a meeting with senators on the intelligence committee Friday afternoon. Neither Comey nor the senators would discuss the subject of the meeting, but it followed reports that the FBI had interviewed Flynn about his contacts in late December with Russian officials.

Trump tweeted Friday that retired Gen. Keith Kellogg, "who I have known for a long time, is very much in play for NSA -- as are three others." Kellogg, who is serving as the acting national security adviser, traveled to South Carolina with Trump aboard Air Force One.

Also along on the Florida trip were Trump's daughter Ivanka; her husband, Jared Kushner, a senior adviser to Trump; White House chief of staff Reince Priebus; and strategist Steve Bannon. Ivanka Trump waved and blew kisses to the crowd as she exited the completed 787-10 Dreamliner before her father did.

The White House said Trump might interview national security candidates at his estate.

In South Carolina, Trump said, "America is going to start winning again, winning like never before," returning to a staple promise from last year's campaign speeches.

In his remarks, Trump also mentioned that he's been in talks with Boeing executives to reduce the cost to the government of building a future Air Force One presidential aircraft. He has denounced the costs as "out of control."

Asked by reporters for an update after Friday's speech, Trump said: "Price is too high. But we're negotiating."

Trump scheduled a campaign-style rally Saturday in Florida, his first as president. The event at an airport hangar in Melbourne will be 1,354 days before the 2020 election. Trump himself promoted his appearance on Twitter: "Looking forward to the Florida rally tomorrow. Big crowd expected!"

Big rallies were the hallmark of Trump's presidential campaign. He continued to do them, although with smaller crowds, throughout the early part of his transition, during what he called a "thank you" tour.

The Florida rally comes as he makes his third weekend trip this month to what he calls his "Winter White House," his Mar-a-Lago resort. White House spokeswoman Sarah Huckabee Sanders said the rally was an example of how Trump plans to "continue taking his message directly to the American people."