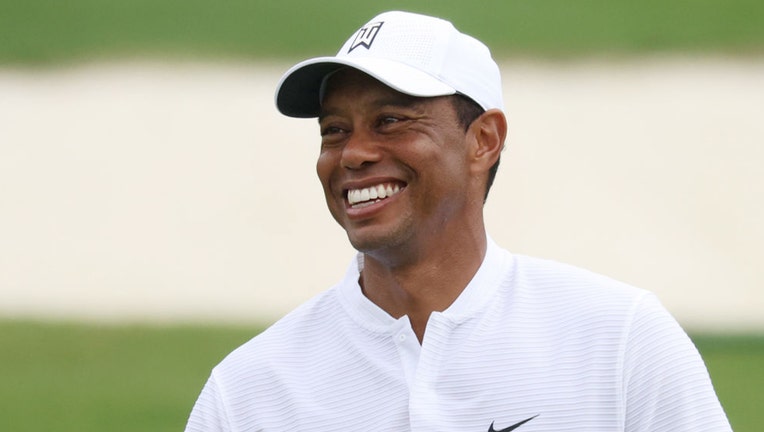 FILE - Tiger Woods of the United States looks on during a practice round prior to the Masters at Augusta National Golf Club on Nov. 11, 2020 in Augusta, Georgia.

Tiger Woods posted an amazing update on his health months after suffering a devastating leg injury in a Los Angeles car crash that put his professional golf career in jeopardy.

Woods posted a video with a two-word message: "Making progress."

The video showed him swinging a golf club and looking like he still has it. It appeared to be the first visual evidence of him hitting a ball and swinging a club since the February crash. He still had the black compression sleeve on his right leg while he was on the course.

He’s been spotted in plenty of pictures and video in recent months walking around. Last week, he was seen with his girlfriend Erica Herman. Woods was walking very carefully while getting out of his car and heading into a hotel.

Questions have surrounded Woods over whether he would continue to pursue Jack Nicklaus’ record for most major titles.

Justin Thomas revealed recently that Woods was "going to try" a comeback.

"I mean, I know that he's going to try. I just, I don't see him ever playing if he can't play well. He doesn't strike me as a guy that's like, he's played at home and he's shooting a bunch of 75s and 76s and he's like 'Alright, I'm gonna give [the Masters] a try this year.' Like that's not really gonna be him, at least to my understanding, or from what I know of him," Thomas said on the "No Laying Up" podcast.

"I think he knows that there's a pretty good chance that that was the last chance he really ever had, before that, of making another run, but at the same time, I know how determined he is and I know he's going to want to at least try to give something again."

Thomas said, ultimately, Woods wants to be the best dad he could be to Charlie, 12, and Sam, 14.

The 2021-22 PGA Tour is already underway with a December break on the horizon. There are 15 tournaments on the docket before the 2022 Masters in April. It appears there’s hope Woods could be back by that time.