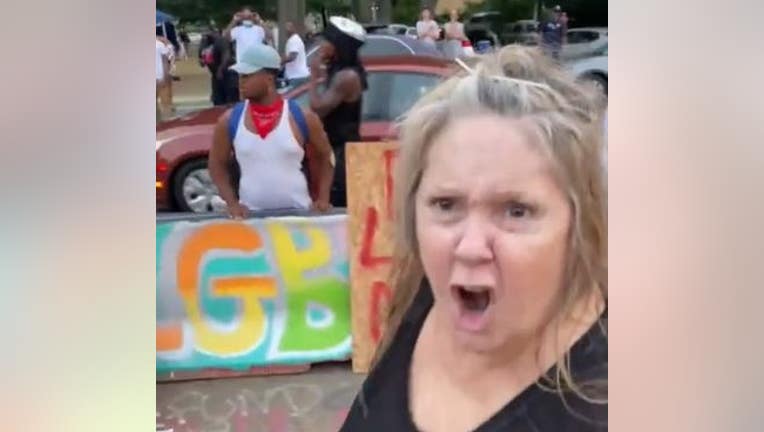 Video shows a woman yelling racial slurs at the unveiling of a hologram of George Floyd in Richmond, Virginia. ( Credit: Mikhail Smith via Storyful)

RICHMOND, Va. - A disturbing altercation was captured on video at the unveiling of a 3D hologram of George Floyd in Richmond, Virginia.

The video, recorded July 28 by Mikhail Smith, shows a White woman yelling at a group of people behind the camera, who appear to be trying to escort her away from the event in honor of Floyd, a Black man who died May 25 while in Minneapolis police custody.

“This is public property. This is my city,” the woman yells, as she pushes away an event attendee.

The racial slur apparently prompted the person behind the camera to begin screaming at the woman, repeatedly saying, “Get the f--- out of here.”

The incident took place near the site of the hologram display of Floyd, called "A Monumental Change: The George Floyd Hologram Memorial Project," according to Storyful.

The memorial was reflected over the Robert E. Lee statue, renamed by Black Lives Matter activists as the Marcus David Peters Circle, in Richmond. It was set to appear this week at five different sites of former Confederate statues across the South.

The hologram forms a 3D image of Floyd out of fireflies and his name in graffiti, reflecting the murals painted nationwide and around the world in his memory.

Floyd died after a White officer pressed his knee on Floyd's neck for several minutes, even as Floyd pleaded that he couldn't breathe. A widely-seen bystander video captured his final moments, igniting nationwide protests over racial injustice and police brutality in America and around the world.