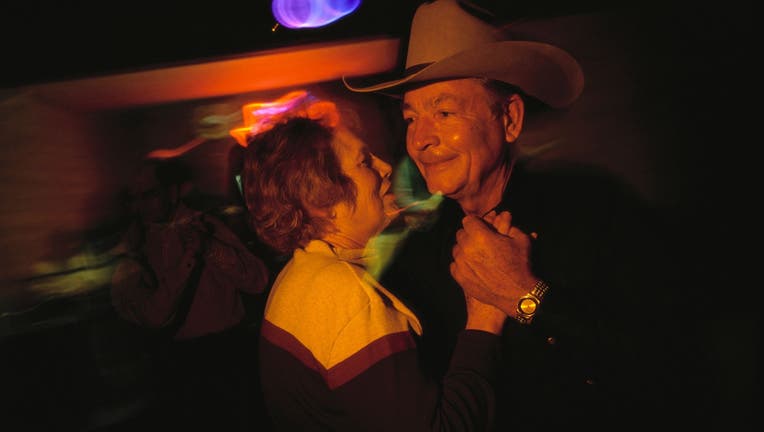 A couple dances to the band Southern Image. The two are attending a Sunday night dance at the Veteran's of Foreign Wars (VFW) hall in Fredricksburg, Texas. (Photo by David Butow/Corbis via Getty Images)

WASHINGTON - "You’re only as old as you feel” isn’t going to fly anymore.

According to a small survey of Americans, there is indeed a certain age when the general public considers you old.

The research, conducted by OnePoll and commissioned by LetsGetChecked, showed that the majority of those polled would consider themselves to be "old" at age 57.

In addition to deciding on the numerical age for “old,” the survey's 2,000 respondents also qualified what that meant. Participants described "old" as having a heightened concern about overall health (39 percent), as well as a variety of more aesthetic concerns such as wrinkles (36 percent), weight gain (36 percent), gray hair (35 percent), hair loss (34 percent) and age spots (34 percent).

Also on the list of aging concerns was the fear of not being able to take care of themselves (34 percent), being seen as “old” by others (33 percent), financial security (33) and losing independence (19 percent), South West News Service (SWNS) reported.

Despite the fears over future finances, nearly half of those polled – 45 percent – said they were not actively saving for retirement.

are taking steps to prepare for their health as they age, with 64 percent saying they felt confident in knowing when they should get tested for certain issues, like breast and colon cancer. According to the American Cancer Society, people should begin getting tested regularly for breast cancer at 40, and colon cancer at 45.

“While the survey shows many people do know when they should be tested, there are still a large number of individuals who aren’t being tested as often as they should be,” said Dr. Robert Mordkin, Chief Medical Officer of LetsGetChecked, an at-home health testing company.

Still, nearly 37 percent admitted to not being tested as often for major health concerns, with 52 percent reporting that it was because they were “too busy to think about preventative health tests.”